As the Yankees of 2016 have trouble early, I start to compare them in my mind to the 1974 Detroit Tigers who stand as the bar for teams that got old all of a sudden.

I started rooting for baseball in 1973 when I was 11 yrs old. The Yankees were a middle-the-pack team; the top teams in the American League were the Oakland A’s, the Baltimore Orioles, Boston Red Sox, and the Detroit Tigers. The Tigers had won the World Series 5 years earlier and the AL East title in 1972.

Here’s what Detroit’s team looked like in 1974, with the age of each player:

The Yankees average age (32) for their starting lineup and bench is older than Detroit’s average age (30). Both teams are near the bottom of the league in batting average (Det was 10th out of 12; Yanks are 11th out of 15) and their On Base Percentage (OBP) is almost identical (.303 vs .304).

This was in the pre-steroid era when 34 was 34 — most hitters’ best years ended at age 34 and they retired — and those rare specimens that continued to play into their late 30’s typically put up inconsistent batting averages and performances; an era similar to the current post-steroid era.

Mark Teixeira and Alex Rodriguez, who both had terrific comeback, monster years last year when they were amongst the leaders in homeruns and RBI the first 3/4 of the season — both look old all of a sudden at 36 and 40. Carlos Beltran, who has seemingly been belting the ball — only has a .276 OBP. 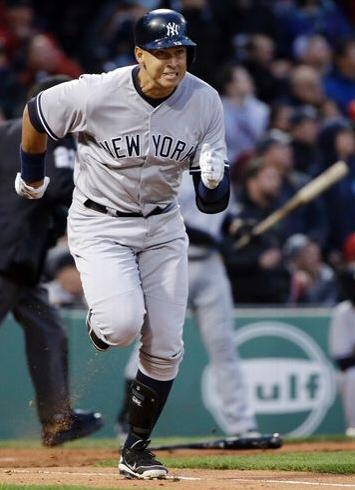 Maybe the scariest player in the lineup is NOT Chase Headley, who is batting .150 but is still getting on base with walks — but Jacoby Ellsbury, who had a brief hitting spurt and stole home one game, but for the most part looks old all of a sudden at 32. And he is signed for this year and another 5 years (5th year is team option) at $21 mil a year!

Some good news is that the Yanks have some youth and mostly decent ages on their pitching staff; Detroit’s staff was older (although pitchers can usually pitch well past 34 unlike hitters). Overall the Yankees, especially with their 3-ace-reliever ballpen, have a better pitching staff than Detroit did.

Here is the 2016 Yankee pitching staff so far:

The Future Back Then for Detroit

Detroit’s fall from grace started a rebuilding period for them that lasted 5 years — they won 74 games in 1976 and 1977 and were back into the mid 80’s in wins by the late 70’s. Detroit became one of the better teams in the eighties, winning a World Series title in 1984.

The Yankees are having their worst start after 22 games since 1991. Since 1994 the lowest amount of wins the Yanks have had in a season is 84, an incredible run of success. That said, the Yanks haven’t had a top-10 pick in the June draft in 23 years — since Derek Jeter in 1992.

CC Sabathia Is Like John Wayne in True Grit