By most everyone’s account it was a successful 2016 Yankee campaign, even though they didn’t make the playoffs. They “sold” in August and still threatened til the final week — were 1 game back of the wildcard until a 2-9 swoon in late September, but still won 84 games — their 24th consecutive winning season.

And now they have the benefit of selling — a ‘stocked’ minor league system with some top echelon youngsters from the Chicago, Cleveland, and Texas organization, and their own budding stars — like Gary Sanchez, Tyler Austin, and Aaron Judge — who came up and provided a breath of fresh air this year. Not to mention Greg Bird who looked great as a rookie last year before missing 2016 with an injury. Go get a free agent to add some spice like Yoenis Cespedes and the next Yankee dynasty is ready to roll — prevailing sentiment amongst some Yankee fans.

Not so fast. There are a lot of ‘issues’ facing Brian Cashman this winter.

Right Field: Aaron Judge is being mentioned behind Tyler Austin‘s name now by many Yankee fans for a reason. After a monster homerun in his first Major League at bat, he was horrible — striking out at legendary pace — once every two times up. 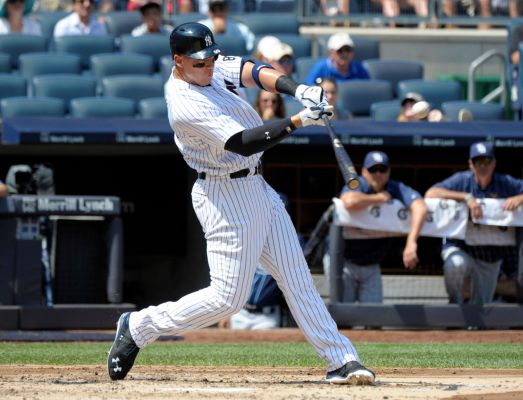 Yankee fans chastised Yankee management all summer for keeping Judge down so long — long enough to lead the AAA International League in homeruns (with 19) when he was promoted. Yankee management knew what they were doing — nursing Judge as long as they could on AAA pitching so he could gain confidence and learn to hit the curveball, as they knew he’d see a steady diet of Major League curveballs once he came up. Judge has the capability to be AWESOME. He hits rocket shots. He is a terrific Defensive outfielder which is icing on the cake. But the Yanks can’t go into 2017 with Judge penciled in as their starting right fielder because he could drown.

Tyler Austin could press Judge for right field — and Austin looks much more ready for prime time, with opposite field homerun power and an ability to hit for average and get on base. The Yankees also have Rob Refsnyder as backup plan for right field — Ref showed he could hit major league pitching (might be a .270 to .300 hitter or more someday) but zero homeruns in 150 at bats means he can’t be penciled in as a starter for next year either. He did hit 14 homers in AA.

Some (including John Sterling and Suzyn Waldman the Yankee radio announcers) have suggested the Yankees go get Cespedis (a free agent) for right field. But that would mean Judge doesn’t play. The difficult part of any youth movement is allowing young players with tremendous potential to learn, during the course of which they will fail a lot, so they can learn to become good. Do Yankee fans have the patience of playing Judge everyday next year to a .220 batting average or worse with over 200 strikeouts?

Left Field: Brett Gardner was ‘ok’ as a lead off batter. He makes $11 million a year and he doesn’t seem to have a whole lot of Yankee fans on twitter. Still, deceptively, he had a .351 On Base Percentage this year — his second highest OBP of his career. He stole 16 bases and was only caught 4 times. And he played phenomenal defense in left field.

Some project Mason Williams to press or replace Gardner for left field next year. Terrific — as long as Mason Williams, or any other youngster the Yanks bring up, can match that .351 OBP, steal 16 bases and play a phenomenal left field. Maybe left field will eventually be owned by Clint Frazier, who has been a 15 homer, .285 avg, .350+ OBP hitter in the minors at each stop so far. Frazier only batted .228 with 3 homers in 101 at bats at AAA Scranton/Wilkes Barre after the Yankees acquired him in August for Andrew Miller.

C: Gary Sanchez is the catcher and that’s that. Austin Romine looked really good this year as a backup. Brian McCann ended the year as the DH. He has power (20 homers) and hit .242 with a pretty good OBP of .334. He clearly has value as a starting catcher, but makes $17 million a year with three years left on his contract. Hard to trade unless the Yankees eat some of that contract.

1B: Greg Bird. Looked good last year as a rookie. Will be pressed by Tyler Austin, if Austin isn’t pressing Judge or whomever in right.

2B: Starlin Castro. 21-70-.270, with a .300 OBP this year and pretty decent defense — excellent at turning the DP.  He’s 26 yrs old will be 27 next year. Brian Cashman has done a nice job at injecting youth and some defense to the Yankees middle. But that .300 OBP is not good. And Castro can make some mental errors on the basepaths.

SS: Didi Gregorius. 20-70-.276, with a .304 OBP and terrific defense at shortstop. 26 years old will be 27 next year. Almost identical offensive numbers to Castro. And so yes, his OBP is poor, like Castro’s. If he can raise the OBP the world is his oyster; a budding star.

3B: Chase Headley. 14-51-.251, .329 OBP, after a horrific April, where he was batting .150 with no extra base hits. His defense was solid — the throwing problems he had in 2015 were put in the past. He can make the spectacular play — like turning a double down the line into a game-ending double play to win a game in early September. He can work the walk — his OBP was in the top 40 in the American League. And there aren’t too many better defensive third basemen at the ‘hot corner’. He’s a switch hitter, always a plus. Overall — a good defensive but mediocre offensive third baseman. 32 years old, 33 next year with 2 years left on his contract.

DH: All the AL playoff teams have a monster DH (David Ortiz w Boston; Carlos Santana w Cleveland; Edwin Encarnacion w Toronto; Carlos Beltran — and before that Prince Fielder w Texas; Mark Trumbo w Baltimore) — all were 30-homer, .350 or higher OBP, and high OPS (On-base+Slugging Pct) guys. The Yanks have McCann, whose value is really as a catcher. They have an obvious need for a big bopper here, to plant in middle of lineup in between Gary Sanchez (#3 hitter) and Greg Bird, Aaron Judge/Tyler Austin (#5 & #6).

The Lineup: Looking at the team another way, the lineup shakes out as this for 2017:

Yanks cry out for a big-bopper DH; a 30-homer, .350 or higher OBP, high OPS who they can put in middle of lineup. And hope the youngsters do well.

Next Up: The Pitching Staff

Cano, Castro and the “Domino” of 2nd Basemen Trades