Once upon a time a long time ago there was a pitcher named Jim Palmer who was one of the elite pitchers in the American League, the ace of the Baltimore Orioles.  Future Hall of Famer. If you got to Jim Palmer — you got to him early. In the first few innings of a game, I had seen the Yankees almost get him — a bad inning — a few hits, some walks, bases loaded, a run in — the Yanks were about to knock him out. And then.. they didn’t. He’d find his composure. He’d wiggle out of it. He’d only allow a run or two. And then they were done. He’d find his groove and mow them down the rest of the game. 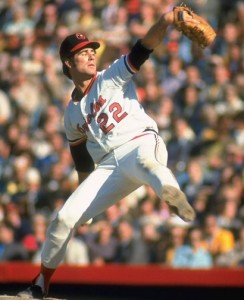 Masahiro Tanaka proved yesterday he is a lot like Jim Palmer. He has ‘ace’ stuff, and if you don’t get to him during any early-inning hickup, he will mow you down.

Tanaka was cruising through the first 4 innings, and the Yanks had a 1-0 lead off an early Carlos Beltran homer — a battle for 1st place — Yanks entering  with .5 game lead. Then Tanaka lost it. He walked Ryan Goins, allowed a bloop single to Ben Revere, and then threw 4 straight balls to Troy Tulowitzki. Bases loaded nobody out, and here comes Josh Donaldson, Jose Bautista (who follows us on twitter), and Edwin Encarnacion — the heart of the order.

As a Yankee fan, listening on the radio — it was over. It was just a matter of how many runs Tanaka would give up. He couldn’t throw a strike. John Sterling, Suzyn Waldman, and a reporter from one of the local papers visiting the booth were talking about how Tanaka’s pitches didn’t have the velocity they had before the injury last year. He was working slower in difficult jams now. He was reinventing himself, figuring how to pitch with the velocity gone. I was thinking — Joe Girardi has to take him out — now — before the avalanche. Why let Toronto score 3 or 4 runs before removing him, he obviously has completely lost it. What a difficult position to be in as a manager. How long do you wait? 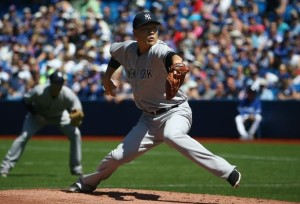 Ok he got an out. Now the mind turns over and says, maybe he can get a ground ball? Even then, you know he’ll get killed next inning.

Tanaka struck out Bautista. Two out. The talk on the radio switched — if Tanaka can get another out he’d have done well to only allow one run. Then — a little blooper behind second … a pregnant pause as Sterling called it like it might drop in for a hit and disaster — but no — Stephen Drew makes the catch! I love Stephen Drew and his defense. Ran in to watch the play on tv and it wasn’t a spectacular catch; normal catch behind second base. Still — phew. 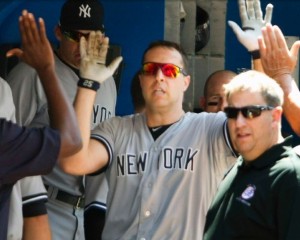 And that was it for the Blue Jays. Tanaka became Jim Palmer. Mowed them down for the rest of the game. The Yankee offense chipped away at Marco Estrada — Mark Teixeira hit a homerun in the 6th, then in the 8th got an insurance run off LaTroy Hawkins from the Beltran-Teixeira combo — a double by Beltran and a single by Teixeira to score pinchrunner Chris Young. In the 9th Jacoby Ellsbury singled in Ryan Murphy who had doubled off Aaron Loup. 4-1 Yanks.

Tanaka was in total command, mowing down the Jays, pitching a complete game victory for the Yanks, who remain in first, 1.5 games up now. Tanaka is now 9-5 3.56. 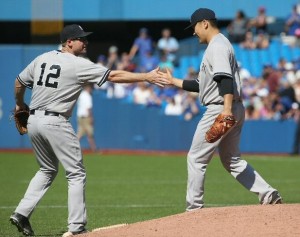 Jim Palmer led the American League in complete games in 1977, at the height of his career. Tanaka, according to Waldman, feels he hasn’t done his job if he doesn’t pitch a complete game victory.

“They ran into a buzz saw today” said Toronto TV analyst Gregg Zaun visiting the Steve Somers show after the game on radio. ‘They’ being Toronto lineup. ‘Buzz Saw’ = Tanaka. Zaun, a former catcher, then went on for 45 seconds delineating what pitches Tanaka used and how he threw them to buzz saw the Blue Jays. It was an impressive list I couldn’t write it down fast enough and there is no rewind on radio.

Author’s Note: There is a mixed metaphor in this article which I am not correcting on purpose. I feel Tanaka ‘mowed them down’. However, Zaun used the Buzz Saw metaphor and that rhymes with Blue Jays, as in “buzz saws Blue Jay’s. So I’m leaving them both.