Best regular-season Yankee win in 5 years, maybe 10. Not since Jeter dove into the stands against the Bosox or the Mets 2nd-baseman dropped the popup has a Yankee regular season game been this intense, with so much on the line.

Toronto riding the 11-game winning streak, having swept the Yanks last weekend in the Bronx, with hundreds of Toronto fans at the Stadium — a big group in left field doing roll call for their players in the ninth. The Yankees with a 5-game losing streak — having lost their 6-game lead in a week and now trailing Toronto by a half a game.

And David Price vs Ivan Nova — again — second time in a week — last weekend at the Stadium, Price was unhittable on a sunny Saturday in the Bronx — Cowboy Hat day — and Ivan Nova — pitching a shutout thru 5 then lost it suddenly in the 6th — walk/hit/walk/grandslam.

Now the rematch. Price not as on his game — Yanks getting hit after hit — but no runs. Nova pitching well but then getting hit in the 3rd for 3 runs. A long night ahead. This would push the Yanks to 1.5 games back. Toronto would win their 12th straight, sending the Yanks further into their tailspin.

Then Nova settled down. In the 4th, 5th, 6th, 7th, he kept the Blue Jays at bay — hardly any hits. You turned around in the 7th and the Yanks were outhitting the Jays 10-5 — but still NO RUNS. Price kept escaping. David Cone on tv was saying, “Sometimes you need your pitcher to win a game w a shutout. Sometimes a quality start doesn’t get it done”, and his co-analyst in the booth was reminiscing that Cone had pitched a couple of big shutouts down the stretch for the Yanks in 1996 after they had picked him up from Toronto, ironically. 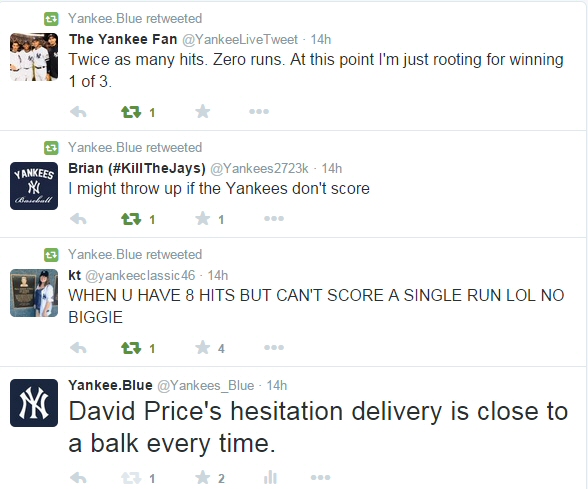 Toronto put runners on 1st and 2nd in the 7th; Nova may have been tire-ing. The final Toronto seemed to come on a grounder to Headley at 3rd, who grabbed the grounder just fair and stepped on 3rd for the final out. But the ump ruled it foul so the inning continued. The batter then grounded to Didi Gregarious (who is playing great in the field and at bat) at shortstop.

Gonzalo VH (@GonVH) came in with the hopeful tweet of the day: “Things will even out #Yankees. Fear not.” 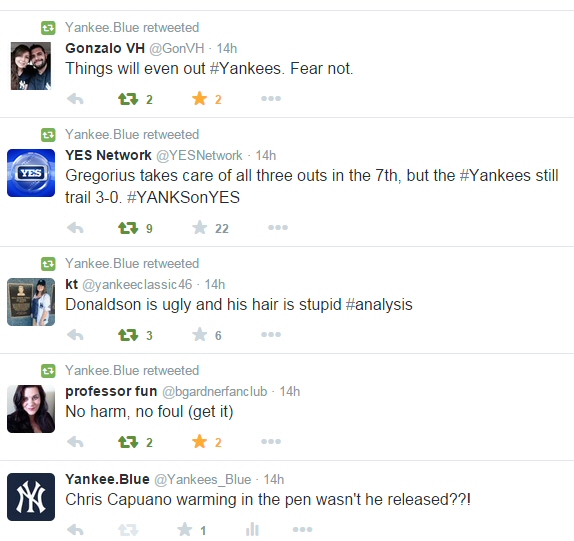 The 8th began and it was dismal. Chris Capuano was spotted — still on the team (he had been released a week earlier but apparently reassigned to AAA then brought back up) — warming in the pen.

Alex Rodriguez led off the eighth with a flyout. Then Mark Teixeira singled. Brian McCann singled to left center and a sparkle of hope was revived. Chase Headley bammed a shot to left center — bounced over the wall for a ground rule double it would have been two runs had it stayed in; but now 2nd and 3rd and Price was gone. In came Aaron Sanchez, throwing 98-mph HEAT. Carlos Beltran pinch hit. First pitch SWING and a MISS. Second pitch — more high heat — SWING and a Miss. Then a ball. Then came a Belt high fastball — BAM — right center — going, going LONG GONE. HOME RUN. Beltran belted a belt-high fastball for a 4-3 Yankee lead!!!!!!!!!!!!!!!!!!!!!

Didi singled but was erased on a Brendan Ryan doubleplay to end the Yanks 8th — hardly anyone noticed as we were all celebrating and tweeting. In the 8th Dellin Bettances struck out Jose Bautista (who follows us on twitter), got Edwin Encarnación to fly out tepidly, but then Justin Smoak SMOKED one to right center — looked GONE for a tie game — but was caught DEEP by the warning track by Jacoby Ellsbury.

Miller for the 9th

To the 9th. Andrew Miller on the mound. He got Russell Martin to fly out easily to left. Then struck out Chris Colabello on a 2-2 pitch — a fastball right over the plate. Ump called it a ball slightly outside and so it was 3-2; Miller got ROBBED. Would have been two out no one one but then a ball on 3-2 put a runner on first. Kevin Pillar hit an easy ground ball up the middle — would have been a double play but went thru 10 feet from Didi and it was two on. A wild pitch made it 2nd and 3rd — tieing run on 3rd, winning run on second. Yanks looked DOOMED.

Miller got tougher. Struck out the dangerous, slap-hitting, put-the-ball-in-play Ben Revere (batting .290) with a filthy slider in the dirt. Then came the ultimate battle — Miller vs Troy Tulowitzki with everything on the line.

An epic 12 pitch at bat. The count went 3-2. Tulowitzki fouling off slider after slider. A hit and the Blue Jays win and move to 1.5 up with 12 in a row. An out and the Yanks take over first. CRAZY TENSION. Baseball has this way of winding up the pressure and winding it up and winding it up; hits a crescendo. The cameras kept panning to David Price, watching from the sidelines, and Joe Girardi. Yankee fans on twitter were having breakdowns.

And ps if you have not watched a Yankee game following at the same time a ton of Yankee fans on twitter you do not know what you’re missing. It is FUN FUN FUN to read what other people are thinking and feeling, and contributing yourself. This is where Twitter really shines and it goes for every team not just the Yankees. Here is a snapshot of some of our tweets and retweets during the game last night. 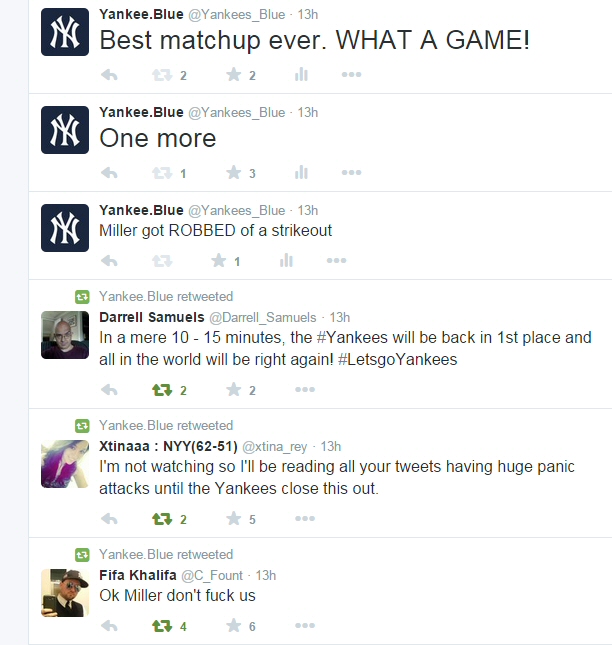