Today’s Yankee game at the Stadium — Toronto 6 NY 0. A terrible loss. Not only did Yanks get beat, but there were more fans of the ‘other team’ than I’ve ever seen at Yankee Stadium. There were hundreds — maybe in the low thousands? — of Blue Jay fans at the Stadium — rooting on the Blue Jays as they crushed the Yankees.

Worse yet, in the 9th inning, there was a solid group of 30 or 40 fans in the left field bleachers that went into a roll call for their Toronto players on the field — mocking the Bleacher Creatures — IN YANKEE STADIUM!

The score was 0-0 in the 6th — a pitchers duel between David Price and Ivan Nova. Price looked like he was going to pitch a no hitter, until Alex Rodriguez opened the 4th with a single. Carlos Beltran singled with 2 out — that was the afternoon’s only Yankee rally. Didi Gregarious was the only other Yankee with a hit; Girardi opted to start Chris Young in left to face the lefty Price, over Brett Gardner who got the day off (pinch hit in 9th). All the other Yankees — Mark Teixeira, Jacoby Ellsbury, Brian McCann, Chase Headley, and Brendan Ryan (playing 2nd over lefty swinging Stephen Drew) were hitless.

Meanwhile, Nova was cruising, and in the sixth he got the first out, but then walked Josh Donaldson, allowed a single to Jose Bautista, and then walked Edwin Encarnacion to load the bases. Joe Girardi left him in for one more batter, hoping for a ground ball double play — but that batter Justin Smoak — hit a grand slam. Just like that the game was over.

David Price continued his brilliance and the Toronto fans started to perk up — cheering their guys on, from all over the stadium — including the guy in front of us who was quite obnoxious his Yankee-fan wife kept telling him to chill out. 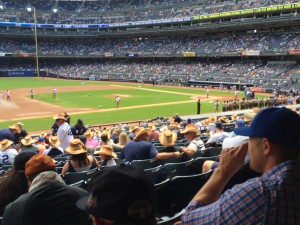 The ninth inning is when the humiliation hit is epoch. The group of Toronto fans in left field doing a roll call for their players; Toronto fans holding up signs for their team. All in Yankee Stadium.

How Come So Many Toronto Fans?

As we left the stadium, it was incredible how many Toronto fans there were outside walking amongst Yankee fans — hundreds — there was a Toronto fan in front of you behind you, a cluster to your right, a whole bunch coming out of the stadium to your left. I asked a Toronto fan how come so many fans? Was it an organized event? He said that a lot of fans were getting into the Jays this summer because its been 20 years since they were good and there’s pent-up demand. He and his friends had come to NYC on a visit for another matter, but a lot of the fans there came through organized bus trips. I told him thanks; wished him good luck. He thanked me for the hospitality. Friendly guy. People are people, you know?

You have to wonder if these organized trips were abetted by Yankee management, looking to fill the seats at Yankee Stadium? How does a group of 30-40 fans get a whole section of seats together in left field? A quick lookup on the internet shows these bus trips are popular — sold out. 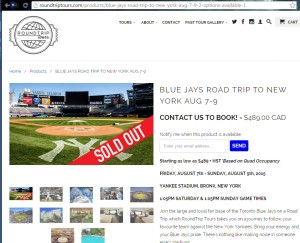 Good News for the Yankees

The good news for Yankee fans — Nova pitched well; nobody got hurt (Yankee players — I suppose a worse loss would be if a key player blew out his arm; that’s about the only way a loss could be worse than this), and the Yanks are still in first.

And the other good thing about the game was of course the Cowboy Hat, and the gorgeous weather — 80 degrees and dry/low humidity with a nice breeze; perfect day. The first 22,000 fans or so got the hat. It is a nicely made straw hat; looks real good on; very comfortable to wear, and inside it says made of 100% paper — although this is certainly not a paper hat — it feels like a soft straw hat. 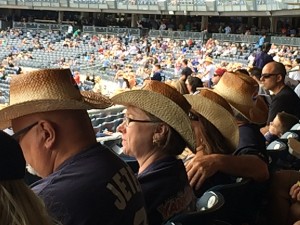 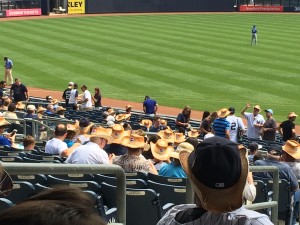 The Yankees now desperately need to win today’s Sunday matchup to not get swept, hold off the Blue Jay charge and push them back to 3.5 back. They’ll face Blue Jay Marco Estrada a tough righty who is 9-6 3.44. For the Yankees, Masahiro Tanaka goes, 8-4 3.84.