Once upon a time (2003 or so) I wrote an article on why Graig Nettles should be in the Hall of Fame — but titled it “Why Bobby Murcer Should Be in the Hall of Fame (I Mean Graig Nettles)” since Murcer was the straw that stirred the Yankees’ early 70’s drink. I would get daily traffic to this article of 5 or 10 hits a day. Sometimes I’d google search “Bobby Murcer” and be happy to find that my article was placed #3 or #4 at the top of the search findings.

One day, I did the google search and saw a search return that BobbyMurcer.com was available — it was an automated report on one of those websites that reports expiring urls. I had checked the BobbyMurcer.com website years earlier and some nefarious company was using it as a traffic generator. So I jumped on the url and bought it — and built a fan website on it — with info on Murcer, pictures, books, his baseball cards, etc. But on the home page I stated in bold letters — “This is a fan site for Bobby Murcer. If Bobby Murcer would like to take ownership of this url, we will give it to him for free.”

About a year or so later — I received this email: 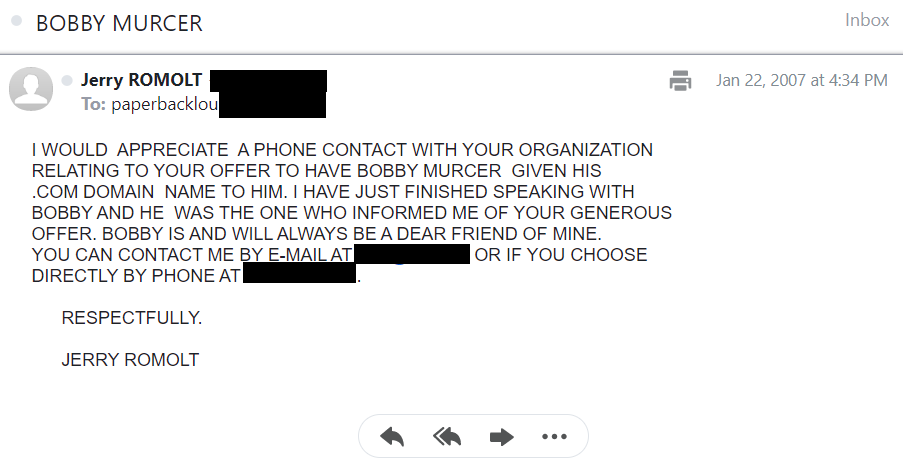 The first thought that came to my mind was if this was legit or not. I’d not heard of Jerry Romolt. But it seemed legit. A google search showed he was a Major League Baseball agent.

And then came the phone calls. Jerry gave me a call, and two calls, and three calls, in a day — he is a talker; an older fellow with a gravely voice. He told me of his long-time friendship with Murcer, and arranged a phone call with Murcer. As an aside he told me a few stories as to what a terrific guy Murcer was.

Phone Calls with Bobby and His Wife Kay

Next was an introductory call with Jerry and Bobby. It was amazing to be talking to my childhood idol, Bobby Murcer, on the phone. We arranged to have a follow-up call where I’d transfer the url to Bobby.

That came a few days later; I found myself on the phone with Bobby Murcer, walking him through details on what buttons to push to transfer the url to his domain server website, with his wife Kay in the background offering support. What a trip.

It was like trying to tell my father-in-law how to use the internet. Bobby was not expert at this field — this was 2007 remember and the internet was only 9 years old, for all practical purposes. And he and Kay explained they had been having some internet connectivity issues from their Oklahoma home.

We resolved to have me contact his son-in-law to get the details of the transfer done. Which we did in within the next two weeks.

Bobby had just beaten brain cancer. There was an outpouring of support for him, some directed at the feedback form on bobbymurcer.com starting that January, 2007 — two weeks before Jerry Romolt contacted me. I forwarded the feedback to Murcer until the transfer took place.

A year later it was reported that doctors saw a shadow in the place where they had done surgery on Murcer’s brain, and decided to investigate to be sure. The shadow proved to be just scar tissue; but the second surgery proved fatal, and Bobby passed away on July 12, 2008. Horrific.

The family, no doubt devastated, let the url expire, and a nefarious company bought it to use as a traffic generator again. This went on for 7 or 8 years. Yesterday, in deciding to write this article, I checked — and the url is available again. Murcer is long gone, the family doesn’t want the url, and I don’t need to spend $200 over the next 10 years to maintain this url ($11 original purchase but it’s $20/yr maintenance), but I bought it anyway — to keep it away from the nefarious and complete the circle.

At one point Bobby sent me an email to thank me for getting him back his url. One of the great thank you’s I’ve ever received. (Bobby also thanked me on the phone and offered, as I recall, to meet me at Yankee Stadium, which I told him wasn’t necessary). Thank YOU Bobby for all the fun times watching you excel with the Yankees in the early and late 70’s, and many years of enjoyable analysis on YES Network with your Oklahoma drawl. You are missed.