Willie Randolph was my favorite player growing up. I became a Yankee fan at age 11 in 1973 and by 1975 had already suffered through Horace Clarke and then Sandy Alomar — who wasn’t bad but was inconsistent and on the back-end of his career. My favorite pitcher was Doc Medich, who won 19 games for the band-on-the-run team of 1974, fell to 16 wins in the disappointing 1975 season, and then came news of the trade.

Doc for Dock, and Willie “Rudolph”

Doc Medich for Dock Ellis (who was older and at that point with not as much upside as Medich), Ken Brett (who was a reclamation project), and a young potential all-star second baseman — Willie Rudolph. Rudolph is how half the pre-season magazines spelled Randolph’s name. And in 1975 pre-season magazines were how you got your news — they were Everything for a baseball fan — with no internet or sports center. 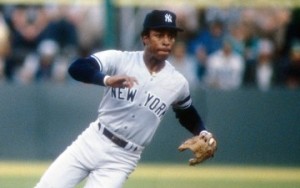 So I was excited — as much as I hated to see Medich go — he came up thru the system and was a Yankee through-and-through —  here was a young second baseman who was supposed to be a great fielder, good hitter, and could run with the wind. The Yanks were an older, slower team in a game that was all about stealing bases in the mid seventies.

Willie Was an All Star

Willie did not disappoint — he could pick it at second. He could steal bases. And he could hit. One of the best hitting second basemen in the American League — a .270 avg with 5 homer power was as good as it got for a middle infielder in the dead-ball seventies. (Which, by the way, when the Yanks later traded for Bucky Dent, they were getting one of the best hitting and fielding shortstops in the American League; that fact has been obscured by those remembering the famous Dent homerun vs Boston.)

Willie became a guy who made the All Star team for the Yanks. I used to swing a sledgehammer in the backyard to improve my swing strength, pretending I was Willie Randolph. I was also 5’11 and about 150 pounds at the time so I likened myself to him.

He had a down year in 1981 due to injury, and then some drudge was established in the newspapers in the early eighties that insinuated Randolph didn’t play hurt. If he got injured, he’d be out. I continued to root toot toot for Randolph, hoping he’d amass numbers to solidify his place as the all-time greatest Yankee second baseman.

Willie to the LA Dodgers; Steve Sax to NY

He had some fine seasons for the Yanks in the early to mid eighties and then at age 35 they let him go — signing Steve Sax instead and letting Randolph walk as a free agent to the Los Angeles Dodgers. Sax was 29; Randolph was 34 and coming off a bad year so it made sense. Still I rooted for Willie when he was with LA — and was stoked when he had the comeback all-star season there — and then he had that nice late-career year with Milwaukee. Sax was good but by his third or so year in NY he developed a mental issue where he couldn’t throw to 1st base anymore without throwing the ball away. I wished the Yanks still had Randolph. Actually — I wished they could make a trade to go get another young Willie Randolph from somewhere.

When he retired with the Mets, and became a Yankee coach — was good to see him back. For years he wanted to become a manager, but having followed him as a player — I had always read in the newspapers that he was a quiet guy, and not a natural leader in the clubhouse. So he seemed an unlikely manager choice.

He got his spot with the Mets and seemed a decent manager for several years there. When Willie made his acceptance speech at Old Timer’s Game at Yankee Stadium yesterday — I was blown away at what a good public speaker he was. He spoke from the heart and at length, thanking everyone. A terrific speech — not one that would be made by a ‘quiet guy’ or introvert. 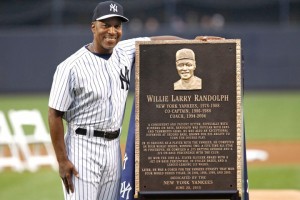 Since Willie retired, Robinson Cano came along to claim the spot of greatest Yankee 2nd baseman ever. Willie is probably second — second best 2nd baseman in Yankee history. Not a Hall of Famer but certainly a guy who deserves a plaque in Monument Park. Now — where is Graig Nettles‘ plaque?