Very rarely does a baseball team come up with 3 great starting pitchers via their farm system during any one short period of time. The home-grown pitching staffs of the Baltimore Orioles of the 70’s, the Oakland A’s of the early 70’s and early 80’s, the NY Mets of the 80’s, and the Atlanta Braves of the 90’s are rare instances that come to mind — but if you looked hard at those examples, you’d find the home-grown talent was aided by guys who came in via trades.

So now with Manny Banuelos traded to the Atlanta Braves for David Carpenter and Chasen Shreve — the Yankees are left with one Bee — and a pretty good one at that in new ace reliever Dellin Betances. According to his wikipedia entry at current writing, Adam Brackman is an American former professional baseball pitcher.  Brackman blew out his arm.  His comeback ended in 2013 when, according to a report he quit baseball to pursue a basketball career overseas. Brackman was 6’11” tall. 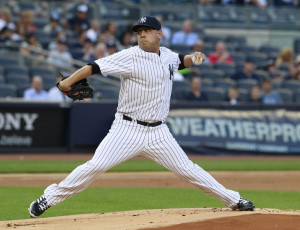 Manny Banuelos — Editor’s note: as has been noted by Shawn Miles & Highlander 64 in comments, this is actually Vidal Nuno

Most interesting from the Yankee perspective may be the other guy the Yanks got in the Banuelos trade — Chasen Shreve, a 24-year-old lefty reliever. He made his major league debut in July 2014 and pitched 15 games, 12 innings, 10 hits allowed, 15 strikeouts and had a 0.73 era. His minor league scouting report is interesting. Yanks already have two lefties in the ballpen in Andrew Miller and Justin Wilson. But you never have enough pitching. Maybe one of them will be pressed into the starting rotation where the Yanks only have lefties Sabathia (if he stays healthy) and Chris Capuano.