The 2018 season will be judged a disappointment if the Yankees don’t make it to the World Series. They could’ve/should’ve won it all last year — if Greg Bird were a bit faster, or if they had traded for Justin Verlander instead of Sonny Gray. We predicted 90 wins and a wildcard berth before last season’s start and we were on the money — let’s see if we can do it again.

Prediction: Yankees will win 98 games and the division title, and they will make it to the World Series.

Yankees come off an off-season where Derek Jeter and Miami twisted their arm to take Giancarlo Stanton, the NL MVP and home run champ and 6’7 monster. This was equivalent of the Golden State Warriors signing Kevin Durant — it turned the Yankees from fresh, young upstart team built mostly from the farm system that even other fans in other towns were rooting for, to the big, bad, evil-empire Yankees that everyone hates. In one move. Had the Yankees signed a high-priced free agent starting pitcher, they would have flown under the radar more, and be more liked — and it probably would have been better for their team.

Still here they are — will be a fun team to watch with monster lineup featuring Aaron Judge, Stanton, Gary Sanchez, and Didi Gregorius. And tough end-of-lineup hitters Neil Walker and Brandon Drury. And maybe a guy named Greg Bird. 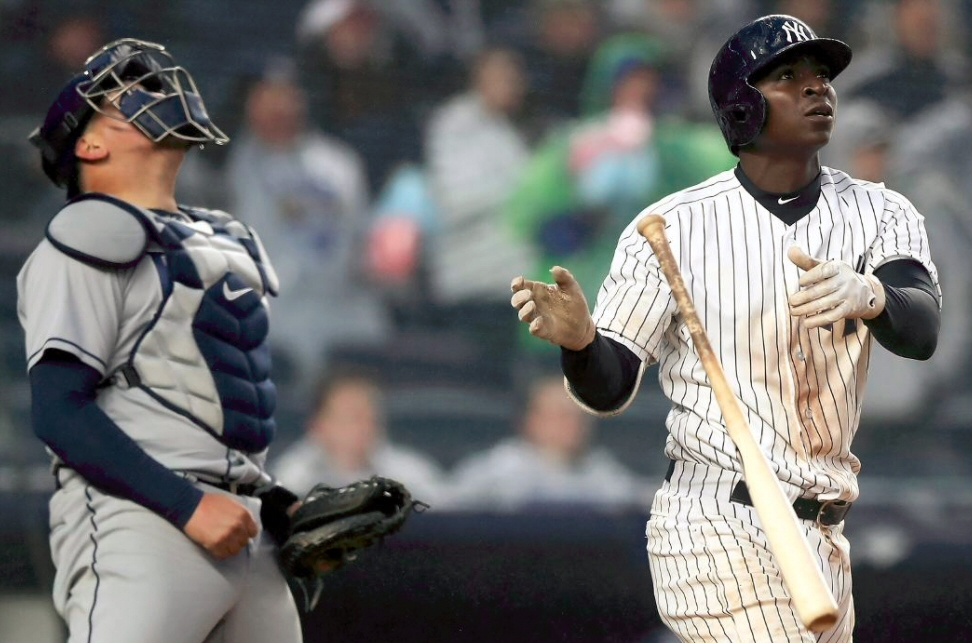 Drury seems to be a slick fielding, good hitting 3rd baseman that got Arizona 15-.270 his first two seasons. He’s only 25. His fielding seems surer than Chase Headley, and his bat just as good if not better. Drury’s hitting is better, batting average wise, than Todd Frazier. Drury’s fielding is better than rookie Miguel Andujar. So here we were as Yankee fans waiting for Andujar and his hot bat, not talking much about his defense, and asking for Frazier back — and the Yankees turned 180 degrees and got Drury — possibly their 3rd baseman of the future. Because 3rd base is a DEFENSIVE position where you’d like to get some good offense, and the Yankees know that.

Same could be said for 2nd base, where we as Yankee fans are waiting for the hot bat of Gleyber Torres, but we don’t know what kind of defensive second baseman he’ll be. The Yankees went out and signed slick-fielding, good hitting Neil Walker to a one-year, $4-million/year contract. He was making $17 million/yr for the Mets. Terrific move by the Yankees to sure up the middle-of-the-infield Defense for a championship-run season. And if Gleyber can break in — fine. But he’ll have to be good enough defensively.

Greg Bird is injured again. Never seen so much expected of a guy who has proven so little. Nice swing. Good defense. Hit well in playoffs last year. Injured again. We don’t know what he can do over a full season — will he bat .180? .220? .278? .320? The Yankees have put Tyler Austin at 1st the first week of the season, so they still have confidence in Bird.

Looks good. Great D in left. Hicks in center — injured again this first week of the season but the word is he’ll be back soon. Jacoby Ellsbury is expected to ride the pine which is why the Yankees can be so good and the Knicks struggle (no salary cap in the MLB; Yanks can eat contracts). Judge is terrific defensively.

Sanchez will have to prove that he can take a step up this year defensively, in not allowing passed balls. At times last year he was horrid.

Looks like it could be phenomenal again. All eyes will be on Dellin Betances — to see if he can control his wildness that gets initiated when runners steal on him as soon as they get on, and he adjusts his motion, then getting out of wack. David Robertson is there as the other setup man to Aaroldis Chapman. And then also Chad Green and Adam Warren. Wow, wow, wow quadruple wow. Excellent reliever Tommy Kahnle becomes an after thought!

Joe Girardi was a Great manager. And took the Yankees to the pennant playoffs. And was laid off and replaced with a guy, Aaron Boone, who has never managed in his life at any level. And so the Yankees look good so far — a good spring training and 4-2 to start the year — proving that a manager is worth about 7 percent of a major league baseball team’s success — vs say 65 % in the NBA, and a higher percentage in the NFL.

Look out for the 2018 New York Yankees. Baring injuries, this Yankee team seems headed to a 98-win season and is constructed to go deep into the playoffs. And be super exciting to watch.