Going into the final game of the season, the Yankees are 91-70 and are the #1 wildcard but were officially eliminated from winning the division title yesterday when the Red Sox beat the Astros.

While we twiddle away the hours awaiting Tuesday’s wildcard game against Minnesota at Yankee Stadium, with Luis Severino starting, all talk turns to the MVP race where it is Jose Altuve of Houston vs Aaron Judge.

Judge’s horrific 1.5-month slump that lasted from middle of July thru August, badly hurt his MVP chances — but a super strong September may have put him in the lead again. Most non-NY media are saying it will be Altuve. Current stats heading into the final game of the year: 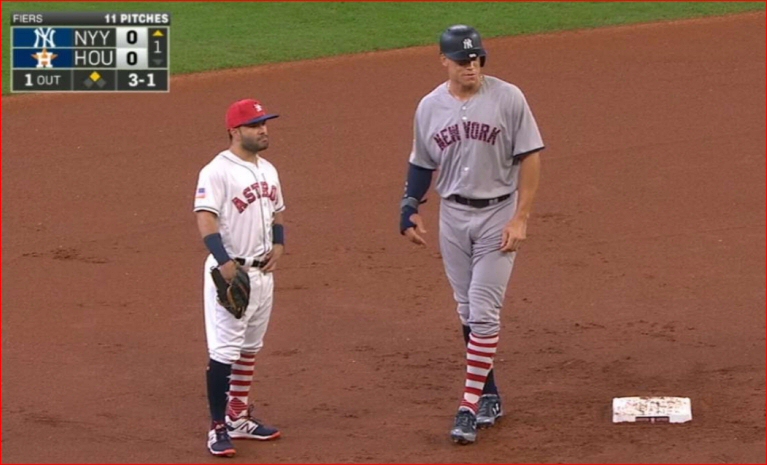 Mike Trout‘s recent return from a month-and-a-half injury may have hurt Judge’s chances for MVP. As of a week ago, Judge led the American League in Homeruns, OBP, Slugging, OPS, Runs, and walks.

With an amazing 52 homers as a rookie — many of them titanic shots — it would be hard not to give a guy who led the league in so many major offensive categories the MVP. All Altuve has is the batting avg lead.

However, Trout recently reemerged on the leader board as he now has just enough at bats to qualify — and took over the lead in OBP, SLG, and OPS. Of course those numbers might have fallen if Trout had played more — as batting averages and ensuent OBP are harder to keep high the more at bats you get.

If Judge can capture the lead in Slugging, maybe it’s that final straw that can swing the MVP his way. We’ll see.

PS: Judge is not expected to play the final game as Joe Girardi wants to give him a day of rest before the playoffs.