It took 40 years but baseball cards, etc are back in vogue again. All the cards from the mid to late 80’s during the last bubble are not worth much — but stuff earlier and later is selling like “hot cakes”, or “baseball cards were in the 80s”.

Our daughter is going thru my cards and figuring which to sell. I’ve instructed her to sell, sell, sell before the bubble bursts. She has done a good job selling records on ebay, amongst other things. She’s on spring break from Podiatry school.

But the Joe Montana rookie we’re going to have graded. It looks like an 8 or 9 which would make it worth a few thousand. Who would buy it I don’t know. I got the 1981 Football set with Montana in it by mistake. In 1981 I ordered several Bobby Murcer cards from the late 60’s for a total of $2.50 from Renata Galasso — the only card dealer of the day — they used to advertise in Baseball Digest if you recall. Galasso sent me that year’s football set instead by mistake.

When we were living on 72nd Street in Brooklyn in the 80’s, I visited Renata Galasso — which of all places was located on 63rd Street and 10th Avenue, a few blocks from where I lived as a kid (5908 Fort Hamilton Parkway) before moving to Staten Island. 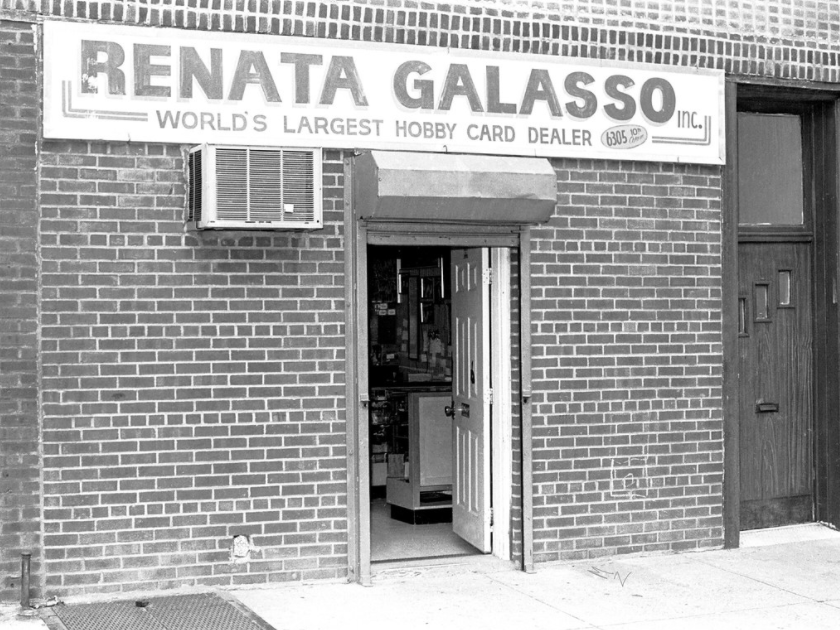 There was an old, gruff Italian guy behind the counter with a bunch of teenagers working there. I figured he was Renata Galasso. I used to stop in from time to time in the late 80’s. There was also a fairly attractive woman in her 40’s there on occasion. She was very pleasant. I figured it was his daughter, helping out.

I found out years later SHE was Renata Galasso.

Or at least I thought that for a while after finding the picture that highlights this article on line.

But then.. I found the original picture — and from that — found out it is probably Renata Galasso’s aunt.

The original picture is by Bearden — who on his Flickr account says he took the picture for the NYU student newspaper, the Washington Square News. He states he took the pictures “on assignment for an NYU student newspaper article about the lady behind the trading cards. I remember her wanting to continue working while the reporter I was with interviewed her. I had no choice but to just start shooting! She was all business.”

However, a person named Valerie responded to the pictures that “I actually worked here during my high school and college years… The woman in the picture is not Renata — that is her aunt. Thank you so much, though, for a nice trip down memory lane! :).”

Renata Galasso has a wikipedia entry. According to the current entry, created by Waynem37, Galasso began her business in the early 1970s as a way to pay for college. “She purchased individual packs of cards—primarily Topps—and built sets for sale, which was unusual for that time. (The first verifiable complete sets sold were in the 1974 J.C. Penney catalog.)”

More according to Wikipedia: “Galasso eventually opened a shop around 1975 on Bay Ridge Parkway and later relocated to 6305 10th Avenue in Brooklyn, New York. At one point, Galasso claimed in her catalogs and shipping labels to be the “World’s Largest Hobby Card Dealer.” Galasso printed some cards in partnerships with Topps and The Card Memorabilia Associates, Ltd. (TCMA) and eventually printed some independent card sets as well.”

The information on Wikipedia by Waynem37,  would corroborate the fact that the picture above is probably of Renata Galasso’s aunt — if Renata was going to college in the early 70’s she’d probably be early to mid 30’s in 1986 and the woman in the picture looks to be in her 40’s. The Wikipedia entry also lists Renata’s birthdate as May 11, 1955; that would make her 31 in 1986. Not sure where that information comes from.

In any case, Renata Galasso should be in the Hall of Fame. She was a pioneer. Ahead of her time by orders of magnitude. A woman-owned businesses. A woman into baseball cards. An entrepreneur. The ONLY online baseball card dealer in the 70’s, advertising in Baseball Digest when nobody else was. Absolutely amazing. You talk about Women’s History Month..

Where is Renata Today?

Renata Galasso must have gone out of business at some point during the lean years for baseball cards after the boom, bubble, and bust of the mid to late 80’s/ early 90’s. There is amazingly little information about her or the business online.

I tracked down a thread on a baseball card forum from 2004, wherein someone said “I tried to track her down a couple of years ago, I went to the old address and it was a candy/cigarette distributor run by a good fellow named Mikey….I asked if they left any cards behind and they didn’t. He had some cards that HE had leftover from his business. He gave me about 4 boxes of 94 UD series one and some other junk wax all later than 92. He wasn’t the talkative type and was happy to see me go. I would assume that she left before 92.” Another commenter on the thread said, “She had ties with TCMA which was run by Mike Aronstein from Yorktown/Peekskill NY”. Yet another writer adds that Mike Aronstein “invented plastic album sheets, 8-by-10 photos, autograph sessions and countless other hobby staples.”

Report from Target, 3/21/2021: the woman who worked for the baseball card distributor used to get swarmed by so many people (mostly adult men) in the store when she came in with a cart of new baseball/basketball/football cards, she had a nervous breakdown and quit while in the store one day, said a manager in the store. He said the demand for sports cards has rocketed the last year during Coronavirus.

We were in a piano store yesterday in White Plains, and the salesman there said the same thing: the last year has been a boon for them in selling pianos. People at home with a lot of time on their hands.