It’s that time of year — opening day this afternoon — and it is in the 40’s (high maybe 50 degrees) and overcast. In other words people are going to freeze their ass off who are there in person.

Yankee.blue forecast for the season: sunny skies, 100+ wins, and first place in the East. This despite the ton of question (?) marks that surround this team. Full, final prediction for the 2021 season at the bottom of this article.

The Yankees are loaded with question marks:

A lot of question marks. Seven.

The starting staff is what makes this Yankee team look like a 105-win team. If all works out. Even if Kluber and Taillon and Severino fail — the Yankees still have:

The Yanks also have Deivi Garcia and Clarke Schmidt in the wings.

Masahiro Tanaka is back in Japan, and James Paxton is back on Seattle (where I predict he will have a great year). Tanaka did not look good in the playoff game last year. Paxton pitched great in NY when healthy. If only the two of them pitched in the 2020 playoffs like they did in 2019…

I worry that Aroldis Chapman isn’t too old to be effective as a closer in the playoffs anymore. He’s going to be 33 this year, has had some failures in recent years (although some of it due to Houston knowing what pitch was coming), and his fastball wasn’t as fast last year. 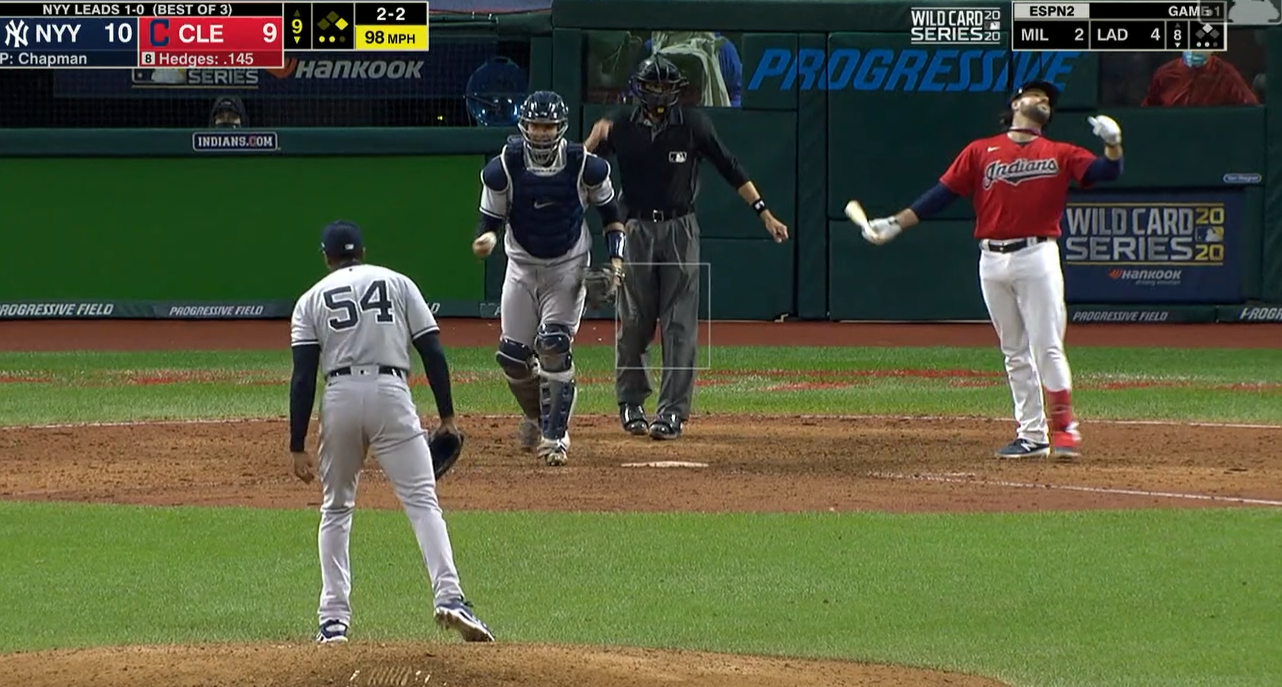 The Yanks have Zack Britton as the setup and insurance closer, but he’s out til June at the earliest after elbow surgery. Who knows how long it will take for him to be effective again.

Chad Green is still in the pen, as is Jonathan Loaisiga, Justin Wilson (currently out with a shoulder injury that an MRI said was just soreness), Darren O’Day, Michael King, and lefty Lucas Luetge.

But the one I’m most hopeful for is Nick Nelson — with the 98 MPH fastball and “special” change up. More importantly, manager Aaron Boone is excited about Nelson, which makes me excited. Said Boone after a Spring training game, “”He was able to get some key outs and some big swings and misses even when he was behind in the count,” the skipper said. “He made a couple pitches when he needed to and the trust in that changeup to go along with that high 90s fastball is something we really like. I feel like he continues to grow and polish a little bit. He’s definitely someone we are excited about.”

Overall — the Yankees bullpen could be awesome if Nelson is as good as hoped and Britton returns strong, and Chapman can keep bringing it another year at 33.

It’s not hard to predict another bad year for Gary Sanchez. He started out well in the Spring, with a just-hit-the-ball-where-it’s-pitched attitude, but by the end was in a major slump striking out all over the place. Backup Kyle Higashioka looked good last year.

Robinson Chirinos starts the year in the minors. I predict Sanchez will slump and Chirinos will be handling a bulk of the catching, with Higashioka by June. I hope I’m wrong and Sanchez does well.

Gleyber Torres made some great plays in the field at the end of Spring training so there is hope there for his defense.

Good Gleyber Defense +1
If you are keeping track at home

And he hit some shots. A good Gleyber — offensively and defensively — is a key to a successful year for the Yanks.

HAVE A DAY, GLEYBER! pic.twitter.com/BG9YxXqw8p

Luke Voit is out with a torn meniscus but should return by July. In his stead, the Yanks have Jay Bruce, and DJ LeMahieu — last year’s batting title winner — can play some 1st. Would be great if Miguel Andujar could learn the position.

Have no reason to believe Gio Urshela won’t continue to be a good spray hitter — hitting ball to all fields — and playing Graig Nettles – esq defense. When he was in the minors in the Cleveland organization Urshela had a similar ranking to Clint Frazier — so Urshela’s talent did not come out of nowhere.

Derek Dietrich starts the season in the minor leagues; I predict he will be up on the big club at some point and play some good ball for NY. If past seasons are an indicator, the Yanks will make a trade for infielders as they go along, if Dietrich doesn’t cut it.

All of New York are waiting to see if Aaron Judge and Giancarlo Stanton can stay healthy for a majority of the year — it would be the first time. I fully expect this to happen and am hoping for a big year from both. And Clint Frazier is scheduled to be the full-time left fielder; he looked good last year until a late season slump.

Aaron Hicks in center — high OBP and good fielder — although last year after Tommy John surgery he was throwing lollipops back into the infield. His arm strength will be something to watch.

And Brett Gardner as back as outfield reserve. He had a .354 OPB last year despite a .223 batting average, and can still give you Gold Glove Defense.

I’m going to go out on a Big limb and predict the Yanks will win 105 games this year and take 1st place in the Division. Tampa unloaded two of their best pitchers, which should tame their win total a bit.

I predict the Yanks make it to, and win, the World Series — although the playoffs are always a roll-the-dice crapshoot.

I think the Yankee starting staff will hold up and be at times awesome, and their bullpen will be good, and Judge and Stanton and Gleyber and LeMahieu will power an awesome offense. Maybe they’ll win 102 games; anything less than 98 will be a disappointment.

Disclaimer: I am an optimist.