Jordan Montgomery pitched brilliantly — a 1-hit shutout thru 5 innings — but was given a quick hook with 2 outs in the 6th after a cheap run and only 72 pitches thrown in a 1-1 tie. Thankfully the Yankee bullpen did it’s job until Luke Voit could walk it off in the 10th on a sac fly, 2-1 NY.

The only run off Montgomery was the result of a Brett Gardner error that allowed 2nd baseman and leadoff batter Hanser Alberto to go to 2nd on a leadoff single in the 6th. Alberto moved to 2nd on a sac fly, and then scored when leftfielder Ryan Mountcastle‘s popup fell for a single because the  Yankee infield had been playing in with the runner on 3rd and 1 out.

Montgomery got a 2nd out and had thrown only 72 pitches when unexpectedly manager Aaron Boone headed to the mound for the hook. Montgomery turned his back on  Boone as he headed to the mound; visibly upset at the quick hook when he was pitching so well. At the mound, Boone put his finger in Montgomery’s chest and Yankee Twitter speculated what was being said. From the post-game it seemed he was probably saying something like ‘you did great’, since in the post-game Boone had only praise for Monty.

That's THREE wins in 24 hours for the Yankees. Boone breaks it down. pic.twitter.com/AzscCyj8yV

Lucky for Boone, Chad Green got the final out of the inning, and the Yankee bullpen pitched shutout ball to send the game to extra innings.

Montgomery ended with 5.2 innings, 3 hits, 0 earned runs, and 9 strikeouts. It was great to see the 6’5 lefthander pitch so well after having been hit in his last start, and generally being off-and-on this year — his first year back from Tommy John surgery.

On the Baltimore hill, Dean Kremer got his 2nd Major League start — the first one being last weekend against the Yanks when he excelled. The Yanks had just touched up Keegan Akin the day before in their second look at him in a week — Akin had done so well against them the week before.

So it was a tough assignment for Kremer — facing the same lineup a second time — and he started off roughly: DJ LeMahieu led off the 1st with a double, Luke Voit lined out to move LeMahieu to 3rd, Aaron Hicks walked, Clint Frazier hit a sac fly to score the run, and Gleyber Torres singled to keep the pressure on with 1st and 3rd. But Kremer settled down and then pitched a shutout 2nd thru 5th.

Zack Britton pitched a shutout 8th and Aroldis Chapman pitched a shutout 9th for the Yanks. At one point Chapman limped off the mound a bit and smiled, and Boone and the infield went to the mound to ask him how he was doing. In the postgame, Boone revealed Chapman was fine and that “mother nature calls sometimes”. Yankee Twitter speculated he had crapped his pants accidentally on the mound.

Mother Nature Calls while Chapman is pitching, a breakdown pic.twitter.com/rHLpnU4JnL

In extra innings in Coronavirus, each team is allowed to start the inning with a runner on 2nd — the batter who made the last out of the previous inning is placed there. And so it becomes a game of almost Russian Roulet.

Jonathan Holder came through again for the Yanks in this situation like he did last week against Baltimore. In the top of the 10th, he got Rio Ruiz to pop the ball up in foul territory behind 1st for the 1st out, then got Cedric Mullins to line out to 2nd, before getting the final out.

Holder is now 3-0 2.12 after a very rough start to the season when Yankee Twitter was calling for his DFA (Designated for Assignment) if not outright hanging.

In the bottom of the 10th, Baltimore brought in hard throwing Hunter Harvey to try and get strikeouts. DJ LeMahieu was put on 2nd, and advanced to 3rd on a wild pitch by Harvey.

Luke Voit came up with nobody out and the winning run on 3rd — but Harvey strikes out a lot of guys so it was no easy challenge for Voit. Behind 1 ball, 2 strikes, Voit took a ball, then fouled off an 85 MPH curveball, and then fouled off two 98 MPH fastballs, before hitting the DEEP sac fly to centerfield for the game winner. 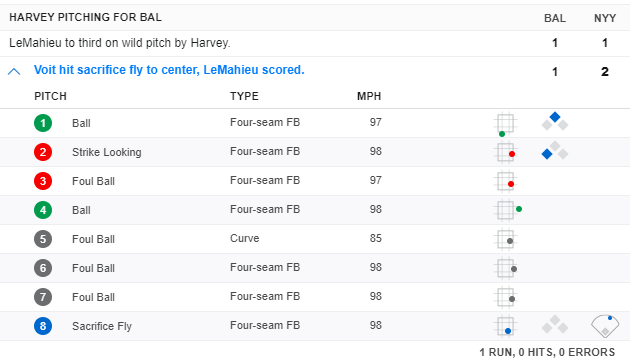 Gary Sanchez went 1 for 3 with a walk, and one of his outs was a line drive to the opposite field that was caught. He is slowly looking better and better at the plate. His average is now at .130. His OBP is .242, which is actually close to Miguel Andujar‘s OBP of .258.

Ryan Mountcastle continues to be one of the leading rookies of the short Coronavirus season. He is batting .368. John Sterling said on the radio that he doesn’t have a strong arm in left. But boy can he hit.