In his best performance of the year, manager Aaron Boone called all the right shots with the bullpen, and the bullpen came through. Then he called on Gleyber Torres to pinch hit in the 8th, and Gleyber came through with a 2-RBI double for the 3-1 victory at Yankee Stadium on a sunny, 70-degree Sunday afternoon.

Former Yank Ron Blomberg gave Boone two thumbs up on twitter: “Got to give @AaronBoone all the credit in the world. Made lots of moves today and they all worked out. I like him. The playoffs are around the corner and some of our big bats are coming off the IL. Be optimistic @Yankees fans.”

The Yankees started their winning rally with 2 outs in the 8th, score tied 1-1. Aaron Hicks beat out an infield hit, Clint Frazier singled, and Gleyber doubled them both home.

As @NYYfanForever96 put it, “Glasses gleyber with a PH two run rbi double to make it 3-1 Yankees”

Gleyber Torres started this short season in a horrendous slump, then started wearing glasses a week ago and has been red hot — he is 7 for his last 12. Yankee fans have noticed; in fact some fans noticed him squinting earlier in the season. He has become known as “Glasses Gleyber.”

J.A. Happ started for the Yanks, and pitched 5 solid innings, 1 run. Happ got in trouble in the 5th, when Baltimore shortstop Pat Valaika led off with a double, and 3rd baseman Rio Ruiz singled to right to put runners on 1st and 3rd nobody out in the 1-1 tie. But Happ induced centerfielder Cedric Mullins to ground to DJ LeMahieu at 3rd, who threw home to nail Valaika. Happ then struck out 2nd baseman Hanser Alberto swinging and Gary Sanchez rifled out Ruiz trying to steal 3rd.

Then Boone brought in a parade of relievers, who all pitched shutout ball — Adam Ottavino, Jonathan Holder, Chad Green, Zack Britton, and Aroldis Chapman, who got the save.

For the Orioles, John Means pitched 6 innings of 5-hit, 1-run ball; the only run he allowed was a solo homer to Tyler Wade in the 3rd that tied the game 1-1 at the time.

The Yankee “Machine Gun” bats — DJ LeMahieu, Clint Frazier and Miguel Andujar (batting 1st, 4th and 5th in the order respectively), and Torres — did most of the damage on the afternoon for the Yanks, besides the homerun by Wade.

Frazier got 2 hits and was on base when Gleyber hit the game winner in the 8th; Frazier scored the 3rd run. Andujar went 2 for 3. LeMahieu went 1-4 maintaining his league leading batting average at .350.

Those four Yanks especially, in general hit line drive after line drive — machine-gun style. Versus other Yanks in the lineup who have a more selective style — like Hicks and Aaron Judge who take a lot of pitches.

The aggressive approach of the Yank ‘Machine Gun’ hitters is important in the playoffs, where the last few years umpires have been calling anything close a strike to facilitate shorter (2.5 hours on average) games as extended playoffs head into cold late October and early November weather.

Years ago (late 90’s) the Yanks did well with a lineup of selective hitters who wore pitchers out. It’s a different playoff game these days, as the playoffs themselves have been extended with the extra wild card series, and now are scheduled to November, causing the apparent change in umpire strike calling.

It will be interesting to see if Frazier and Andujar stay in the lineup somehow when Judge and Stanton get back. Andujar was playing left field in this game — a hint at his future position.

Before the game, the Yankees held a moment of silence in honor of former Yankee broadcaster, and Hall of Fame pitcher, Tom Seaver. 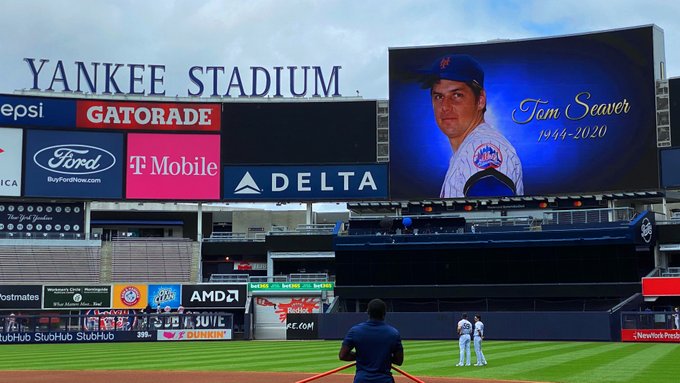