There are 5 Yankees in their history who have been legitimate Triple Crown threats — threatening to lead the league in Homers, RBIs, and Batting Average: Babe Ruth, Lou Gehrig, Joe DiMaggio, Mickey Mantle, and Bobby Murcer.

Murcer never won either a batting title or a homer title — but finished 2nd in homers in 1972 and 2nd in batting average in 1971.

Murcer finished just behind Tony Oliva for the 1971 batting title, losing out to him in the final week; Murcer hit .331 to Oliva’s .337.

Ted Williams at the time was the last player to win a Triple Crown, and he was quoted as saying Murcer was the player who had the best chance to be the next Triple Crown winner.

That’s how good Bobby Murcer was. Add to it he was the Yankee centerfielder, who led the league in assists (he had an average arm but threw people out because people ran on him) and was just 26 years old in 1972.

After an excellent 1973 (22-95-.304 (.357 OBP), Bobby Murcer went against Shea Stadium in 1974 and it wasn’t pretty. Shea was known as a pitcher’s park — a hitter’s hell. The Yankees played their home games at Shea while Yankee Stadium was being revamped in 1974 and 1975 — and Murcer was pulled away from the friendly confines of Yankee Stadium with its short porch.

Murcer had a horrible 1974 — 10-88-.274 (.332 OBP) — primarily because of Shea Stadium where he hit only 2 homers en route to a 10 homer season. So many balls that Murcer hit that year were caught at the wall — at both Shea and in other parks — Murcer became snake bit. The poor 1974 showing caused GM Gabe Paul to trade the 28-yr-old Murcer to the San Francisco Giants for superstar Bobby Bonds. It was a devastating trade for Murcer and ruined his career — he would have good years in San Francisco with the WIND of Candlestick Park and later the Chicago Cubs — before coming back to the Yankees for the last 5 years of his career, when he became a platoon player.

Well actually not that bad — Shea robbed him of homers — but he batted .302 there. Here are the splits:

Compare that to his glory years at Yankee Stadium:

In his first year in Candlestick for the SF Giants, Murcer hit:

One thing is for sure, Murcer did not have to battle the monuments in centerfield at Shea Stadium that he had to at Yankee Stadium.

Years later, hilarity ensued as Bobby Murcer had to navigate through those monuments in the @Yankees outfield. pic.twitter.com/MK0ObsMeE0

If Shea was a pitcher’s park — the question arises — put forth by John Morra — did it aid Tom Seaver? 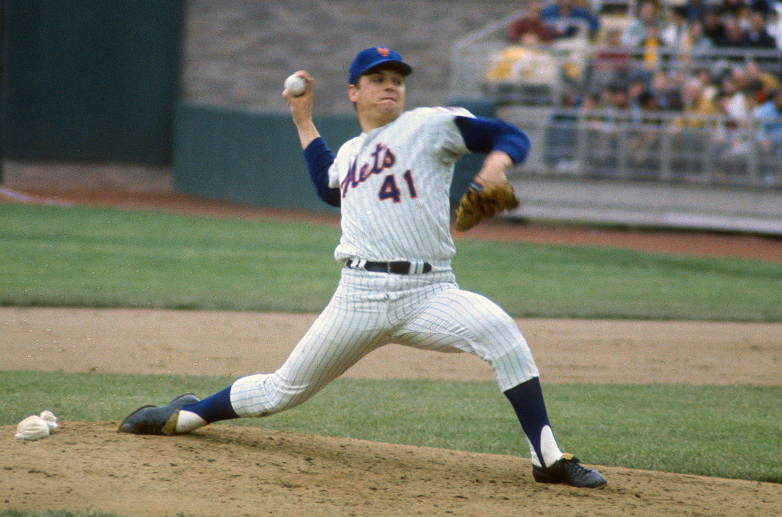 Here are Seaver’s splits during his glory years with the Mets — you be the Judge:

I leave it to you to decide — the numbers are all over the place. And there’s not enough numbers here to decide — we’d have to look at overall offensive stats at Shea for all players not just Murcer or Seaver.

Looking at the numbers above, it seems to have depended on the year — and that could be another variable. We saw that when the new Yankee Stadium opened, balls were FLYING out to right field. Then they made an adjustment — seemed to have put a barrier up in the main part of the Stadium to reduce wind going out to right field — and homers were reduced.

It is doubtful Shea Stadium had any such contraptions. But you never know — they did have all those colorful metal plates hanging up on the outside of the Stadium all around. Perhaps removing some in a particular spot…?