The 2021-22 Hot Stove League was shut down in November due to the baseball player lockout — and resumed on March 10, 2022 with the announcement the lockout had ended. This touched off a FLURRY of free agent signings and trades; 4 months of pent up planning and waiting — the race was on.

Yankee fans in particular were waiting 4 long months to see what GM Brian Cashman would do. The biggest question: which of the elite shortstops available would he sign? The odds on favorite was Carlos Correa — although many Yankee fans did not want this move — Correa caught cheating to cost the Yankees a World Series appearance in 2017 and 2019, and then accidentally crapping on Derek Jeter‘s Gold Gloves in defending the one he got in 2021.

Correa telegraphed that he wanted to be a Yankee — but did the Yankees want him?

The answer: no, they didn’t.

A Killer B Returns

Brian Cashman’s first signing was of backup outfielder Tim Locastro. Cashman moved his first pawn on the chess board.

Then, the Yankees announced their Spring training roster — which included former Yank Killer B Manny Banuelos! 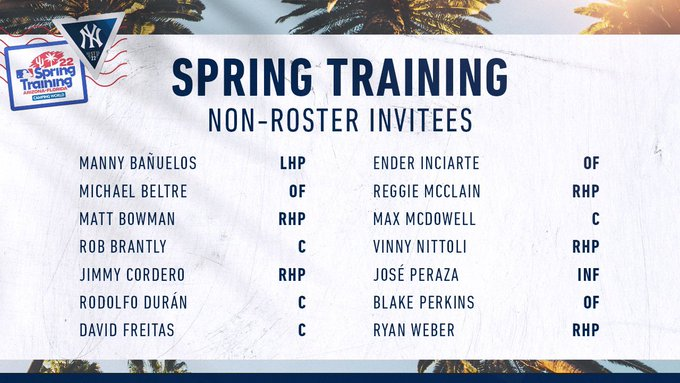 And then — 3 days into the race — the Yanks announced their big trade: Gary Sanchez and Gio Urshela to the Minnesota Twins for Josh Donaldson, Isiah Kiner-Falefa, and catcher Ben Rortvedt.

It wasn’t what Yankee Twitter was expecting — in fact it was like igniting an improvised explosive device. But in that one move the Yankees had announced:

Could we interest you in a JD home run video? 🙂 pic.twitter.com/guGY2B1NxR

In one move the Yanks improved their defense dramatically at 3rd, shortstop, and catcher. And told the fans they would not be signing Correa or any other high-priced shortstop. They’d be investing in their 2 upcoming studs. And in the meantime we’d have Isiah Kiner-Falefa. 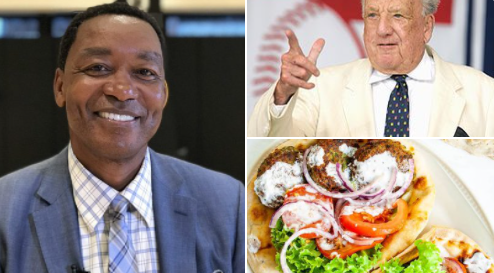 Jack Curry of YES Network had predicted this days earlier, when he said that “in conversation with Yankee hierarchy this winter — the way they speak about Peraza and Volpe .. leads me to believe we are more likely to see an Urshela at shortstop or stop gap shortstop while they wait for those 2 jewels in their system.”

Freddie Freeman is just one of the big-name free agents looking to sign a new deal for 2022 and beyond. pic.twitter.com/UU2DboN812

Rizzo for 1st Base

A day or so later — on March 15 — the Yankees announced they had signed Anthony Rizzo to play 1st base — 2 yr, $16M a year contract. NY had acquired Rizzo in a trade in August 2021 for prospects Kevin Alcantara and Alexander Vizcaino, and Rizzo wowed Yankee fans with his defense down the stretch.

The signing of Rizzo pissed off a good segment of Yankee Twitter who were waiting for them to trade for Oakland’s Matt Olson or sign World Series hero Freddie Freeman. Freeman has put up big numbers in recent years but he will be 32 next year — the same age as Rizzo.

The Oakland A’s then started their fire house sales — trading Matt Olson to Atlanta for prospects, and Matt Chapman to the Toronto Blue Jays for more prospects — and Yankee Twitter went ballistic.

When Freeman signed with the Los Angeles Dodgers — Yankee Twitter went ballistic some more — calling for the firing of Brian Cashman and for the Steinbrenner’s to sell the team.

Yanks to Add a Pitcher?

Rumors then heated up that the Oakland A’s were looking to deal their top 2 young pitchers — Sean Manaea and Frankie Montas. And Yankee Twitter started plotting out the players the Yanks would trade for them.

NY then jettisoned Luke Voit to the San Diego Padres for right-handed starting pitcher Justin Lange — a ‘high ceiling’ prospect who has had some control problems in the minors, it was said. Yankee Twitter seemed to welcome this move, although some asked ‘is that all we get for Luke Voit — who led the American League in homeruns the year before last?’

The End of the Story.. or Just the Beginning?

Correa then signed with Minnesota of all places and for only 3 years — shocking Yankee Twitter some more. And as of this writing — the story turns to Trevor Story — the last of the great free agent shortstops available winter 2021-22 — with rumors that the Yanks were interested. And so Yankee Twitter is abuzz figuring out where he’ll play when and if the Yanks sign him. NY has already acquired Kiner-Falefa for shortstop; some Yank fans think Gleyber Torres will be traded and Story put at 2nd (where DJ LeMahieu is targeted) or that Story will go to centerfield.

Tune in to Yankee Twitter as the story continues… or come back here in a few days when we’ll update this article.

BREAKING UPDATE: Sunday morning, March 20, 2022 at 10am: Trevor Story has signed with the Boston Red Sox.