Much is made of the Major League Baseball (MLB) draft every June — but fact of the matter is that to be drafted, a player must be a resident of the US, Canada, Puerto Rico, or other US territories. Players from other countries — for example Dominican Republic, Japan, or Cuba — are not subject to the draft. This is becoming controversial as more and more talent comes from countries outside the US these days.

The Yankees have been big spenders going after “International” rookie signings — like they used to be before there was a draft in the 1950’s and before (the draft started in 1965). Their international signings have and is paying dividends.

You may have missed this article from last June: Yanks Open International Signing Period with Spree — Club Agrees with Nine of top 25 Prospects, Could Face Penalty for Exceeding Bonus Pool

That article thrilled me as a Yankee fan during the relatively sad summer of 2014 — with the Yanks sporting such an old team that never challenged for contention. So the question — How are they doing?

To find out, at least partially, you can correlate that article with this one — Yanks top prospects entering 2015 according to MLB: http://m.mlb.com/prospects/2015?list=nyy

As of this writing — March 15, 2015 — a quick correlation shows Dermis Garcia has climbed to #16 overall prospect in the Yankee system, and outfielder Juan DeLeon is #15.

Luis Severino — currently the #1 Yankee prospect (and #23 overall in baseball) was a Yankee international signing in June 2012. The Yankees also signed catcher Luis Torrens that year, currently their #10 prospect. 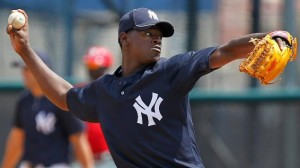 The Yanks top international signings of 2013? Outfielder Leonardo Molina is ranked their #29 prospect, and shortstop Yonauris Rodriguez is not ranked in top 30 — however he is only 17 and batted .315 on the Dominican Summer League team in 2014.

PS: if the article above disappears, here is a reprint of the first two important paragraphs:

According to industry sources, New York agreed to terms with several highly regarded international prospects, including shortstop Dermis Garcia, ranked No. 1 on MLB.com’s Top 30 International Prospects list for a $3 million signing bonus, along with Dominican third baseman Nelson Gomez (ranked No. 2) for $2.25 million, Dominican outfielder Juan DeLeon (No. 5) for $2 million, Venezuelan outfielders Jonathan Amundaray (No. 7) for $1.5 million and Antonio Arias (No. 9) for $800,000.