The Yankees were being no hit by the Houston Astros for the 2nd game in a row — this time into the 7th inning — when they launched an incredible comeback:

And in between — the Yankee bullpen saved the day — especially some gutsy pitching by Michael King in the top of the 10th, when he escaped a bases loaded, 1 out situation by inducing consecutive pop ups.

What was the longest day — being no hit for the second game in a row to the hated rival Houston Astros on a Barn Burner of a Hot, sunny Sunday afternoon at the Stadium — turned into one of the best wins of the year. Yankee fans at the Stadium went home happy and Yankee fans all over New York and the world could enjoy their Sunday evening. The Yanks had split the 4-game set with Houston.

“I think it was a big win because I think this is one of the better teams we’ve faced this year,” said DJ LeMahieu afterwards. “You could tell they were coming at us with everything they had. I don’t think we played our best this series — but to not play our best and to split; we did enough to win 2 and to keep it rolling. I’m sure we’ll have some more battles with them down the road.”

1. Cortes Valiant in the Sun

Nestor Cortes Jr struggled a bit again — for his 3rd straight start — but was valiant again, and hung in.

He allowed a homerun to Jose Altuve the Cheater on the first pitch of the game. Cortes then retired the side in order, and pitched a 1-2-3 second inning, and had an easy 3rd inning.

Cortes was helped by excellent Yankee defense — like this play by Anthony Rizzo in the 2nd:

Anthony Rizzo!!! Are you serious?!? pic.twitter.com/vsl36stxaL

But in the 4th, after getting the first 2 outs, Cortes allowed an infield single, then double to shortstop Jeremy Pena, and with 2nd and 3rd, 2 outs — allowed a 2-RBI single to left fielder Mauricio Dubon for a 3-0 Houston lead.

Finally Cortes got the final out on a grounder, but damage was done. Down 3-0 and still with no hits, the Yanks looked like they were heading for a loss.

When asked afterwards if the league had figured him out or if he’s not locating, Cortes said, “It’s been a rough — 2 games? In this game I went down in the 1st inning and battled to keep my team in the game. Luckily we came back in the 7th and 8th and were able to walk it off in the 10th. As far as the league, I don’t know — maybe. We’ll have to see. We’re about half way, so we’ll see what the other starts have in store for me.”

2. Urquidy No Hit the Yanks Into 7th

Jose Urquidy is a 27-year-old, 6-foot right hander who came in with a 6-3 4.68 record — but just like Cristian Javier the day before, Jose was lights out from the start throwing two pitches almost exclusively — a 95-MPH fastball and an 80-MPH slider. Same as Javier. (And Ron Guidry when he excelled in 70’s.)

Here’s a typical pitch sequence of Urquidy — to Giancarlo Stanton and Josh Donaldson — almost identical to the pitch sequences of Javier the day before — all fastballs and sliders. 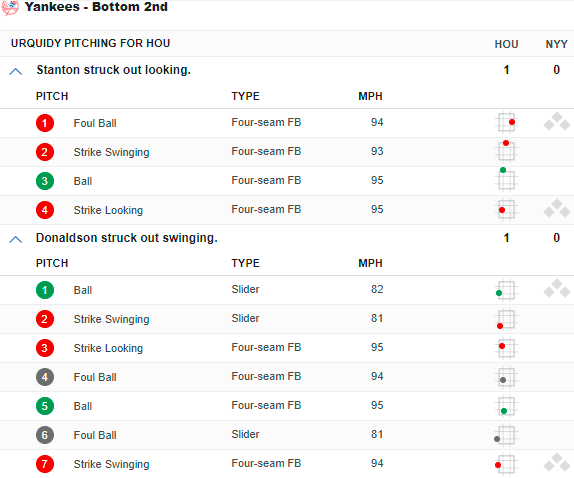 3. Giancarlo Gets 1st Hit — A BLAST to Center

It was a Dog’s Day afternoon into the 7th. Katie Sharp tweeted that the Yankees were the first team in 70 years to be no hit for so many innings in a row.

This is the longest hitless streak (by innings) for the Yankees in the last 70 years (h/t @EliasSports).

I do know that no team has been no-hit in consecutive games.

In the bleachers, people were starting to entertain themselves with other things with the oppressive sun beating down and the 95 degree temps melting everyone.

This girl had the whole section rooting for her bottle flip pic.twitter.com/CxSyGP7OKx

For the Yanks, it was embarrassing. Houston was Kicking their Ass. NY couldn’t get a hit. Yankee fans were wondering if they’d ever get another hit.

And then up stepped Giancarlo Stanton with 1 out in the 7th. BOOM. Centerfield. Homerun. Into Monument Park! 3-1 game.

In the 8th, Phil Maton came on and struck out Aaron Hicks leading off, but allowed a single to Isiah Kiner-Falefa giving the Yankees hope.

Maton then struck out Jose Trevino for the 2nd out. DJ LeMahieu came up and John Sterling on the radio mentioned that Aaron Judge was in the On-Deck circle if LeMahieu could get on.

But they didn’t need Judge — LeMahieu ripped a 386-foot homerun to left for a tie game!

DJ with an absolute banger. pic.twitter.com/WLXNXQ9gDu

Meanwhile the Yankee bullpen was fantastic in holding Houston down. Miguel Castro pitched 2 brilliant shutout innings — the 6th and 7th.

The Yanks mounted a rally in the bottom of the 9th — Gleyber Torres got on with a 1-out walk, stole second — the throw to 2nd getting away for an error and Gleyber sprinted to 3rd.

Gleyber took a big lead off 3rd with 1 out and Aaron Hicks at the plate. Hicks worked the count to 3-2, but then struck out and Gleyber in trying to race back to 3rd, fell down spraining his ankle. He was a dead duck at 3rd — a strike-em-out, sprained-ankle double play.

Houston put their inherited runner, Jason Castro, on 2nd to start the 10th. Michael King got Jose Altuve to hit a grounder to short, but Kiner-Falefa bobbled it and Altuve was safe at 1st on the error — 1st and 2nd — nobody out.

The Yanks then picked off Castro at 2nd — but Castro took off to 3rd and was safe, even after the play was reviewed.

King got a HUGE strike out of J.J. Matijevic for the 1st out.

But Altuve then stole 2nd and King walked Alex Bregman to load the bases with 1 out.

With the game looking lost, King used his inner Houdini to get consecutive pop ups of Kyle Tucker and Lourdes Gurriel — part of the heart of Houston’s order — to end the inning. Yankee Twitter ERUPTED in joy and respect for The King.

Michael King gets out of the jam! To the bottom of the 10th we go! #YANKSonYES

Watch on YES and stream it LIVE with the YES app: https://t.co/0cgHA97Iau pic.twitter.com/bG54oHHbxL

In the bottom of the 10th, with inherited runner Aaron Hicks on 2nd and righty reliever Seth Martinez pitching — Isiah Kiner-Falefa tried to bunt but failed. With 2 strikes the bunt was off but Kiner-Falefa layed one down anyway — a beauty that was successful.

DJ LeMahieu struck out swinging against the righty Martinez so it looked like Dusty Baker‘s strategy had worked — and with 2 outs Aaron Judge stepped to the plate.

Judge swung and missed at a slider.

IT'S A WALKOFF THREE-RUN HOME RUN! IT'S A JUDGIAN BLAST TO DEEP LEFT CENTER INTO THE BULLPEN!

Judge said the team was never worried. “There was no panic all day. Even though we were getting no hit for a while, there was just no panic. We trust in each other; we trust in this team. And when you got the fans like this, you can do anything you want.”

When asked where that quiet confidence comes from, Judge responded “When you’re the best player on the team, how can you not?” That last statement went viral on Twitter.