Gerrit Cole pitched Great — it was a 0-0 tie into the 7th, when he allowed a solo homer to J.J. Matijevic — a power-hitting 1st baseman just called up from AAA.

Jose Altuve “The Cheater” added insurance with a solo homer in the 8th off Michael King. Yea that’s the type of afternoon it was.

“Today was obviously shocking,” said Josh Donaldson afterwards. “We have a really good lineup. He made it tough today. Fell behind a few times, and really did a good job of locating when he was behind. I felt like personally I had a couple of pitches that I could hit, but just barely missed them; fouled them off. He was really good.”

The only good news to come out of this game was that Gerrit Cole was Brilliant. Again. Worries of him only being good with sticky stuff seem ridiculous now.

He mowed down the hard-hitting Houston lineup with ease. As ESPN national reporter Cole Harvey put it, “First time seeing Gerrit Cole in pinstripes in person. His put-away pitches tend to be pretty devastating. That 99mph heater to K Alvarez was something.”

Coming in, ESPN listed Cristian Javier as a reliever. Even after the game, they list him as such — not listing his win-loss record but saying he has 0 saves — despite him coming in with a 4-3 record. He has relieved 4 times this year, but started 10 games. He’s 5-3 now with a 2.73 ERA.

Javier pitched like a reliever — he used only 2 pitches to put away the Yanks all afternoon: a 95-MPH fastball and a devastating 78-MPH slider. PS: This reminded one of the way Ron Guidry pitched when he came up — as a reliever turned starter. Sparky Lyle taught him his slider and the rest was history.

Here’s a typical pitch sequence as Javier struck out Josh Donaldson and Giancarlo Stanton in the 4th: 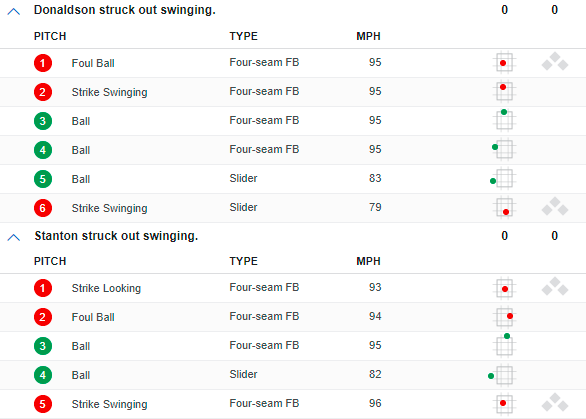 Javier struck out 13 Yankees and only walked 1.

All 13 of Cristian Javier's strikeouts. pic.twitter.com/Rmpsz8rwyY

3. Yanks Had a Chance

The Yankees didn’t get any hits.

But with the score 0-0 and then 1-0 late, the Yanks always had a chance to tie this game with one swing of the bat.

Even down 2-0 after Altuve’s homer in the 8th, the Yanks had their best chance of the game in the bottom of the 8th, when Aaron Hicks led the inning off with a walk (there’s that Aaron Hicks getting on base again), and after 1 out DJ LeMahieu walked bringing up Joey Gallo.

Gallo hit a DEEP FLY BALL TO RIGHT that was caught in the warning track 2 feet from the wall. And that was that for the Yankees. Aaron Judge batting next, grounded out.

Lucas Luetge had a tough outing in the top of the 9th — allowing a leadoff walk, then double, then single to make it 3-o — but thankfully Aaron Judge threw the 2nd runner out at the plate for the 1st out of the inning. Luetge allowed another single and walk in the inning before getting out of it.

But it was an ugly inning that eliminated any hopes for a bloop and a blast to tie it in the bottom of the 9th. NY entered the 9th needing 2 bloops and a blast, or 2 walks and a blast, or .. in this game’s case .. 6 walks to tie it. Instead NY went out 1-2-3 against Ryan Pressly for the old ballgame.

Pressly was a major contributor to coughing up the Houston win Thursday night when Aaron Hicks hit the big 3-run bomb in the 9th to tie it — today he’s part of a no hitter.

News came out during the day that Clint Frazier is going to change his name to Jackson Frazier. Jackson is his middle name.

Some Yankee fans on Twitter chided him for this but Yankee fan @CheapoHal pointed out the Yankees already have a player on their roster who changed his name: Mike Stanton changed his name to Giancarlo Stanton early in his baseball career.