Luis Severino is the lynch pin of the Yankee rotation and season. If he stays healthy and continues to pitch well, he is the 3rd ace behind Gerrit Cole and Nestor Cortes Jr — the link to Jordan Montgomery and Jameson Taillon at backend of rotation — giving the Yanks a great starting staff (with Michael King, Luis Gil, and Clarke Schmidt as backups).

And so it was all good news as Severino provided another strong start on a Monday night in Baltimore — pitching 6 innings of 1-run, 1-hit ball, and striking out 7.

“I thought he had all his pitches going,” said Aaron Boone afterwards. “I thought he threw some good heaters; the slider and changeup were all a factor. I thought he won some situations where it was 3-2 and he need to make a pitch and he was able to do it.  And I thought late he smelled the finish line and took it up another gear on his fastball. So good strong start for him.”

NY got homers from Jose Trevino, Josh Donaldson, and Anthony Rizzo to win easily, 6-2. The Yanks are now 26-9, the best record in baseball. Baltimore falls to 14-22.

Luis Severino escaped trouble in the bottom of the 1st — Cedric Mullins led off the inning with a fly ball to the wall in left that Joey Gallo caught up with, and then dropped for a 3-base error. Severino walked Trey Mancini so it was 1st and 3rd nobody out.

But right fielder Anthony Santander hit a bloop betwen 1st and 2nd that Gleyber Torres made a diving play on then tossed to 1st for a double play. It was the play of the game for the Yanks as Severino got a groundout to end the inning.

“Great play. He’s been great all year defensively,” said Severino about Gleyber afterwards. “Because of that I got out of that inning without a run.”

Severino threw his 98-MPH fastball, 88-MPH cutter, 91-MPH changeup, 82-MPH slider to effect — cruising through the next 2 innings until Santander touched him for a homer in the 4th to make it 4-1 Yanks.

The homer was a one-off and the only hit Severino allowed in the game. He struck out shortstop Ramon Urias with a 97-MPH fastball to end the sixth and his outing at 95 pitches. A strong start.

2. Trevino’s 1st Homer as a Yankee

The Yanks got Severino 4 runs off Baltimore starter Kyle Bradish. In the 2nd, Giancarlo Stanton ripped a double to deep center, scoring Anthony Rizzo — but getting tagged out himself in a rundown between 2nd and 3rd.

114.2 mph off the bat of Big G to bring home Rizzo. pic.twitter.com/Ze3h0wGROh

In the 4th, Gleyber Torres led off with a single, Isiah Kiner-Falefa got on with an infield single, and Jose Trevino hit his first homerun of the season, a shot to right field — and it was 4-0 NY.

Congrats on your first homer as a Yankee @HipHipJose5 👏 pic.twitter.com/xQynNuQIzo

Jonathan Loasiga allowed a leadoff single in the 7th but then got a double play and easy inning, and Chad Green threw SMOKE in the 8th for a 1-2-3 inning. But not without Cedric Mullins giving him an epic at bat for the 2rd out: with the count 1-2, Mullins fouled off 8 of 9 pitches, including 5 in a row — before flying out on the 12th pitch thrown by Green. 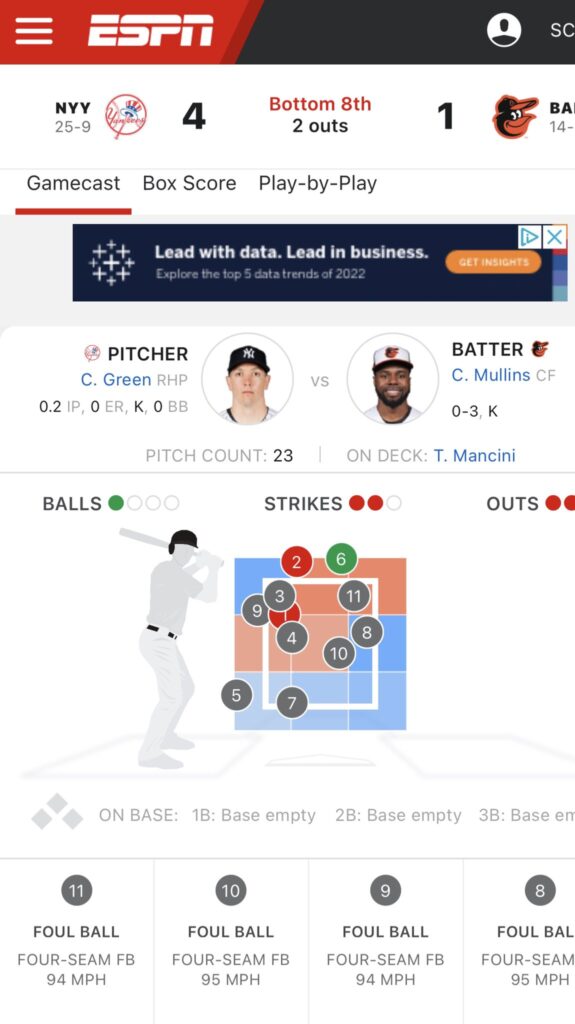 Up 4-1 in the 9th and with Aroldis Chapman warming in the pen and Yankee Twitter twitching — Josh Donaldson gave the Yanks an all-important insurance run with a rainmaker to centerfield to make it 5-1 NY.

Anthony Rizzo went back-to-back and belly-to-belly with a 406-foot  homerun to right and it was 6-1.

Aroldis Chapman allowed a 1-out homer to Anthony Santander — his 2nd homer of the evening — in the 9th but then struck out the last two batters for the old ballgame.