Easily done when Gerrit Cole is your starter and you have Aroldis Chapman in your pen. Cole pitched 8 shutout innings; Chapman got the save and the Yankees go to 20-16, a game behind Boston who lost later in the evening to former Yank James Kaprielian.

2. Hicks with the Sac Fly

The game was 0-0 thru 6 innings — Tampa threw their vaunted bullpen at the Yanks: it was their bullpen day. Collin McHugh started and pitched 2 shutout innings; Ryan Yarbrough threw 3.1 shutout innings. But the Yanks got to Ryan Thompson in the 7th.

Aaron Judge led off the 7th with a single, and Gio Urshela hit a double to move him to 3rd. Luke Voit hit a shot to 3rd that was a groundout and did not score the run.

Then Aaron Hicks stepped up as the key at bat of the game — with 1 out he had to get the run home on an out at least and he did — a sac fly to centerfield.

Manufactured ☝️ for the lead 👏 pic.twitter.com/Sjpkf0CiLs

The Yanks had the run they needed.

Judge finished 3 for 4 on the day, and was 2 for 4 yesterday with a homer — his slump of last week is ages ago. He is now batting .271. During the game, this stat came up on where, and where not to pitch Aaron Judge: 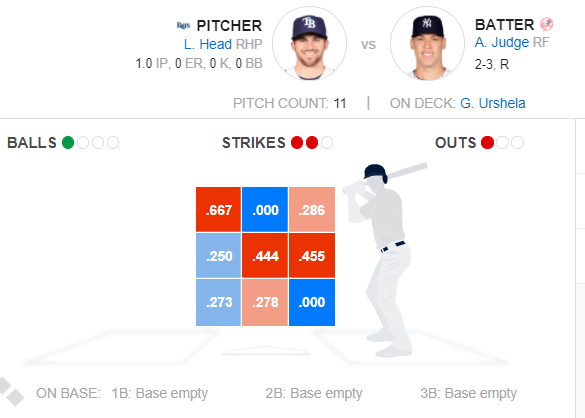 3. Chapman for the Save

Aroldis Chapman came in for a 1-2-3 out save. Aaron Boone made a quick mound visit with 1 out which scared Yankee twitter a bit but he went back to the dugout and Chapman struck out pinch hitter Mike Brosseau and got Manuel Margot — swinging for the moon — to pop out to 3rd for the old ballgame.

Clint Frazier got thrown out after his 2nd at bat for arguing a 3rd strike call; he is now at .146. Brett Gardner (.188) replaced him.

The Yankees got only 6 hits; Tampa got 4.