In one of the most tense and intense Yankee games in years, Aaron Judge hit a bottom-of-the-9th, 1-out, 2-2 pitch past the pitcher for an infield hit as Tyler Wade flew in from 3rd base with the winning run — breaking a 0-0 tie — causing Yankee Twitter to explode in ecstasy and the Yankee players to sprint onto the field in victory jubilation.

The win clinched a Wild Card playoff spot for the Yankees — a loss would have thrown them into an oblivion playoff-for-the-playoff game against at least Toronto and possibly some kind of series run-off including Seattle and Boston as well.

Toronto was winning big at the time and did win; Seattle was losing and lost, and Boston was tied when the Yankee game ended, but won later on.

The smoke has cleared, the regular season is over, and NY will play Boston at Fenway on Tuesday in the Wild Card game.

The Yankees can finally smoke their Made-the-Playoffs Cigar — having been denied by Tampa on Friday night and Saturday.

“It’s been a crazy year for us; lots of ups and downs,” said Tyler Wade afterwards. “But we never stopped fighting. We’re down to the last inning and that’s the guy you want up there; Judge has had an unbelievable year. I knew he was going to come thru and I was doing everything I can to score for him and get us to the post season.”

Jameson Taillon started the pressure-packed game — the Yankee season on the line — and pitched great. He had pulled himself from his previous start just 5 days earlier when his sprained ankle started barking — so Yankee fans were bewildered he was even starting. 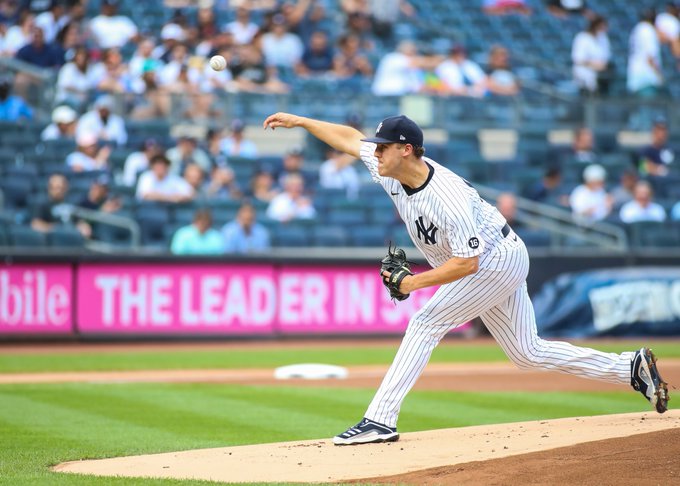 Taillon blew thru the first 2 innings, then allowed a 1-out walk and single in the 3rd — putting 1st and 3rd only 1 out — and anxiety rose.

But Taillon struck out Randy Arozarena and got Wander Franco to fly out to left. PHEWWWWW.

Taillon got the 1st out of the 4th and Boone was out to pull him — bringing in the lefty Wandy Peralta to face the lefties Austin Meadows and Ji-Man Choi.

Peralta got Meadows to hit an easy grounder to 3rd — but nobody was playing 3rd with the shift — so it was a hit and Meadows ran all the way to 2nd for a double. Choi then walked — the lefty-vs-lefty strategy went awry.

Wandy got Mike Zunino to groundout, but then threw a wild pitch and it was 2nd and 3rd, 2 out.

Joey Wendle then hit a line grounder towards right that had Base Hit written all over it, but Gleyber Torres made a terrific play on it for the final out, saving 2 runs. PHEWWWWW!

Meanwhile Michael Wacha was laying down a great outing — 5 innings of 1-hit, shutout ball. As the game progressed 0-0 it became clear a single run was going to possibly be the game.

The intensity rose with each inning.

Aaron Boone — in his best in-game managing of the year — worked his bullpen to perfection. Wandy struck out the first 2 batters of the 5th — lefties Kevin Kiermaier and Brandon Lowe — and there was Boone to relieve him and bring in Clay Holmes to face the righty Arozarena. Holmes struck him out swinging.

Holmes got the first 2 outs of the 6th — and there was Boone to relieve him, and bring in Chad Green to face lefty Austin Meadows.

Green got Meadows to popup into foul territory by the Tampa dugout on the 3rd base line — and Gio Urshela came sprinting from shortstop to make the catch near the dugout — his momentum flying him into the Tampa dugout runway — for the final out of the inning. It reminded everyone of the play Derek Jeter made years ago in a big game against the Red Sox.

The game was halted for 10 minutes as the Yankee trainers and medical staff came out to attend to Gio, who was reportedly on the ground inside the dugout. Finally he emerged, limping. Later, he came out to play shortstop to start the 7th.

Jomboy noted the incredible play — and call — that umpire Angel Hernandez made as well.

Ángel Hernández making plays on the last day of the season. fighting for that playoff spot pic.twitter.com/Lb5zlCqaHP

Chad Green allowed a leadoff double to Choi in the 7th, but then struck out Mike Zunino and got Wendle to line out to Aaron Judge in right for the 2nd out. PHEWWWWWW.

Green walked Kiermaier and with 1st and 2nd, 2 outs — Boone reached for Jonathan Loaisiga — who got the tough Brandon Lowe to popup in foul territory by the stands down 3rd base — and Rougned Odor made the catch.

In the top of the 8th — 0-0 tie — intensity climbing to fever pitch — Arozarena led off with a squibbler hit that Gary Sanchez had no play on, then stole 2nd. He moved to 3rd on a fly out by Wander Franco — where he stood with 1 out.

But Jonathan Loasiga got tough — striking out Nelson Cruz and getting Austin Meadows to hit an easy fly out to Judge in right.

In the top of the 9th, Aroldis Chapman came in. And you can imagine the tension on Yankee Twitter.

Chapman got the first 2 outs, but walked Joey Wendle — who stole 2nd. With the go-ahead run on 2nd — intensity reached fever pitch as Chapman struck out Manuel Margot swinging!

Tampa sent out Josh Fleming to pitch the bottom of the 9th. Rougned Odor led off with a single to center. Tyler Wade came in to run for him.

Gleyber Torres hit a SHOT to deep right center, caught at the warning track — and Wade moved to 2nd.

Anthony Rizzo RIPPED a single to right — too shallow to score the run — Wade had a red light at 3rd that turned into a green light as Arozarena threw badly off-line to home — but it was too late; Wade stayed at 3rd.

With 1 out, Tampa brought in Andrew Kittredge to face Aaron Judge.

All Judge needed to do was hit a sacrifice fly. But no sure thing.

The count went 1-0 when Kittredge threw a 90-MPH outside slider — Judge took a Big cut and missed.

Kittredge threw a 97-MPH sinker low and inside — Judge took another Big cut and missed.

Kittredge threw another 96-MPH inside sinker — Judge laid off and it was a ball.

Judge laid his bat on the ball, ripping a light single past Kittredge who got a glove on it, to Brandon Lowe who rifled home too late as Wade FLEW in from 3rd for the Old Ballgame. Yankees Win. The Yankeeeees WINNNN!

All Rise to the Occasion. pic.twitter.com/EOtbLMglep