The Yankee offense JUMPED on top early in this one, with a run in the 1st that could have been more, then CRUSHED it in the 3rd inning to jump to an 8-0 lead and the old ballgame. Masahiro Tanaka was tough through 5 innings, then left it to the bullpen to finish. This game was never in doubt — from the 3rd inning on it was a relatively Boring playoff game at Yankee Stadium on a cold October night — a game that lent itself to the Wave — but Yankee fans stood firm and did not relent to the frivolity.

The Twins had sent a curve ball at the Yankees — 24-yr-old Randy Dobnak who came up at the end of the season and went 2-1 1.59 in 28 innings — figuring the only way to stop this Yankee offense is to throw a pitcher they had never seen before at them. Dobnak only recently (2017) was an Uber Driver, which caused much fanfare in national media before his start — and taunting in conversation by Yankee fans. Former Yank Phil Hughes put out this warning:

The best Gate into Yankee Stadium is Gate 6 — right off the train. DON’T use Gate 8 — massively long lines — or Gate 4 for same reason. But even if you used Gate 6 for this game, after having parked the car up on 168th Street and Grand Concourse — you might have just entered the Stadium and heard the loud applause as DJ LeMahieu led off the 1st with a double. Aaron Judge walked, Brett Gardner flied out to move LeMahieu to 3rd with 1 out — and then Edwin Encarnacion ripped an RBI single to left off the Uber Driver for a 1-0 lead. Giancarlo Stanton stepped up and ended the inning with a buzz killing double play.

If you spent time on the Waffle Chicken line before getting to your seats, you might have just got to your seats when Didi Gregorius stepped up in the 3rd inning with the bases loaded.

The Waffle Chicken stand holds three (3) waffle irons, each producing 4 small waffles — the top/bottom of 2 sandwiches — which is one slider order (2 slider sandwiches per order). Each waffle iron seems to be the kind you’d have in your house, and take 5 minutes to make a new waffle. This means their rate of waffle chicken slider orders is 3 per 5 minutes. Once the waffles are ready, they make up 3 new 2-slider orders and then pour new waffle mix. This creates a REALLY long line for the Waffle Chicken Sliders. It would be longer, but most people get to the end of the line, wait 10 minutes, see the line not moving, and leave the line. 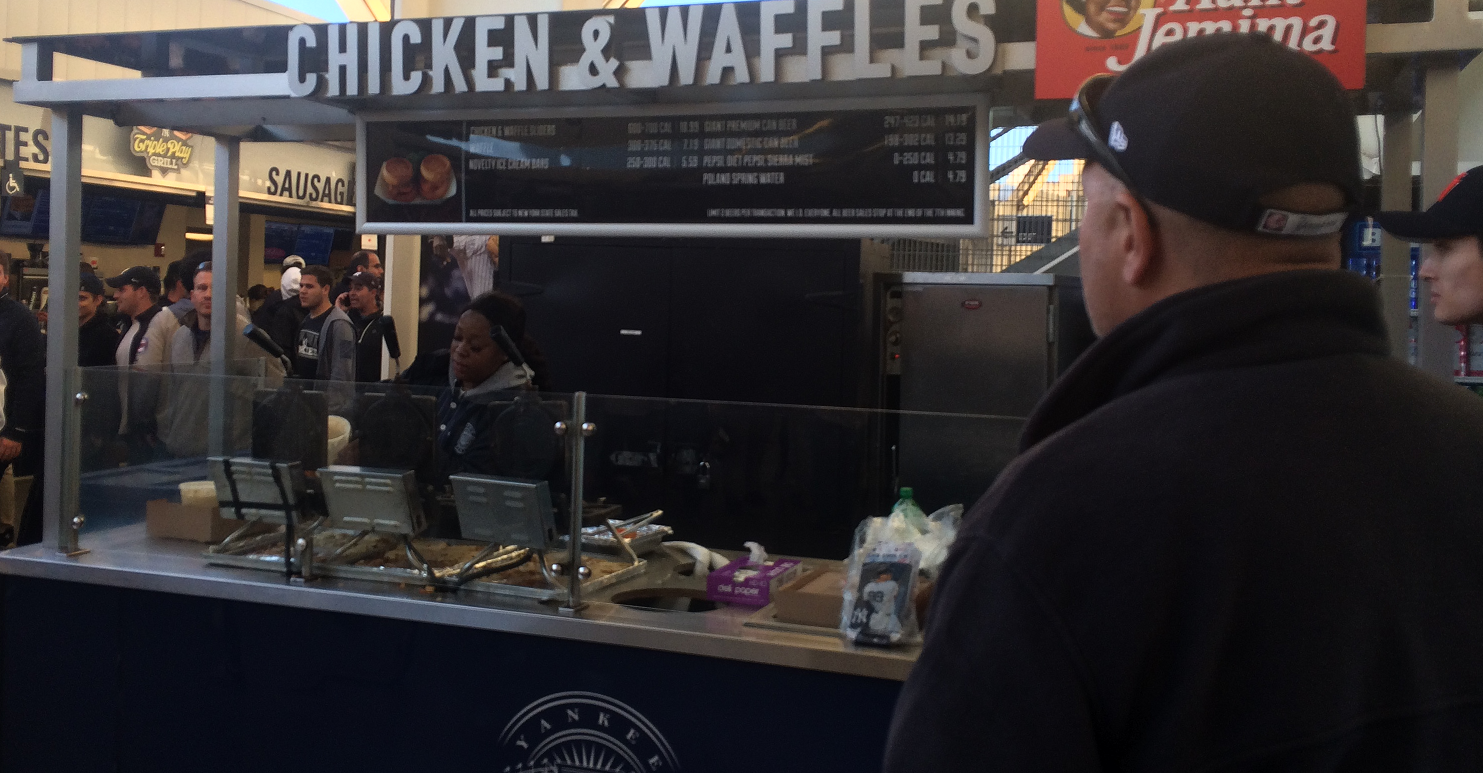 The line is well worth it. The Sliders taste Great. Especially if you walk up to you seat section just as Didi Gregorius is hitting a Grand Slam.

Palindrome of the day:

PS: Everyone seemed to be wearing white in the section that Didi hit the Grand Slam into — something like 480 people came wearing Bronx Pinstripe fan tshirts.

That made it 8-0 and the old ballgame. You could sit in your seat and enjoy your Waffle Chicken Sliders. 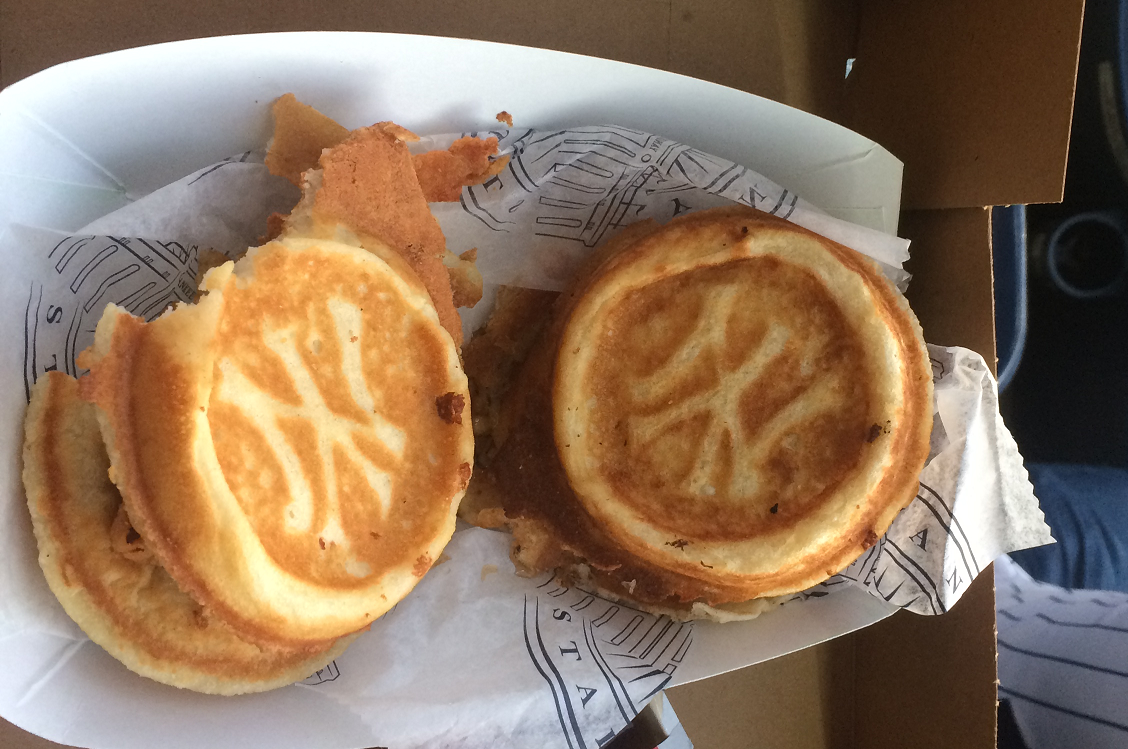 On this night, Masahiro Tanaka pitched 5 solid innings and the bullpen made sure the big lead stayed big throughout.

Sitting in the Upper Deck left field, where the cool breeze came through on this cool October night with temperatures in the 50’s — caused fans to start thinking of things to keep warm. Yankee Stadium held steadfast from doing the wave despite the big lead. Some pidgeons flew by at eye level and fans yelled hello. 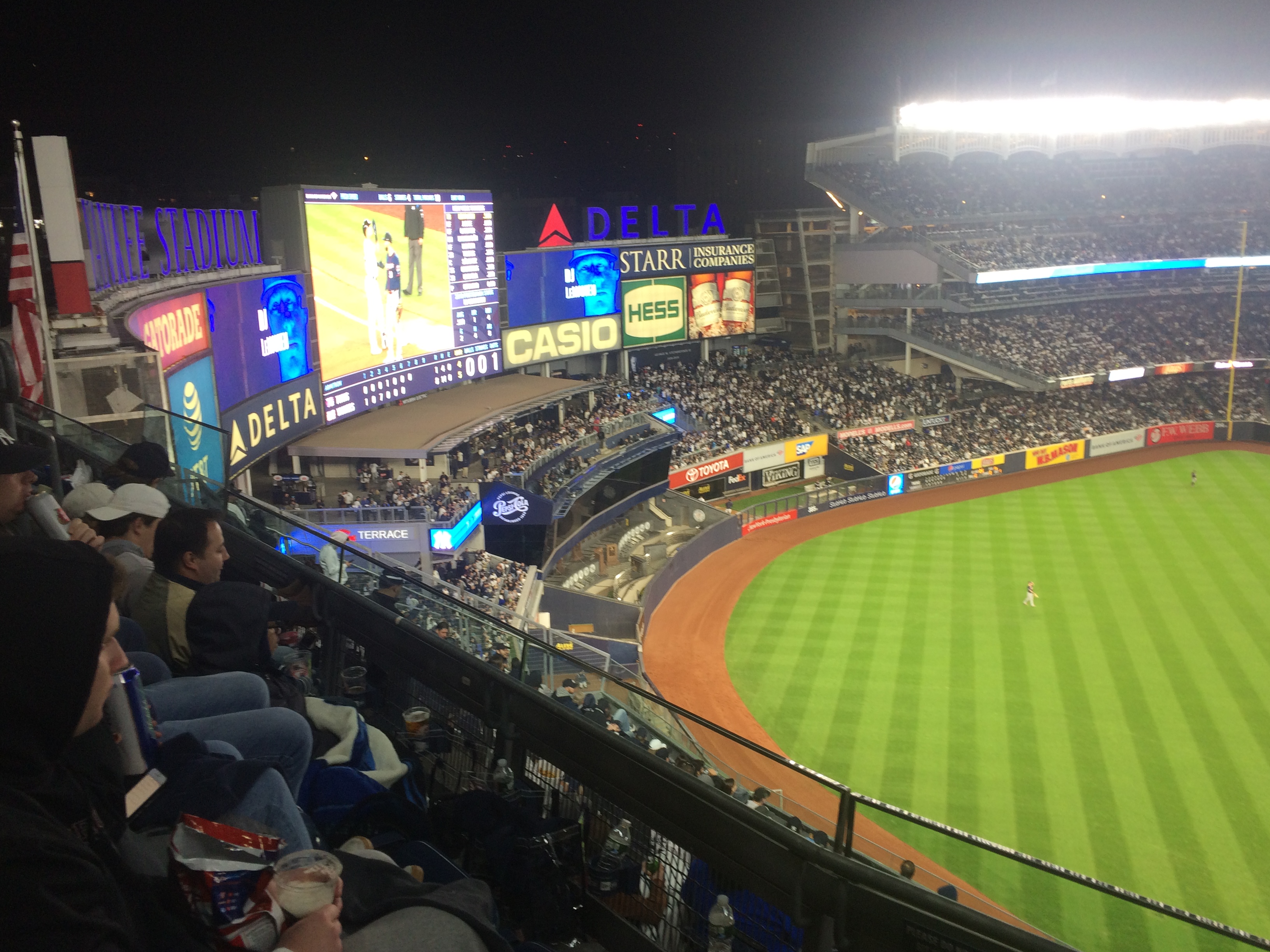 Tommy Kahnle, Adam Ottavino, and Tyler Lyons pitched a shutout inning each, and then Jonathan Loaisiga struggled a bit in the 9th — allowing 2 hits and a run — before getting the final out.

Aaron Judge continued his superman play — excellent defense in right and 2 for 3 with 2 walks at the plate. Didi Gregorius finished with 2 hits, as did Edwin Encarnacion and Gio Urshela.

DJ LeMahieu, Brett Gardner, and Gleyber Torres all finished with a hit each.