CC Sabathia used his heavy power pitches to gain his 247th career win — pitching 5 shutout innings to help the Yanks to a 6-2 win over KC at the Stadium on a 70-degree Friday night with rain threatening and coming later in the game.

CC looks like he should NOT retire at the end of this season — and could pitch another 4 years if he wanted to, and if his heart feels right. Gone are those three years of knee problems when he was 32 to 34 years old. Now at age 38, we have vintage CC — he has not allowed a run in the two starts he’s had this season after sitting out due to a suspension (dating to last year) and the heart surgery recuperation.

On the defensive side, Clint Frazier, playing rightfield as Aaron Judge got rest at DH — made a spectacular throw in the 3rd to nail catcher Martin Maldonado at home plate on a fly ball by Whit Merrifield — turning a possible run into an out (and double play). Huge.

Clint Frazier with a ROCKET 🚀pic.twitter.com/WGt2JZIYd8

On the offensive side of the field, Brett Gardner continued to turn back time to 2017 when he was JACKING balls out of the park — last night he JACKED one to deep right center off Royals’ starter Jakob Junis for a 2-run homer in the 3rd to give the Yanks a 2-1 lead.

The turning point in the game was the 5th, when Sabathia — who was in the 70’s in pitches thrown and was on a pitch count (Yanks were going to pull him after not much more than 70 pitches) — allowed a leadoff walk to rightfielder Terrance Gore but then got 1st baseman Whit Merrifield to hit into a big double play grounder. He then walked fleet centerfielder Billy Hamilton, who stole second. With the tying run in scoring position, pitching coach Larry Rothschild went to the mound. It was clear shortstop Adalberto Mondesi was going to be CC’s last batter and chance for a win. Sabathia got Mondesi to pop the ball up to the outfield for a can-of-corn final out, and thus the chance at win #247.

Minutes later, in the bottom of the same inning (the 5th), Mike Tauchman led off with a homerun to give the Yanks and Sabathia breathing room, at 3-1.

Luis Cessa struggled thru the 6th — allowing a run on two hits, but got out of it with a 3-2 lead. It would have been worse if Gleyber Torres didn’t make a terrific barehanded play at shortstop for the 2nd out.

Then the Yankee offense added insurance runs in the 6th — a leadoff double by Aaron Judge, a walk to Luke Voit, an infield single by Gleyber Torres to load the bases with nobody out, and a sac fly by DJ LeMahieu scored a run and moved the runners up. Clint Frazier came up and walked to a wild pitch to make it 5-2 and that was essentially it.

Kyle Higashioka double to lead off the 8th, and scored when a Tyler Wade bunt single was thrown away.

The Yankee ballpen was lights’ out — Adam Ottavino, Tommy Kahnle, and Zack Britton each contributed a shutout inning.

In the 7th inning, Ottavino faced Terrance Gore — who both wear number 0 — making it the first time a zero met a zero in Yankee history. 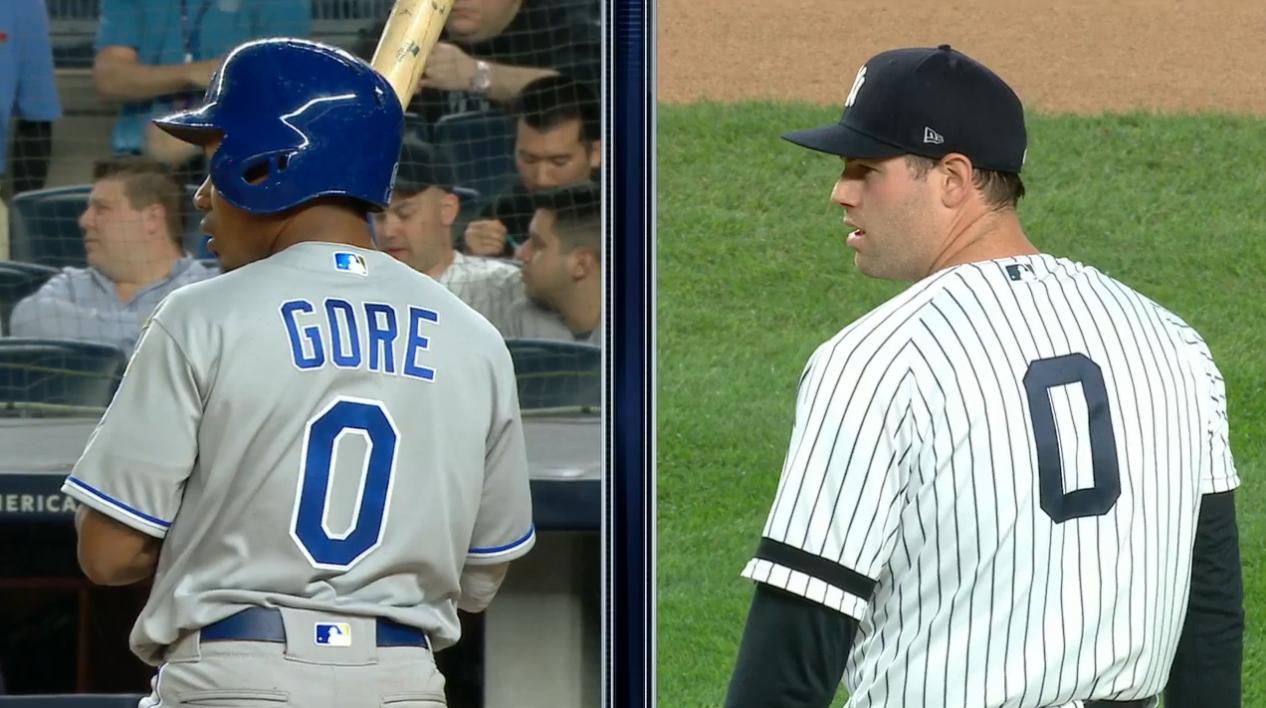