On Friday we wrote a post detailing 8 things the Yankees need to win a title. Yesterday the Yankees used 5 of 8 of them, namely:

Ingredient #1: Jacoby Ellsbury and Brett Gardner need to get red hot again at top of lineup. Both led off the game with singles — then both scored on a homerun (by Beltran) to put the Yanks ahead for good.

Ingredient #2: Someone needs to step up to become 4th good starting pitcher for Yanks (besides Masahiro Tanaka, Luis Severino, & CC Sabathia); first candidate would be Michael Pineda. Michael Pineda did step up — his slider slided; he struck out guys; he pitched a shutout into the 6th.

Ingredient #3: Dellin Betances to regain his confidence and control. Betances was dominant, striking out the first two batters he faced, then getting Yoenis Cespedes (now in an 0-17 slump) to ground out.

Ingredient #6a: Chase Headley needs to play Graig-Nettles defense. Headley made a Nettles play in the 2nd — diving to his right to snare a line drive down the line — then up and throwing a strike to Greg Bird to rob Daniel Murphy of a double and keep the Yankee lead at 3-0; a huge play at that point, and in general. You can win a title with Graig Nettles defense at 3rd (1978). In retrospect we should have broken out ingredient 6a into its own number.

Ingredient #7: Justin Wilson (and Chasen Shreve) need to be sharp; “Girardi will need to guide the ballpen to be on the top of their game.” Justin Wilson entered with 2 on and was filthy. The ump robbed Wilson of a strikeout of Murphy (calling two close pitches that looked like strikes, balls) so instead Murphy was on with a walk to load the bases. But then Wilson struck out David Wright, struck out Jose Uribe, and in the next inning struck out Wilmer Flores, and struck out Juan Lagares. Joe Girardi went to Caleb Cotham, who struck out Kevin Plawecki. Then in came Betances to strike out Kelly Johnson, and strike out Curtis Granderson. Girardi used James Pazos, Chris Martin, and Andrew Miller in the ninth (after Martin allowed two infield singles). In all — Yanks used 7 relievers who contributed to the shutout.

So the Yankees DIDN’T use three ingredients — #3 (ARod to stay hot — with no DH in the game, ARod got a pinch hitting appearance only), #4 (Mark Teixeira is still out; Greg Bird went 1-4; struck out 3 times), and #8 (no luck was needed, or unsuspecting plays by unsuspecting players; Slade Heathcott did not get up).

PS: the Mets wore their full home pinstripes and looked good from an aesthetic standpoint. On Friday we tweeted that “Mets would be better off scraping their goofy softball-uniform combos. Should just wear their full pinstripes @ home.” Met fan Eduardo Corrochio (@TheMatador86) agreed (see tweet below). So happy the Yankee management has kept the Yankee uniforms consistent through the years, and not fallen to the enticement of having many different uniform combos to sell more t-shirts/uniforms to fans. Mets should go this route going forward. 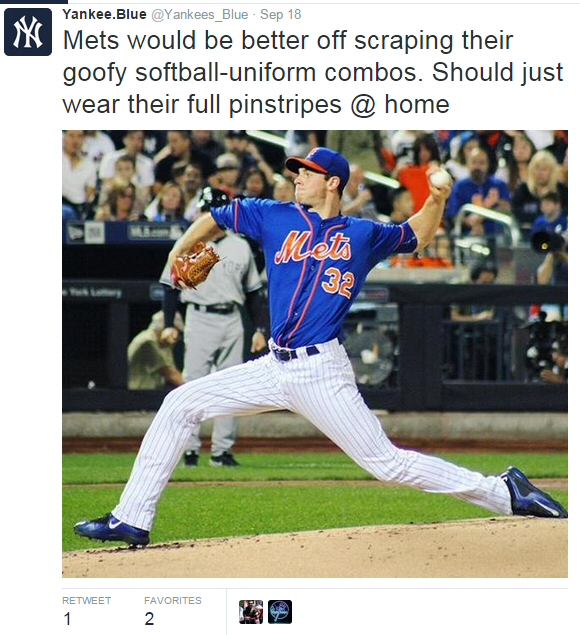 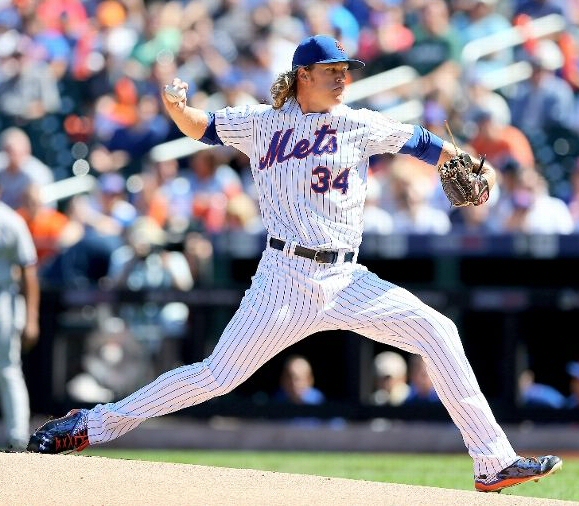 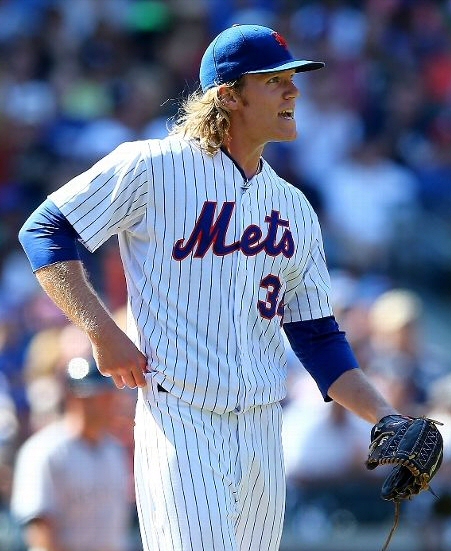