And the Yankee season falls on the back (and shoulder) of Michael Pineda. Whose recent performances have one looking up how Jesus Montero is doing, to see who got the better of the trade.

At least he is back in the Major Leagues. And apparently not on steroids anymore.

But needing to look up Montero’s average at all goes to show you the disappointment Yankee fans are feeling right now as to Michael Pineda‘s performance this year. Going in, the way he was pitching in the spring, it looked like a Steal of a Deal. Pineda was Brilliant early. There was the start where he was going for the all-time strikeout record — had 14 strikeouts by the 6th inning or something like that.

Then he started getting clobbered.  Then he’d pitch well. Then clobbered. We learned from the baseball announcers (Michael Kay and Suzyn Waldman both pointed it out almost simultaneously) that when Pineda’s slider wasn’t sliding, he was dead meat. And you could find this out in the first two innings — if he was striking out a lot of guys, his slider was sliding and he’d be great. And if he didn’t strike out anyone, he’d be out of the game by the 4th.

Then came shoulder discomfort and the DL. Since coming back, he has been.. inconsistent. Sometimes he’s good; sometimes he gets lit up. 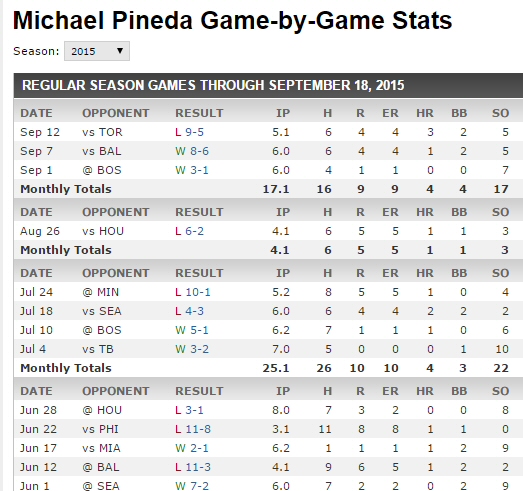 Pineda vs The Viking

Today Pineda goes against Noah Syndergaard and the NY Mets. Syndergaard looks like a Viking (long blond hair and blue eyes) and pitches lights out, all the time lately. The Mets and Sandy Alderson got him from the Blue Jays for R.A. Dickey. Steal of a deal. Even if Dickey is doing well, he is 40 years old.

As a Yankee fan I’m hoping Pineda strikes out the side in the first inning.