Having a great centerfielder is the wish of every baseball fan. Especially Yankee fans — who have a tradition of Joe DiMaggio followed by Mickey Mantle to measure centerfielders against. In the 1970’s Bobby Murcer was to be the next Mantle and was a multi-time all-star who almost won a batting title and a homerun title. Then came Elliott Maddox, Mickey Rivers, the 1980’s, and finally Bernie Williams, who won a batting title and helped the Yanks to 4 titles with his clutch switch-hitting power bat (and 4 gold gloves).

After Bernie Williams — I forgot who we had in centerfield — but now we have Aaron Hicks — the 2nd best Centerfielder in the American League (the best one being the guy the Yankees almost drafted, Mike Trout).

Hicks Is a 5-Tool Player

Hicks as Yankee fans all know — was an elite 5-tool prospect for Minnesota, who they gave up on after a few low-batting-average initial seasons. Hicks plays great Defense in center, has a STRONG throwing arm (the one thing Bernie Williams always lacked), hits for power, and has a high on-base average despite a batting average that settles in the .245 area.

And he’s becoming clutcher and clutcher. In yesterday’s game against Baltimore for example, he hit a homerun to put the Yanks ahead, and a double to win the game in an extra inning walkoff. He gets big walks — sporting that On Base Percentage (OBP) in the .360’s all year.

“I mean, Aaron, when you really peel the curtain back, he’s a great player,” Yankees manager Aaron Boone said. “And it’s been exciting to see him evolve as one of the really good players in this league. His control of the strike zone is about as good as there is out there.” 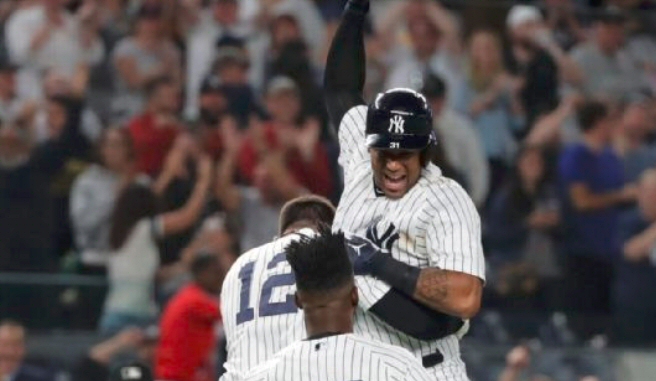 Amongst American League centerfielders, Hicks is:

And of course he’s got gold-glove level defense with a great arm.