Avant-garde is from the French — meaning Advance Guard. The Miami Marlins hat looks like something Jim Bouton would be embarrassed to wear in Ball Four. Poor David Phelps all he did was his job when he was a Yankee — long relief, starts, short relief, whatever duty the Yankees pressed him in he did his job. Surprising fastball he struck out a bunch of guys. More strikeouts than innings pitched he always kept the Yankees in the game. He was from the system. He was a Yankee thru-and-thru. For all we know, he bled Yankee blue. 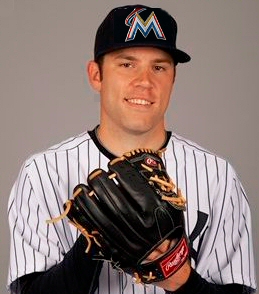 But he’s gone now for a guy who is supposed to have one of the fastest fastballs in baseball — he goes by the name Nathan Eovaldi. Despite his supposed super-fast fastball he’s been a failure in the major leagues — the opposite of Phelps. The Dodgers gave up on Eovaldi after he went 6-21 there; the Marlins took a chance but after leading the MAJOR LEAGUES IN HITS ALLOWED last year (223 hits in 199 innings) — you can imagine fan reaction to THAT if he did it in the Bronx — the Marlins enticed the Yanks to take him and his upside off their hands. His record last year with Miami? 6-14.
Peter Gammons is on tweeter tonight saying “Very smart bball man believes Nate Eovaldi’s best role eventually is big time power closer”. Perhaps another Lindy McDaniel. We hope so!