The list of Yankees who have had superstar Wins Above Replacement (WAR) of 8.0 or higher in season (note that Aaron Judge had 7.9 in 2017):

WAR is the best of the modern advanced analytics — it does what fans always did verbally — such-and-such player’s offensive numbers have to be viewed compared to the position he plays, and the defense he plays at that position has to be added into his overall value.

So for example, people gig Graig Nettles for his career .248 batting average when considering him for the Hall of Fame, disregarding the dead-ball 1970’s era that he played in, and his phenomenal defense at that position, and the fact that he STILL holds the American League record for home runs by a 3rd baseman (and the fact he and George Brett were the best two 3rd basemen in the American League throughout the 70’s). WAR takes that all into account — and Nettles 8.0 WAR in his MVP year 1976 pops out.

Where Are the Catchers?

As Sean Shilinsky noted on Twitter, “Bill Dickey is the most underrated Yankee ever, you could actually make a solid case that he is a better catcher then Yogi Berra.” Which brings to mind: Where are the Catchers?? Hall of Fame catcher Bill Dickey‘s single season high for WAR was 6.7 in 1937; Hall of Fame catcher Yogi Berra‘s single-season high for WAR was 6.2 in 1956. This despite him winning 3 MVP’s in the 1950’s. Thurman Munson had an all-time high of 7.2 in his MVP 1976 season. WAR is supposed to be position neutral. Is there a hole in the algorithm that prejudices against catchers?

We asked Sean Forman, founder and CEO of Baseball-Reference.com, and he said: “Maybe but it’s because they play fewer innings than non catchers.”

Other Things that Pop Out

Bobby Murcer. As Ted Williams said of Murcer in 1972, he had the best chance of being the next player to win the Triple Crown, because Murcer was dueling for batting titles and home run titles in an era of the dead ball. Murcer’s 33 homers in 1972 would have led the league the year before (1971, Bill Melton led with 31) or after (1973, Reggie Jackson led with 32) but Murcer unfortunately finished 2nd to Dick Allen (36) in 1972. And Murcer just missed the batting title in 1971 (he batted .331 to Tony Oliva‘s .337). If Murcer gets those two titles and if Baltimore doesn’t win its last 9 in a row (and go 16-2 down stretch) in 1974, and Yanks go deep in those playoffs — Murcer gets remembered differently?

Derek Jeter only had one year of an 8.0 WAR but Snuffy Stirnweiss had two?? The reason was Stirnweiss had his best two seasons during the War, and was facing essentially minor league pitchers. As we pointed out in an article on Yanks to lead league in Total Bases, Stirnweiss was a reserve who became a starter because of the war, and once the war ended he went back to being a reserve. And he met with a horrible early death in a train crash.

Clearly Babe Ruth and Lou Gehrig jump out with their MASSIVE WAR’s. “Gehrig and Ruth a class onto themselves”, notes John Snyder. “Truly. I remember Shohei Ohtani being compared to Ruth. Talk about an unfair comparison.” 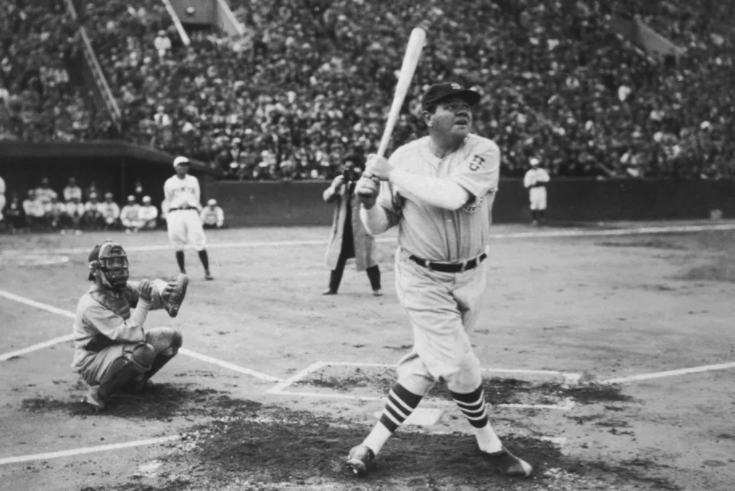 What About the “Say Hey Kid” & Other Superstars?

Was he that much better than Mantle or was is that the National League didn’t have as many good outfielders in the 1950’s as the American?

And finally we have steroid Barry Bonds. With and without steroids, Bonds had:

The photo at top of this article is courtesy https://twitter.com/Jamesyankee. Follow James Michael (@JamesYankee) for terrific old-time Yankee photos.