So even though at first blanch you’d say Harold Baines was never a difference maker or elite All Star that carried his team to a title, or was considered one of the elite players in the game — let’s take a look at the list — and looky there — Harold Baines #20. Of the thousands upon thousands of players to play in the Majors, and the millions who tried to make it — he’s #20 in games played in MLB. It is impressive.

Players in yellow below are in the Hall — and below this list, we’ll examine those not in Yellow. 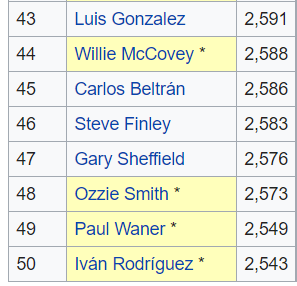 The only ones not in are:

Gamblers and People Who Fixed the Scores of Baseball Games

It is all so clear to me now I don’t know why I didn’t think of this formula (Top 50 players in All Time Games Played should be in Hall) sooner.

And why are HOF voters pissing on Le Grande Orange? Rumors that he was gay?

It gets worse when you see how the above players like Nettles, Staub, and the Evans non-brothers stand out against the field — let’s look at numbers 51 to 72 All Time — features some BIG NAMES (like Babe Ruth)! 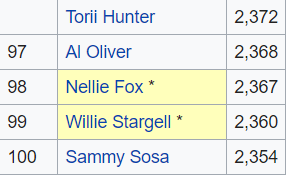 There are some guys in the 50-100 list who provide some weakness to the formula — like Ron Fairly specifically. But look who is poetically #100 — Sammy Sosa. I thought Lou Whitaker WAS in the Hall of Fame.

Bill Dahlen played in the 1800’s and when you google search him, Bill Dahlen Hall of Fame automatically pops up meaning it probably has been under discussion.