Yesterday’s Yankee game ended with fans in the right-field bleachers throwing food onto the field and/or at the Cleveland (formerly Indians) Guardian outfielders in celebration of the Yankee come-from-behind win.

John Sterling on the radio called the fans Hooligans, and Yankee fans started trending on Twitter.

This has caused numerous conversations and even arguments amongst Yankee fans as to whether the actions should be completely condemned or taken in context, if Cleveland started it or not, and if there is a fine line where it is ok to throw food onto the field.

Here is the play and Sterling’s call:

IT IS A BASE HIT! ROUNDING THIRD, SCORING KINER-FALEFA! AND THE YANKEES WIN THE BALLGAME WITH TWO IN THE BOTTOM OF THE NINTH

Here’s another view of Sterling’s call:

There was condemnation of Yankee fans all across Twitter.

The event began on the play before, when, with the Yankees down 4-3 in the bottom of the 9th, a runner on 2nd, 2 outs, and 2 strikes, Isiah Kiner-Falefa doubled off the wall in left to tie the game. Cleveland outfielder Steven Kwan tried to catch the ball that went over his head, and banged into the left field wall, falling down.

As he lay on the ground, apparently some fans heckled him in the left field bleachers, causing Cleveland centerfielder Myles Straw to climb the wall to confront the fans. 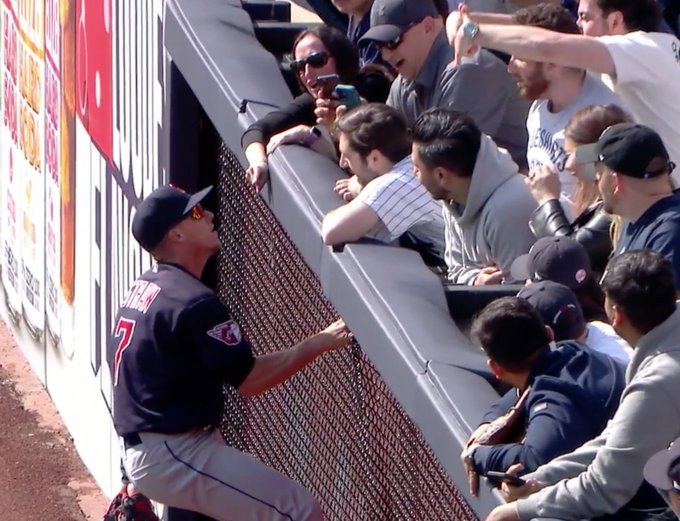 Another view of Straw: 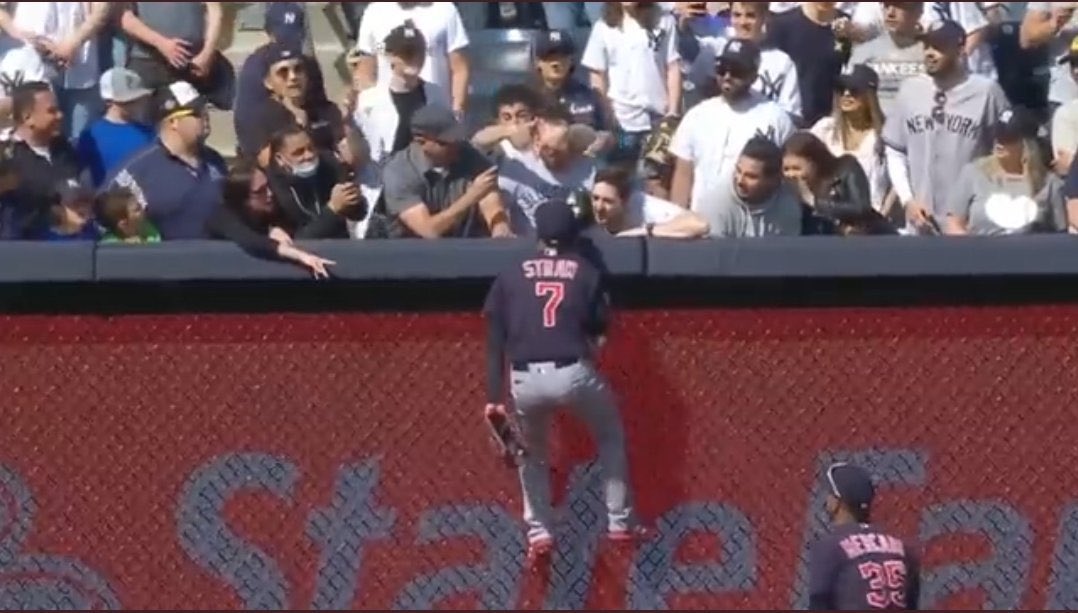 Video from The Barn has Spoken:

When the next batter, Gleyber Torres, ripped a hit to right centerfield to win the game, the fans in right center threw their beer onto the field and/or at Straw, and right fielder Oscar Mercado got some of the collateral damage. Mercado caught some of the food and confronted the fans, who threw more.

New York Yankees fans are the epitome of class pic.twitter.com/hy0UGpLxzS

Said Yankee 1st baseman Anthony Rizzo afterwards, “We’re all athletes and we’re all in a fraternity together… Our fans are passionate, they bring the noise every night and we appreciate that. When beers start flying, you just want to get everyone under control as best as you can so things don’t escalate.”

Some Yankee fans pointed out that:

In the 1970’s fans used to throw their soda, beer, and any food stuffs they had on the bullpen car as it brought in a reliever from the other team. It was considered a friendly Yankee Stadium greeting.

This was the time of “Animal House” and who could turn down a good old fashioned food fight — a one-way fight really but the player was protected inside the bullpen car, which would have its windshield wipers going. 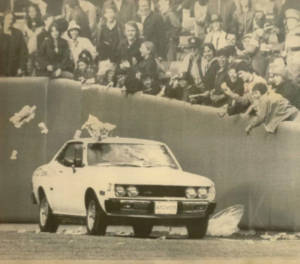 As with any subject that invites or invokes debate — there is a fine line that gets pushed back and forth and crossed.

The line seems clear that one should never throw their beer at a player on the field — or anything else. Dave Parker of the Pirates once got hit with a battery playing the outfield in Pittsburgh (his home field) in 1983 after he had made an error allowing Philly to score a run earlier in the game. He said at the time it was the third time he had been hit with something — during the 1979 and 1980 seasons, after he had signed a 5-year, multimillion-dollar contract, spectators threw at various times a bat, a steel valve and a 5-pound sack of nuts and bolts at him.

In the late 1970’s fans were throwing smoke bombs and M-80 fireworks onto the field of Yankee-Boston games.

There is a famous picture in Sports Illustrated of Mickey Rivers peering through the smoke in centerfield during the 1978 World Series. Yankee Stadium intimidated the Los Angeles Dodgers so much in the 1978 Series, Dodger players like shortstop Bill Russell said they could not wait to get out of the Bronx. The Stadium was so LOUD, said Russell, it contributed to the Dodger losses.

Here is something from Sports Illustrated’s vault on the 1978 World Series:

“A smoke bomb is tossed onto center field, and a green cloud envelops Mickey Rivers, who curiously does not budge, thereby creating the suspicion that he moves only when instructed to do so by the Yankee walkie-talkie operatives responsible for positioning outfielders. Dodger bullpen inhabitants are bombarded with refuse, rubber balls, even whiskey bottles. And when Chris Chambliss flies to center to end the game, Reggie Smith is struck on the head with a rubber ball apparently pitched from the upper deck in right field. He leaves the battlefield hurt and dazed. It is an ugly show.”

But throwing stuff on the field did not end in the 1970’s. Papa_Cole45 on Twitter offered up this picture of Cleveland fans recently throwing bottles — probably, hopefully plastic bottles — onto the field of a football game: 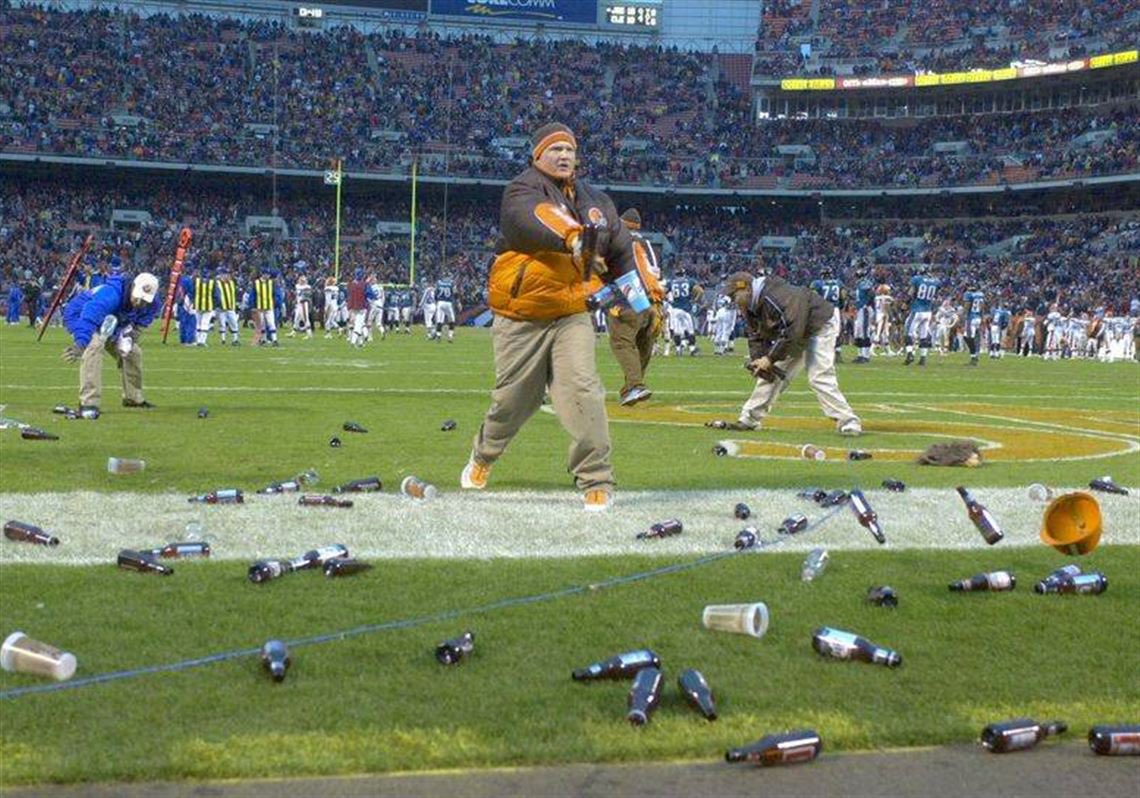 The Italians are famous for throwing pennies at opera tenors who miss a high C in La Scala or other opera houses in Italy. For decades. It is a part of Opera lore.

Throwing Food at Other Fans

In the 1970’s all of Yankee Stadium was an Animal House, as was Shea, and probably every stadium. At one game I attended, there were 3 older teenagers several rows in front of us, sitting in the upper deck, who were casually chucking their food out over the deck in front of us hitting whomever in the level below.

In about the 5th inning, a big burly guy in his 40’s came over to one of the teenagers who had just thrown something overboard, and smashed a sandwich into his face — all the time telling him he had just hit him and his family below. He smashed that sandwich into his face for about 30 seconds. His face was RED mad. He was outnumbered by the 3 teenagers but no one was going to mess with him.

Walking outside Shea Stadium you had to dodge people occasionally tossing their soda over the side from an upper deck. My friend John Mirabello’s sister Peggy reported she almost got hit by one once. Shea and Yankee Stadiums were War Zones in the 1970’s.

It all changed during the 1980 World Series, when Philadelphia employed armed guards and security dogs all around the Stadium. It was the turning point where MLB teams started to employ security guards in force at MLB games.

The Yankees have been marketing the Bleacher Creatures for years. Can the management now get on a high horse and say Bleacher Creatures should be rude, insulting, fight-instigating, rough, dirty, nasty, intimidating to the other team, etc — but never throw their beer onto the field — even if provoked by another team’s outfielder?

While it is clear one should never ever throw anything at a player while they are on the field — especially a battery or sack of bolts — some questions arise: