Wandy Peralta made an out on Jake Cave at 1st base in the 8th inning, but the ump called Cave safe and the ensuing Yankee challenge failed — even though videos appeared to show Cave was out. It gave Minnesota life in the inning and with 2 outs, Carlos Correa hit a 2-run homer off Greg Weissert — the eventual game winner.

But the umps weren’t done.

The Yankees loaded the bases in the bottom of the 9th with 1 out, and Gleyber Torres took 2 pitches for balls, then took 2 pitches that stat cast showed were outside the strike zone and should have been balls 3 and 4 — but the home plate ump called them strikes. Gleyber struck out swinging on a 2-2 pitch.

That finished the Yanks off as Isiah Kiner-Falefa grounded out for the ballgame.

1. Miggy Puts Yanks on Board

Miguel Andujar was back with the Yankees with so many injured: DJ LeMahieu was recently placed on the IL, Josh Donaldson is out on Paternity Leave, and not to mention Matt Carpenter and Anthony Rizzo out as well.

Andujar was the DH with Isiah Kiner-Falefa at 3rd.

The Yankees were up against old friend Sonny Gray (7-4 3.10 coming in), and in the 2nd, Kiner-Falefa walked and Andujar smoked the ball just over the left field wall for a 2-0 Yankee lead.

“It was good to see him get the ball in the air like that, and obviously hit one out of the ballpark, in a sac fly situation, where I feel like he was really focused on getting the ball in the air,” said manager Aaron Boone afterwards about Andujar. “I liked his aggression in that situation. Then got the infield hit, where he caught it off the end of the bat. Then smoked the ball when he lined out. And then a really tough at bat against Lopez, who is tough against righties, and I thought he put together a really good at bat to give us a chance there. So that was good to see.”

Meanwhile Nestor Cortes Jr was back from his stay on the IL due to a groin pull. He was under a pitch limit — and threw a perfect game into the 5th. He was coming out after 5 innings regardless, but in the 5th old friend Gio Urshela led off with a single and old friend Gary Sanchez doubled him home for a 2-1 game and Cortes was lifted.

Clarke Schmidt came in and retired the side but not before walking a batter and allowing a game-tying, ‘seeing eye’ single to Nick Gordon.

Then to the 8th — the umpire-gyping inning.

Wandy Peralta struck out the 1st batter, then got Cave to ground to 1st — Marwin Gonzalez throwing the ball to Wandy covering — but Wandy missed the bag momentarily then quickly touched the bag again — causing the ump to think Cave had beat it out.

To see the play — watch the end of the video here.

Wandy struck out the next batter which should have been the 3rd out — but it was only the 2nd.

Greg Weissert was brought in to pitch to Correa. Weissert had gotten Correa to pop out in a huge situation the night before — in the 12th with bases loaded and 1 out.

The Yanks rallied in the bottom of the 8th against reliever Jorge Lopez:

Miguel Andujar worked the count 3-2, then took ball 4 as the ball got by Gary Sanchez for a passed ball — Aaron Judge scoring from 3rd.

A massive amount of fans on Yankee Twitter thanked Gary for the ‘one for old times.’ 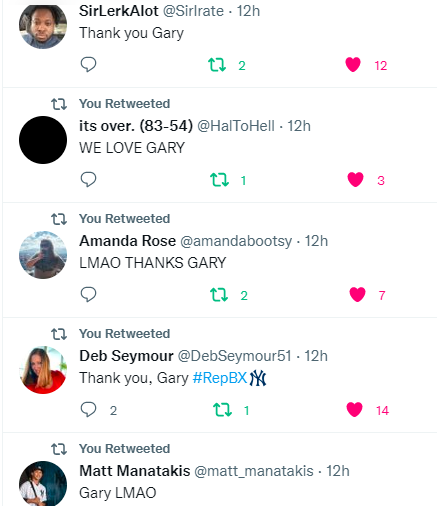 Minnesota brought in Caleb Thielbar to pitch and the Yankees brought in Giancarlo Stanton to pinch hit. Stanton worked a 9-pitch at bat before striking out.

Then to the bottom of the 9th — the Yankees loading the bases on a 1-out single by Oswald Peraza, double by Aaron Hicks (against Michael Fulmer who was brought in), and intentional walk to Aaron Judge.

At 2-2, Gleyber struck out swinging.

You guys just get worse and worse every year, for every team @MLBUA pic.twitter.com/hSUzlEIvjc 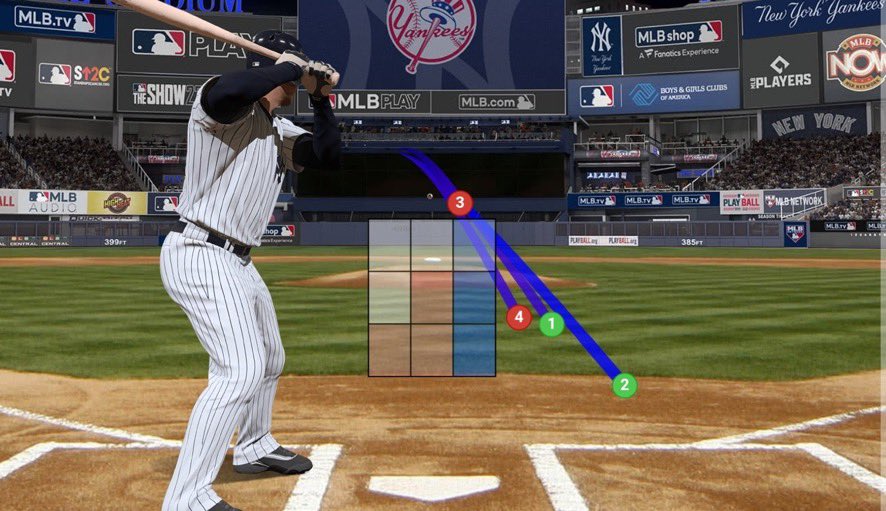 Not a strike. Robot Umpires. pic.twitter.com/MpyMsJOCHW 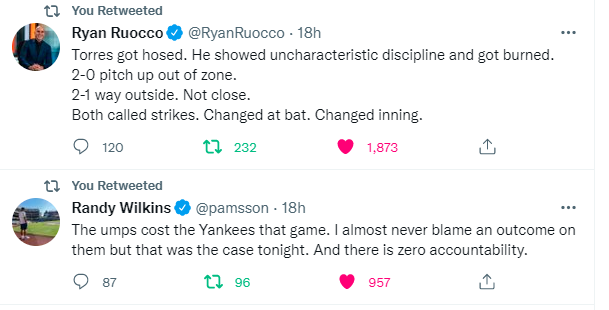 With 2 outs, bases loaded, Isiah Kiner-Falefa hit a grounder to 2nd, and was barely out at 1st by a step for the old ballgame.