The Yankees picked up where they left off the day before, scoring a ton of runs in the first 2 innings in pummeling the Tampa Bay Devil Rays 10-4 on a Sunday afternoon at Yankee Stadium.

Gleyber Torres led the attack with 2 homers in the first 2 innings.

“After the 1st game we lost, we had a bunch of meetings, and tried to figure out the adjustments as hitters — especially against those guys — who are pitching well,” said Torres afterwards. “And I think we did a really good job. Everybody is talking during the game in the dugout. We took that approach and we did damage.”

The game had a 2-hour delayed start due to rain — and Yankee fans thrown off by the time change, or by the beginning of the football season with the NY Giants playing their first game — and checking the score at about 3:45 pm — were treated to a 10-1 Yankee lead in the 2nd inning.

The Yanks won on Saturday, 10-3. The difference this time was the Yankees threw their bullpen at Tampa — Domingo German started but was scheduled to pitch only 1 inning on short rest, and then the Yankees trotted out 7 relievers to tame Tampa’s offense.

Also Saturday was a beautiful Sunny day, and this game on Sunday was a rainy day — the game delayed the 2 hours and played through a threatening rainy mist throughout.

It was September 11th and before the game the Yankees held a ceremony remembering the fallen on that horrific day. Domingo German, the starting pitcher, walked an American flag out to centerfield. 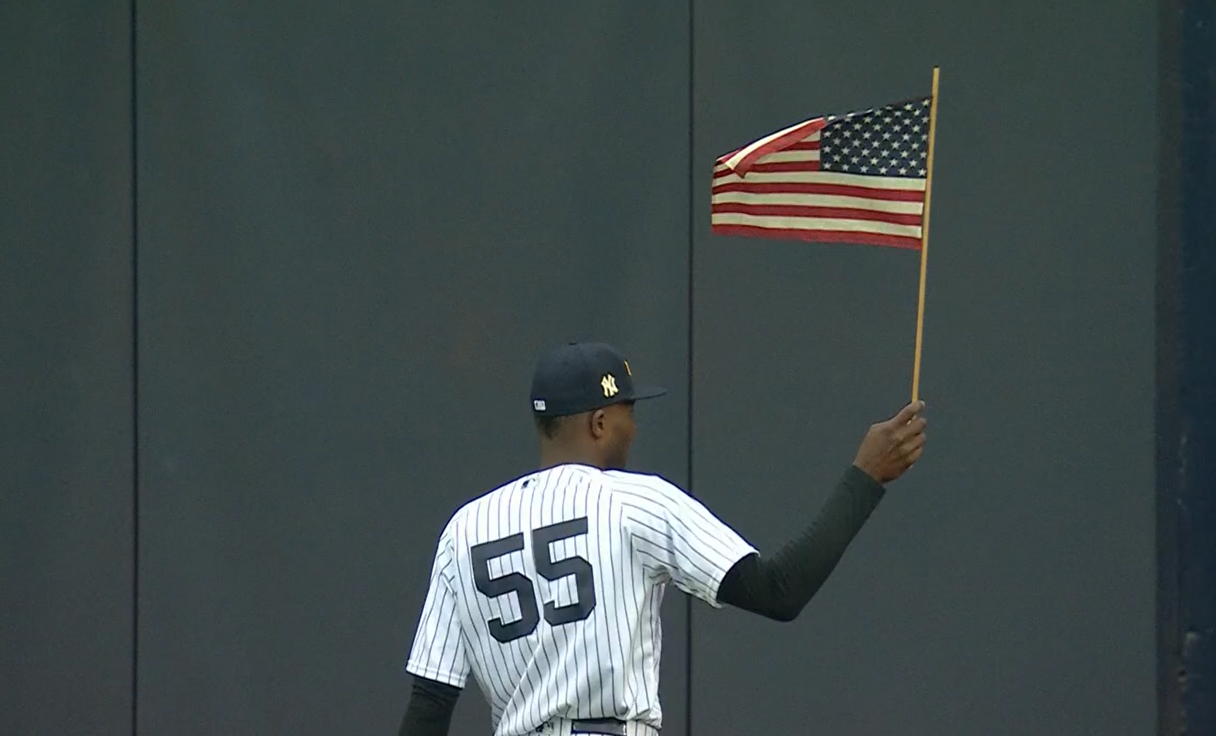 “Twenty one years ago, when this tragic event happened in NYC I was 9 years old — I was watching baseball with my grand dad, and I remember seeing Sammy Sosa running out there with the flag,” said Domingo German afterwards through a translator about carrying the flag to centerfield. “I took it as a way to show support to the country, to the people, to the victims. Today I felt it was a good way to replicate that, and show that the horrific event is still remembered and close to your heart.”

The Yanks were up against Luis Patino, a 22-yr-old, 6’1 righty who came in at 1-1 4.34. But more than that, Pitino was the key prospect that Tampa acquired from San Diego before the 2021 season in the Blake Snell deal — regarded as one of best pitching prospects in baseball. There were articles at start of the 2021 season saying Pitino would add to the Tampa starting staff and make them lights out. It hasn’t happened yet.

Aaron Judge led off the bottom of the 1st with a single, Giancarlo Stanton walked, and Gleyber Torres ripped a 391-foot homer to opposite field right for a 3-0 Yankee lead.

Domingo German had pitched the top of the 1st — a shutout inning after allowing a leadoff walk — but was gone at the top of the second — he had simply been the Opener although the Yanks had not announced him as such before the game.

Lucas Luetge — came in and got 2 outs amongst 2 singles and was relieved by Greg Weissert, who allowed a bloop single to right for a run and 3-1 game before getting the final out. This all left Yankee Twitter concerned and confused about why German had to be taken out after only 1 inning. And there was some cussing.

But in the bottom of the 2nd, the Yankee batters made it a mute point — blowing the game wide open.

Pitino walked Isiah Kiner-Falefa and Kyle Higashioka to lead off the inning, then allowed a single to Marwin Gonzalez to load the bases.

Aaron Judge hit a sac fly to center to make it 4-1 NY, and Giancarlo Stanton followed with a 365-foot homer to right. NY 7 Tampa 1.

Gleyber Torres went back-to-back with Giancarlo — getting under it and hitting a Moon Shot to left — Gleyber’s 2nd homerun in 2 innings.

4. Yank Bullpen Does the Job

And that was it for the Yankee offense. Jalen Beeks pitched a shutout inning and then Ryan Yarbrough pitched 5 innings of 2-hit, shutout ball.

Ron Marinaccio got into a little trouble in the 6th — allowing a double and a single to score 2 runs (an inherited Lou Trivino runner) — but then Marinaccio struck out the last 2 batters he faced.

Clarke Schmidt pitched 2 shutout innings — the 7th and 8th. It is good to see him back in the Michael King role.

And Clay Holmes pitched a so-so 9th — walking the leadoff batter and allowing a 1-out RBI single, but striking out 2 and getting the final out on a lineout to Estevan Florial in center for the old ballgame.