The Yankees came so close to winning this game. Justin Wilson struck out Robbie Grossman — final batter of the game — and the Yankees won in 10 innings, 3-2. But no — the umpire called what looked like the final strike — a ball. And on the next pitch, Robbie Grossman hit a homerun to right field, just over the fence. Ballgame Tigers.

As The Short Porch covered:

This was not called a strike and would have ended the game… unreal pic.twitter.com/Z96NkBWi6z

Gerrit Cole pitched 6 innings of 1 run baseball. He allowed 3 straight singles after 1 was out in the 3rd for a run, but then got a double play to end the inning and pitched shutout ball the next 3 innings.

Cole struck out 5, walked 1, and allowed 6 hits. He didn’t have his best stuff, but turned in a good start nonetheless.

Mize is not apparently related to Johnny Mize — the all-time great NY Giants hitter; although the two share a facial resemblance, aka they look alike. 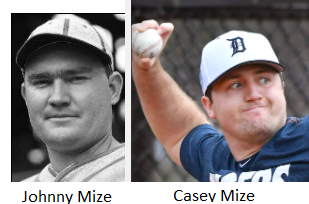 Lost in the wind was a Gio Urshela groundout to 3rd with 1 out in the 8th off Michael Fulmer, where it looked like Gio was safe at 1st. The next two batters — Gleyber Torres and Odor — singled before the final out was made.

The Yankees put a runner on 3rd in the 9th with only 1 out — Miguel Andujar singled, and Tyler Wade ran for him — getting to 2nd and then to 3rd on two wild pitches by Gregory Soto.

Giancarlo Stanton stepped up — a sac fly would put the Yanks ahead. But Stanton struck out for the 2nd out, and Aaron Judge ended the inning by striking out.

It was Giancarlo Stanton‘s first game back after a stay on the 10-day IL. He went 0-5 and struck out 4 times.

The Yanks placed Aaron Judge on 2nd to start the 10th (crazy COVID rules) and he came around to score on a wild pitch — putting NY in position to win if Justin Wilson could have gotten that final call (above).

Wilson did a good job initially in the bottom of the 10th, getting a short flyout to not advance the runner, and then a groundout. And then apparently struck out Grossman for the Yank win but no…