Michael Wacha pitched 6 innings of 1-hit shutout ball, striking out 9 and walking 1, and the Yankee bullpen and defense could not keep up, sending the Yanks to a crushing 8-2 defeat at Yankee Stadium on a chilly, stormy-sky, 55-degrees with a few sprinkles Friday evening.

Reasons why final score was 8-2 Tampa:

Michael Wacha was brilliant through the 6 innings he pitched. He had you scrambling to examine his career record. This is the same Wacha who stunk with the Mets last year, but was a good starter for 7 years with St Louis.

Wacha a Former All Star

It says, “As both a play on his last name, and the pronunciation of his first and last names together, “Wacha Wacha” became a phenomenon in 2013 following the favorite catch phrase of Fozzie Bear of The Muppets, and for its similarity to the sound effects from the Pac-Man arcade game.”

“A restaurant in St. Louis named a milkshake the “Wacha Wacha” following his 2013 NLCS MVP honors. The milkshake’s ingredients included vanilla with chocolate chips and Cracker Jacks. Although he could not remember the name of the restaurant (believed to be Fozzie’s), he stated the Cracker Jacks “added a little baseball flair to it.”

With the score 8-0 by the time I was reading Wacha’s Wikipedia page, I went down the rabbit hole further to examine the history of Cracker Jacks. 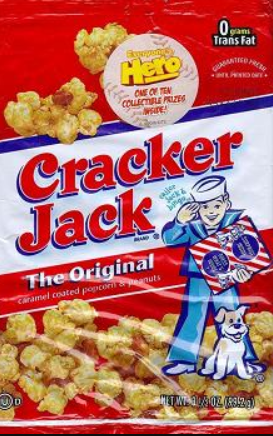 Cracker Jacks — or Cracker Jack as the label says — was first sold in 1896, and there are two ‘legends’ of who invented it. Salt covered popcorn and peanuts mix dates back further than that — the Cracker Jacks wikipedia page says “page 4 of the Friday, August 23, 1867, edition of the Evening Star newspaper published in Washington, D. C. contains the notice: The Nantucket Inquirer and Mirror says, “Peanuts and Popcorn were not mixed up with piety when we first knew camp meetings, nor cigar smoking nor Psalm singing. But the times are changed and we with them.”

You can imagine what life was like back in the late 1800’s — camping out with cigars and singing Psalms — and that being a very modern thing to do.

At about this time with the score still 8-0 I turned on the Knick game that started at 9:30 pm due to it being in Dallas.

2. Boone Fakes Himself Out Starting Nelson

It was bullpen day for the Yanks — and Aaron Boone started reliever Nick Nelson, oddly over Michael King who is a starter and pitched 6 innings of 1 hit shutout ball his last time out — exactly the same as what Wacha did on this evening.

Nelson has great stuff — Boone gushed about it in the spring — a 98 MPH heater with movement. But sometimes the heater doesn’t move and Nelson got hit in this game — 2 runs in the first on a leadoff walk to Austin Meadows, a double by rightfielder Randy Arozarena and a double by DH Brad Lowe — the first three batters Nelson faced. Nelson settled down to strike out 2 of the last 3 batters he faced but damage was done.

In the 2nd, Michael King came in and pitched 3 solid innings of shutout ball, striking out 4 and allowing only 2 hits. He was at 69 pitches but Boone took him out and brought in Luis Cessa to start the 5th.

Cessa allowed an infield single then a double to 2nd baseman Mike Brosseau to make it 3-0 Tampa.

That’s where the Yankee terrible Defense took over. Willy Adames hit a grounder to 3rd but Urshela made a throwing error to 1st allowing Brosseau to score and make it 4-0. Cessa walked two to load the bases but then got a tailor-made double play to shortstop to end the inning — Gleyber Torres flipped it to Rougned Odor who — threw the ball away. Two more runs came across and it was 6-0 and ballgame. Odor had made an error earlier in the game. They picked him up for defense.

After that Lucas Luetge was thrown in and gave up singles to the first 3 batters he faced loading the bases with nobody out in the top of the 6th. He almost got out of it too — a groundout/forceout at home and a popup made it 2 outs bases loaded, before catcher Mike Zurino doubled in 2 to make it 8-0.

Luetge settled down after that with 3 scoreless innings. He ended up pitching 4 innings on only 52 pitches — which helped the bullpen. He allowed the 2 runs.

Giancarlo Stanton hit a MASSIVE opposite field homer to right off Trevor Richards in the 7th to make it 8-2.

Giancarlo Stanton takes one the opposite way to put the Yankees on the board with a two-run home run. #YANKSonYES

Watch on YES and stream it LIVE with the YES app: https://t.co/0cgHA8Q6LU pic.twitter.com/H0qJITBZcU

With Wacha gone the Yanks outscored Tampa 2-0 in the final 3 innings. #Sarcasm. The Yanks got 3 hits on the day — Stanton, Urshela, and Torres.

With the loss the Yankees have the worst record in the American League at 5-8. Incredibly all other teams are 6-8 or better. In any case it is April 17 and that means it’s really early. Still hanging on  to the 105 win prediction and ps: was a great sign that Michael King pitched really well again.