It’s hard to blame the umps for a 9-2 loss. But there you have it — the 9-2 loss to Tampa might have been quite different had the umps done a better job, in the eyes of Yankee fans, the media, and the players.

The loss, on a Thursday afternoon at The Stadium, caused a 2-2 split in the 4-game series; the Yanks fell back to 4.5 behind 1st place Tampa.

1. Started Out So Well

It all started out so well — the game looked like it might be rained out but the weather forecast changed to be rain in the morning, sun breaking out from clouds in the afternoon, and heavy thunderstorms in the evening. So they played with Gerrit Cole going against Tampa reliever-turned-starter Ryan Yarbrough.

And Brett Gardner hit a homer in the 3rd to give NY and Cole a 1-0 lead. It looked like it was going to be a very good day.

The 1st Gardy Party of the year 🥳 pic.twitter.com/rnqODB7I2O

But in the top of the 4th, Cole struck out Brandon Lowe on a 3-2 pitch that the statcast replay showed to be a strike, but the ump called a ball — so instead Lowe walked. Austin Meadows then hit a 2-run homer and Tampa took a 2-1 lead.

In the bottom of the 4th, Aaron Judge led off with a single and Gio Urshela doubled to put 2nd and 3rd, nobody out.

Rougned Odor hit a long pop up to foul territory in right that did not get the runner in — in fact good thing Judge didn’t try because Manuel Margot caught it and rifled a strike home.

With one out, Clint Frazier took a 2-1 pitch that was clearly outside — but called a strike. Then on a 3-2 pitch he took another outside pitch in the same area also called a strike. Frazier should have walked but he was called out on strikes. It killed the rally.

“Lowe’s 3-2 was a strike and the four called strikes to Yanks were all in the same area, but clearly outside..”, said Yankee fan Jon Sliga on Twitter.

4. Ump Robs Yanks on Baserunning Out

In the top of the 5th, Cole walked Mike Zunino but struck out Taylor Walls.

Kevin Kiermaier hit a nibbler toward 1st that DJ LeMahieu made the play on and went over to tag Kiermaier running down the line to 1st — but Kiermaier clearly ran out of the basepaths, avoiding the tag. Yet the ump did not call it. 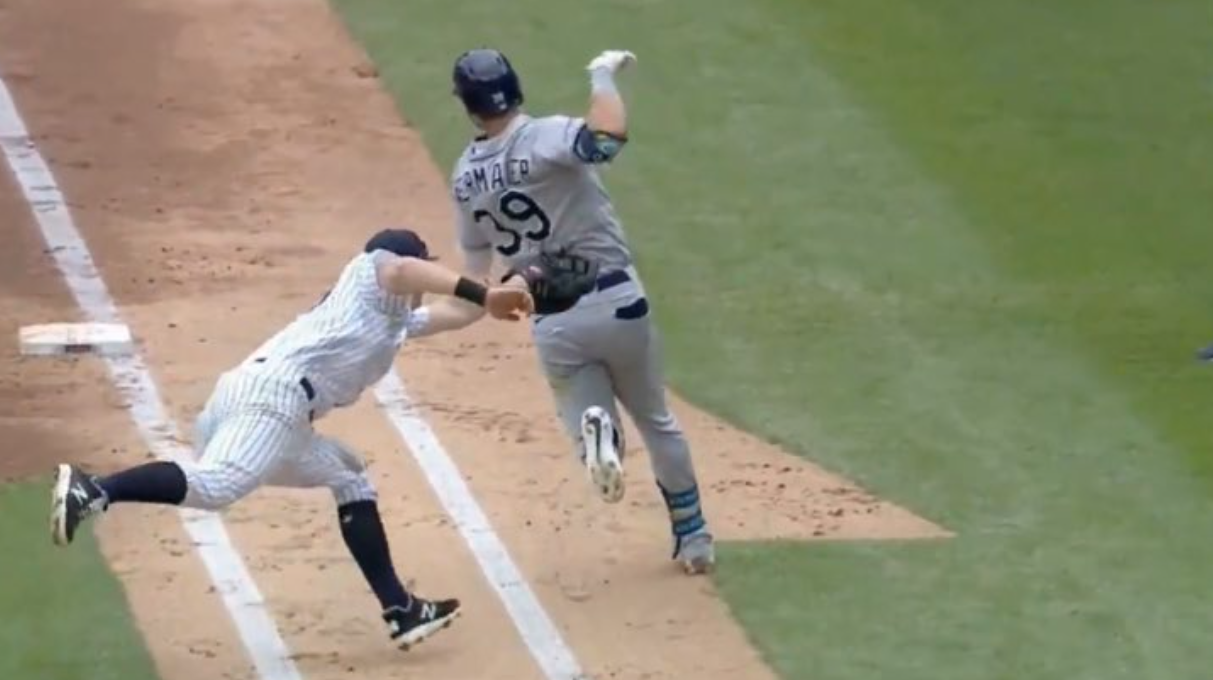 It was not a reviewable play.

Instead of 2 outs, a runner on 2nd, it was 2 on and only 1 out. Cole struck out Randy Arozarena but with two outs, pitching out of the stretch, yielded two straight singles to Lowe and Yandy Diaz for 3 runs and ballgame — Tampa 5 NY 1.

Rational Yankee Fan saw it this way: “Kiermaier with two feet out of the baseline to avoid the tag and he’s called safe. Umpire was standing right in front of the play. What are we doing here?”

Aaron Boone was ejected for telling the umps off. Afterwards both he and Cole, when asked about the bad ump calls, seemed to bite their lip while taking the high road. Said Boone: “I thought there were some close pitches that didn’t go (Cole’s) way.”

And then Nick Nelson came in and brought his gasoline. He pitched a scoreless 6th but in the 7th allowed 4 runs (single, walk, walk, double, single) to make it 9-1 Tampa.

If all that doesn’t happen with the ump above, maybe Nelson never comes in or gets lifted much sooner than allowing him to blow up the game in the 7th.

Funny how a couple of calls can turn a game around to the tune of a 9-2 win.

Miguel Andujar hit a homer in the 7th for the final score, 9-2.

Luis Cessa got the final out of the 7th, relieving Nelson — and then Cessa pitched a shutout 8th.

Ryan Yarbrough used to be a reliever or bullpen-day starter, but has been extended this year to full-time starter, throwing 5 to 6 innings per start. In this game he ended up pitching a complete game.