Francisco Lindor hit 3 homeruns, including the go-ahead, game-winner to break a 6-6 tie in the bottom of the 8th, carrying the Mets to a 7-6 victory and 2-1 series win. The loss ruined a gallant Yankee comeback capped by a game-tying 2-run homer by Giancarlo Stanton in the 7th inning, and pushed the 79-64 Yankees out of a playoff spot, as Toronto won again.

Yankee rookie starter Clarke Schmidt pitched pretty well, but was done in by Yankee defense. In the bottom of the 2nd, Gleyber Torres made an error to start off the inning, and after 2 outs, Lindor hit the first of his 3 homeruns — a 3-run job to vault the Mets ahead 4-2; Gleyber’s error making all the runs unearned.

Schmidt worked around an error by Gio Urshela at 3rd base in the 4th, but left with 1 out and bases loaded in the 5th (after a single, double, hit by pitch). Andrew Heaney came in to allow a sacrifice fly to James McCann and give the Mets a 5-2 lead at the time.

2. Torres Makes Up for It

At about this time on Twitter we were making WAR comparisons of Gleyber Torres to Bobby Meacham and Fred Stanley — when Gleyber stepped up and hit a 2-run homer in the 6th to pull the Yanks to within 5-4.

But Lindor hit his 2nd homer of the game against Wandy Peralta in the bottom of the 6th to give the Mets a 6-4 cushion.

As Lindor rounded the bases he put his fingers to his mouth and made a whistling motion at Gleyber Torres — a reference to Mets’ claims the Yankees were whistling to their batters to tell them what pitch was coming the day earlier when they thought Mets starter Taijuan Walker was tipping his pitches.

Afterwards, Joey Gallo said Wandy Peralta had whistled Saturday “just trying to liven up the dugout” and it was “definitely not for pitch tipping.”

Giancarlo Stanton would have none of Lindor’s taunts — hitting a MISSILE to left for a 2-run homer and tie game 6-6 in the top of the 7th (DJ LeMahieu had led off with a single).

Stanton slowed to a walk at 2nd base, and had words with Lindor and Javier Baez. By the time Stanton crossed home plate both benches emptied, with Baez and Lindor motioning for Giancarlo to come back over for fisticuffs.

Order was restored but Lindor got last laugh in the 8th when Chad Green came in to cough up yet another homer — Lindor’s 3rd of the game and the game winner.

Meanwhile Katie Sharp let go with a fuselage of tweets on Green’s propensity to give up homers. 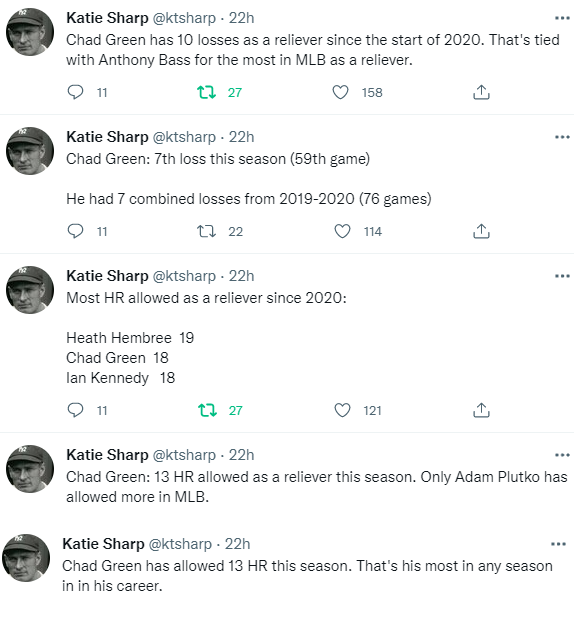 Aaron Judge had to leave the game in the 3rd inning complaining of dizzyness. He had been up twice and struck out twice. Judge made a diving catch the night before but that wouldn’t explain the dizzyness. After the game manager Aaron Boone said he was ok and would play tomorrow. The dizzyness was left unexplained.