The Yanks can’t figure out how to win a game anymore. Every game, they lose another way. In this one, they wasted a great start by Domingo German, and a late 3-1 lead as Boston beat them 6-5 on a Sunday night, National TV game. NY could have won it in the 9th but got a really bad call from the ump on a 3rd strike that was a foot outside the strike zone. It gave the Yanks their 4th straight loss, and 13th of their last 16. A horrid stretch that has plummeted NY to 4th place, 6.5 behind Tampa, with a record of 31-29.

Domingo German allowed a homerun in the 1st inning to Alex Verdugo, and then cruised. He challenged hitters, worked the zone, used his curveball to great effect, and carried the Yanks into the 6th up 3-1. He was cruising.

German was helped in the top of the 4th, when Miguel Andujar made a great throw from left to nail Xander Bogaerts trying to stretch a single into a double.

Aaron Boone lifted German in the 6th with a runner on 2nd and the dangerous lefty Rafael Devers coming up. German was only at 84 pitches and had already retired Devers twice on the afternoon but Boone opted to bring in the lefty Lucas Luetge, who got Devers.

The move would backfire in the 7th.

2. Sanchez & Judge Get Yanks the Lead

Meanwhile the Yankees got German 3 runs. In the bottom of the 1st, after DJ LeMahieu made out, Aaron Judge singled, Gleyber Torres singled, and Gio Urshela singled to load the bases with 1 out.

Gary Sanchez then doubled home 2 to give NY a 2-1 lead off Boston starter Garrett Richards.

Chris Gittons struck out for the 2nd out, so the Yanks were never able to get an extra run in from 3rd. Gittons went 0-4 on the day, striking out 3 times.

In the 4th, Miguel Andujar hit a one out single, followed by walks to Brett Gardner and DJ LeMahieu to load the bases for Aaron Judge who hit into a fielder’s choice for a run and 3-1 NY lead.

And it remained 3-1 NY into the 7th. Yankee fans were sensing a win — but Lucas Luetge walked the leadoff batter then allowed a 2-run homer to Marwin Gonzalez and just like that it was tied.

4. Yank Defense Blows It in the 8th

Wandy Peralta pitched the 8th for NY — somehow the Yankee bullpen has become very dependent on Lucas Luetge and Wandy Peralta and it was never supposed to be that way.

Peralta allowed a popup into no-mans land in short right that Clint Frazier should have had easily but DJ LeMahieu backpeddling, tried to make a catch on and dropped the ball. It seemed Frazier’s fault — he should have called off LeMahieu but was a little late to the ball and hesitant to take charge. The ball dropped for a double.

THIS BALL HAS TO BE CAUGHT THIS IS A NIGHTMARE pic.twitter.com/CcwheqHV4G

The Red Sox then small-balled the run home — a groundout to advance the runner to 3rd with 1 out, and a sac fly by Xander Bogaerts.

5. Yanks Tie It in 9th; Mighta Won if Not for Blown Ref Call

In the bottom of the 9th, Aaron Judge worked a 1-out walk off Boston’s ace reliever Matt Barnes, and Gleyber Torres doubled Judge home — tie game!

Urshela struck out but Gary Sanchez — who was 2-4 with a walk on the day to that point — was intentionally walked to bring up Rougned Odor.

Odor worked the count to 3-2 on Barnes, then walked to load the bases — but no — the ump called the pitch a strike 3 — even though it was a foot outside the strike zone.

The umpire called strike three on this pitch to send Red Sox-Yankees to extra innings. pic.twitter.com/gNxVp4aixn

Yankee Twitter blew up at the call. Even former Yankee Phil Hughes weighed in.

The Gamecast on ESPN showed it as a ball way outside (7th pitch below). 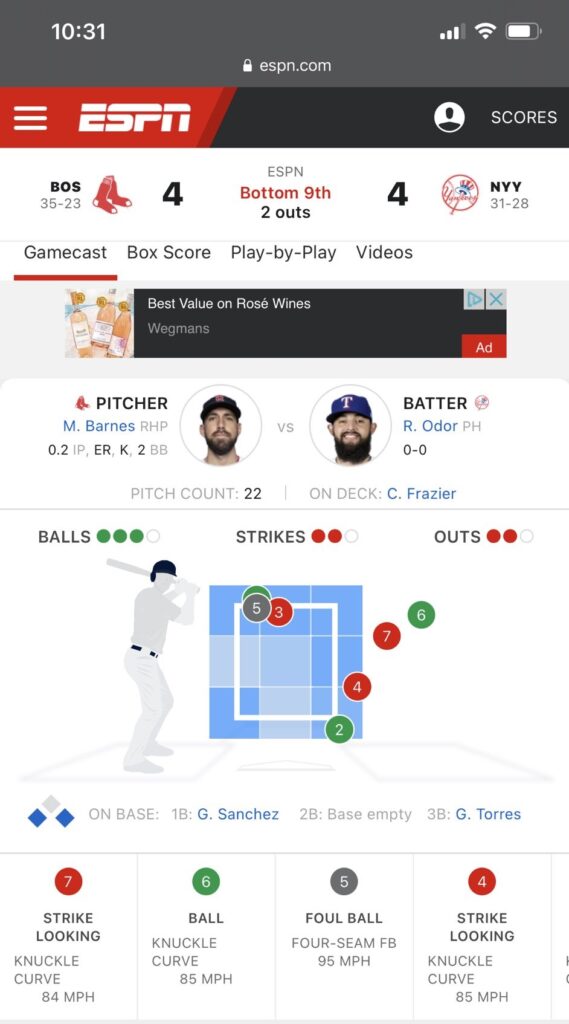 In the top of the 10th Luis Cessa inherited the leadoff runner on 2nd under COVID rules, and walked a batter to put 2 on. They were sacrificed to 2nd and 3rd, 1 out — but Cessa got a groundout to 2nd to keep the runners in place and get the 2nd out.

Cessa looked like he’d get out of it — until Boegarts singled in 2.

Down 6-4 in the bottom of the 10th, Clint Frazier led off with a hit by pitch by Phillips Valdez — and the Yanks were in business — 1st and 2nd nobody out.

But Miguel Andujar hit into a double play — the Yanks’ 3rd on the day.

Tyler Wade beat out an infield single and Gonzalez threw the ball away trying to throw him out at 1st — the run scored to make it 6-5 Boston, and Wade went to 2nd.

But DJ LeMahieu grounded out to end it.