The incredible home run inning game: the score was 2-2 in the 4th when Gary Sanchez lasered a double one hop off the wall in left scoring Clint Frazier to make it 3-2. Then:

Yankee Twitter was in a Tizzy.  A small sampling: 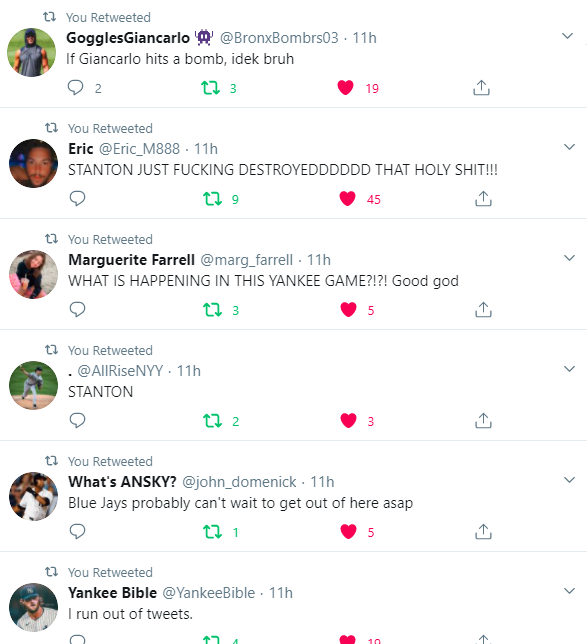 Voit! Hits one to Detroit! Here is Cool Hand Luke with his major league leading 20th home run of the year!

Kraken gets in on the show. pic.twitter.com/G86pXS2eSh

Giancarlo Stanton ended up 4-5 on the day.

The Answer to the Question

The answer to the question was Chris Anderson. The question, posed by the wife: Who’s Pitching?? Anderson had come in to pitch the 2nd thru 4th on a Toronto bullpen day. After the Gleyber homer, Toronto brought in Wilmer Font and things calmed down.

It's Gleyber Day! Ohhhh like a good Gleyber, Torres is there! pic.twitter.com/aMlrsm4BxJ

After the game, Gary Sanchez said he is trying to “go back to basics and just hit the ball and put it in play.” Great news.

Gary Sanchez discusses "going back to the basics," as he has his 1st multi-hit game of the season. @MontefioreNYC pic.twitter.com/xVUR81bUsp

Adam Ottavino pitched a shutout 8th (low key good news) and the Yanks cruised to the 9th up 10-3. Jonathan Holder came in to hold ’em, but he couldn’t. An off night for Holder — after the first out, a double, infield single, walk, infield single, walk had 2 runs across and bases loaded. Aroldis Chapman came in with bases loaded and allowed a single to make it 10-7, tieing run at the plate, 1 out — but then he got in gear and struck out the last 2 batters for the save.

The Yanks swept the 3-game set with Toronto and have now won 8 in a row, are 29-21, 2.5 ahead of Toronto for 2nd place. Tampa swept a double header vs Baltimore so the Yanks actually fell a half game to 3.5 games behind Tampa for 1st with 10 games to go.

DJ LeMahieu is back leading the American League in batting average at .373 after his 3-4 Wednesday night. He is ahead of Tim Anderson who is at .365. LeMahieu is also leading in On Base Percentage (OBP) at .426 and On Base plus Slugging (OPS) at 1.067. His overall: 10-23-.373. He is spectacular defensively in the field for the Yanks at whatever position he plays — he is playing 2nd this year. He could be the MVP.