J.A. Happ pitched great, Aaron Judge pulled a monster home run to left to tie the game in the 4th, and Tyler Wade hero-launched a monster homer to right in the 5th to put the Yanks ahead 3-2 heading into the late innings. But then, inexplicably, with a tight 3-2 ballgame in the 7th, Yankee Stadium started doing the wave. This seemed to shake up Tommy Kahnle, who served up a 2-run bomb to Justin Smoak and that was the old ballgame. Yankee fans at the stadium and on twitter felt the wave had effected Kahnle.

@Yankees the wave going around for the 6th time! #LetsGoYankees pic.twitter.com/e85SlWxJWJ

Here’s an off-the-cuff sampling of some of what was being said on #YankeeTwitter:

But there it was. And it wasn’t just a wave, “it was the strongest wave I’ve ever seen”, denounced Yankee fan @NYSportsChick. And then the 2-run bomb by Smoak to put Toronto ahead. And then the wave stopped. The loss, coupled with a Houston win, put the Yanks 1.5 behind Houston for best record but Houston owns the tiebreaker so the Yanks are essentially 2.5 behind Houston with 7 games to play. Yankee Stadium essentially waved goodbye to guaranteed home field advantage throughout the playoffs. This is supposed to be the place of Mystique and Aurora.

Finishing with the best record is not an end-all of course, and there are other things to consider:

The Real Reason for the Loss = Yankee Offense

Some blamed Kahnle’s surrender of the homer ball to the fact that he was “hungover as fuck” from the AL East championship celebration the night before, where he was caught doing this:

@M_Marakovits mentioned it during Gardner’s interview last night but here is a pretty good look at Kahnle’s tarp slide. 😂😂😂😂 pic.twitter.com/McLAFf4zWT

The real cause for the loss of course was the Yankee offense, which didn’t get much going against Jacob Waguespack and the Toronto bullpen of 5 (five) relievers thrown at the Yanks. Waguespack pitched 5 solid innings, allowing only the homer to Judge. As we discovered when he pitched against the Yankees last week, Waguespack is not an American Indian but of German ancestry; the name spelling changed via French influence. The name is common in Louisiana which is where Jacob is from.

The Yanks, down a run in the 9th, seemed to get screwed by the home plate ump Joe West — he of infamous reputation — who called an apparent ball 4 to Brett Gardner as a strike. That changed the tenor of the inning.

It doesn't get worse than this.

Umpire Joe West blew 16 calls on the night, but none were worse or more significant than this one to Brett Gardner. It missed the zone by 5.23 inches. #Yankees v #BlueJays pic.twitter.com/lJfMyKh4is

Good news — Happ was a Happy Happ — pitching great through 5 innings, and Adam Ottavino pitched well in relief of Happ. More good news — Aaron Judge not only pulled the homerun to left but went 2 for 3 with a walk to raise his average to .272.

Tyler Wade is red hot as a hitter and is making a case for being placed on the post season roster, versus say, Clint Frazier who had trouble catching a fly ball again.

DO NOT LET CLINT FRAZIER PLAY THE OUTFIELD pic.twitter.com/JWNirqmyBi

Frazier made up for it in the 4th with a bullet throw to 2nd.

Clint Frazier throwing that ball like his job depends on it, because it does. pic.twitter.com/w2jZtLazq9

In the top of the 1st, Brett Gardner raced over from centerfield to take the burden off Frazier from making this catch — so it seems Yankee outfielders are aware of Frazier’s lack of confidence out there:

Wade’s homer gave him great favor on #YankeeTwitter where he has been ripped relentlessly this year (as has Frazier’s defense).

Aaron Judge has been getting hotter and hotter. Most of his homeruns recently have been to the opposite field. This was the first in a while that was pulled to deep left.

Yes Network put up these statistics to show how Judge’s bat has been more dangerous since he made a minor adjustment to his stroke a month ago: 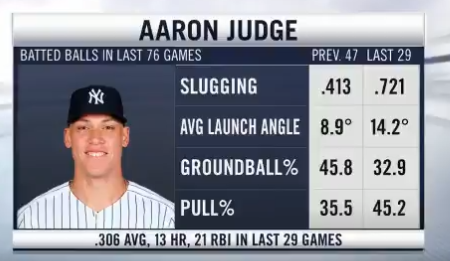 Happ, who always gives good interview, said his fastball is faster these days.

Aaron Boone thought J.A. Happ's fastball was as lively tonight as it has been this season, and Happ agrees. #YANKSonYES pic.twitter.com/2B4RGi2J2t

Gleyber Torres knee buckled on him on a grounder in the 4th inning. He stayed in the game but was later removed. Yankee Twitter holds it’s breadth that his knee is ok.