On a hot, muggy, sticky, humid night in the Bronx, the Yankee lineup didn’t muster any energy at all in losing to rookie pitcher Taylor Clarke (who came in 3-3 6.10), and the Arizona bullpen. Aaron Boone said afterwards that Clarke’s slider was sharp.

J.A. Happ pitched ok — a quality start of 6 innings, 3 runs — and marched off the mound with utter confidence at the end of every inning. Aaron Judge helped him out with a terrific catch in the 3rd.

But a huge Yankee crowd of over 47,000  sweltering in the summer heat murmured to a silence when #14 Tyler Wade stepped to the plate in the 6th after Edwin Encarnacion doubled in the first Yankee run to make it 3-1.

Tyler Wade? Why was he in the game and then a quick look at the scoreboard showed he was batting cleanup. This meant of course that Luke Voit had injured himself on his last time up when he struck out swinging.

Wade popped out to 3rd.

Yank Lineup Firing on Half Cylinders

With DJ LeMahieu out, Gary Sanchez out, Giancarlo Stanton still mysteriously out, and Clint Frazier in the minor leagues (icing his batting average at .283 with one day left to the trading deadline), the Yankee lineup was firing on half cylinders. Didi Gregorius and Gleyber Torres went 0-7. Aaron Judge continued his mini slump, going 0-3 but walked once and scored on the Encarnacion double.

And the Yankees are on the board! Edwin Encarnacion hammers a double to the wall in right-center. #YANKSonYES pic.twitter.com/U8V6kiuBMh

In the 8th inning, Tyler Wade hit a homerun. Kismet. It was his second one ever.

Tyler Wade had been batting over .300 in AAA.

Tyler Wade hit his second-career home run tonight. He was just looking for one spot and the pitch was right there to hit. #YANKSonYES pic.twitter.com/JAUErqozPP 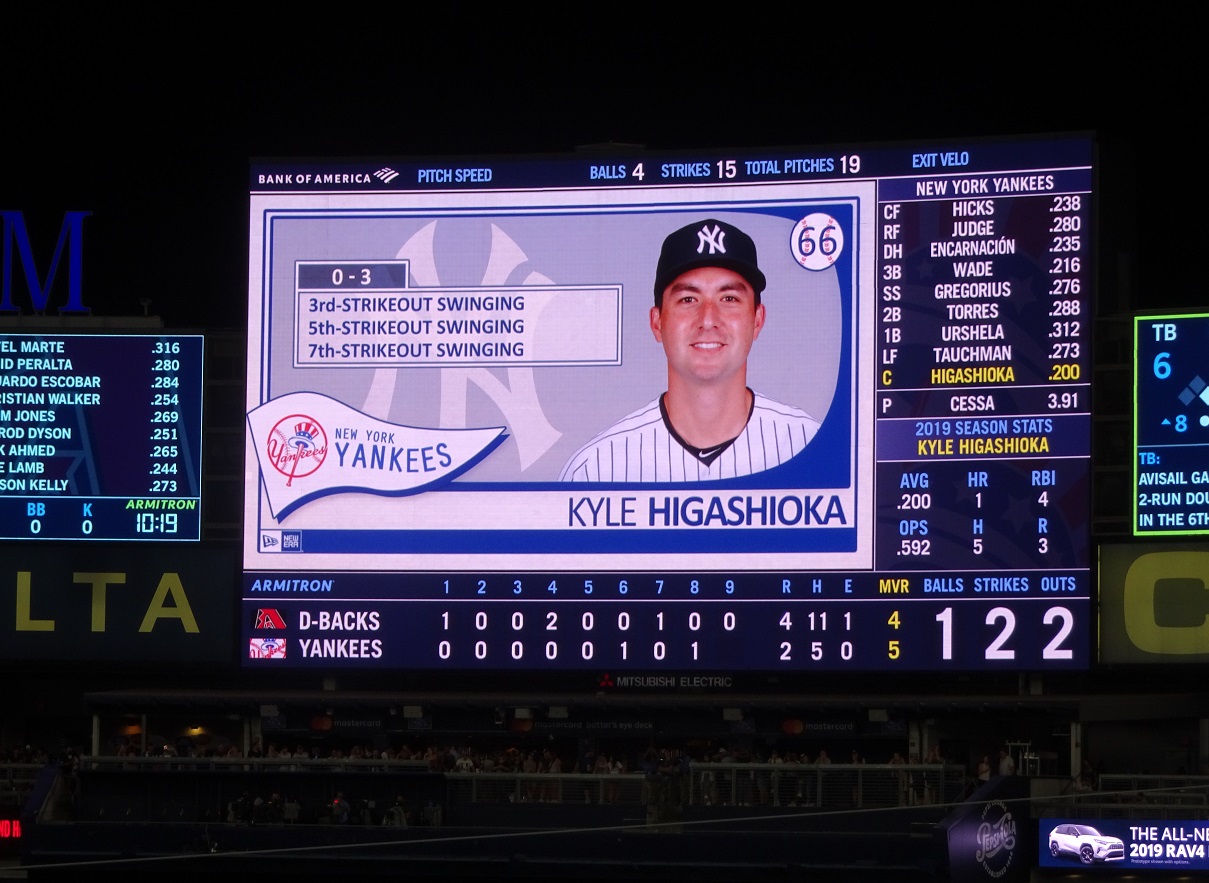 Luis Cessa came in and allowed a homerun to the first batter he faced, but then pitched another good game — 3 innings, 1 run.

This was the last evening before the trade deadline. During the game news broke that Trevor Bauer had been traded from Cleveland to Cincinnati — causing disbelief and some cursing in the crowd.

After the game, JA Happ gave his usual humble, confident, logical interview. He said he’s corrected something in his delivery that has caused his 4-seam fastball to be better lately.

J.A. Happ: I thought it was fine. I threw the ball with conviction tonight. … They were just a little bit better tonight. pic.twitter.com/ngC9HHLd1f