There are only ten third basemen in the baseball Hall of Fame, by far the least of any position. There are guys in there like Freddie Lindstrom and Pie Traynor and George Kell, and well-known greats like Frank “Home Run” Baker, Brooks Robinson, Eddie Mathews, George Brett, and Mike Schmidt. Graig Nettles is clearly in the company of the players there. Who would you rather have on your team — Freddie “Who?” Lindstrom or Graig Nettles? Like Brooks Robinson, Nettles was one of the great defensive third basemen of all time. Incredibly, he only won two gold gloves (the same amount that Wade Boggs won as a Yankee) — they used to give it to Buddy Bell every year in the late seventies and early eighties even though Nettles was at least his equal.

Like Robinson, Nettles won a World Series with his defense, although to much less fanfare. Robinson became a household name in 1970 for his defensive heroics in the World Series. Nettles’ heroics came in 1978, when he speared line drive after line drive with acrobatic, ballet dives to his left, or behind him to his right down the third base line, and then would come the perfect lob throw to first to always just nab the runner. 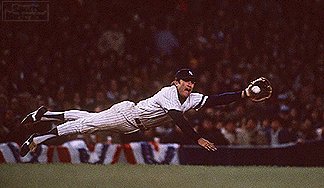 You always felt that Nettles could gun the ball to first to beat any runner by a mile, but was so good he’d toy with everyone — runners, fans, and George Steinbrenner alike — in casually launching his semi-arc to first, perfectly timed to just beat the runner by a stride, every time.

At the plate, Nettles had league leading power — he led the league once in homers (32 in ’76) and just missed once (37 in ’77), and perennially was amongst the top 5 to 7 in the league in homers, even though that number was generally in the twenties. His average was usually around .250. Now before you dismiss those numbers, remember that the ball was dead — D E A D — dead in the seventies. It was so dead, they invented the designated hitter. It was so dead, they seriously thought about introducing orange baseballs at night games so the hitters could see the ball. So Nettles’ .250 would probably be a .280 average in the 1990s thru 2000’s. And his 20-something homeruns would be 40-something every year today (with the lively baseball that is causing lots of homers and lots of strikeouts). And if he did that, how many career home runs would he have hit? As it was, he approached 400, finishing with 390. That’s a lot of homeruns for a player who played in the dead-ball 70’s.

Nettles Holds Record for Homeruns by 3rd Baseman in AL

There are only three third basemen in history who finished with more homeruns than Nettles — Mike Schmidt, Eddie Mathews, and most recently, Adrian Beltre. Nettles holds the American League record for homeruns by a third baseman (319)! He’s also currently 24th all-time in games played with 2700. Think about that — of all the players to ever play major league baseball, only 23 have played more games than Nettles — and he played most of them at freakin’ third base, the hot corner, playing great defense there to boot.

What About Bobby Murcer?

Which brings us to Bobby Murcer… if Graig Nettles belongs in the hall of fame, as I’ve surely proven, what do you do with Bobby Murcer? Murcer was the star of the Yankees throughout the early seventies — not Nettles. Murcer was the straw that stirred the Yankees’ fourth-place drink; Munson was number 2 star, and Nettles was number 3. Murcer was the next Mickey Mantle, the hope of the future for a baseball franchise that was mired in mediocrity and was being mismanaged by middle management at CBS. None other then Ted Williams described Murcer in 1972 as baseball’s best chance for a triple crown (leading the league in homers, rbis, and average).

In the 1990’s and early 2000’s, people talked about Bernie Williams as the consummate star; the Joe DiMaggio of his day, combining centerfield defense with hitting for average with hitting for power. The comparison wasn’t far off — remember, DiMaggio played in the lively-ball 30’s and 40’s, so Williams lively-ball-90’s statistics compared well to DiMaggio’s. Williams won the batting title in 1998, hitting .334 with 26 homers and 96 RBI, one of his best overall seasons. Ironically, those were almost identical numbers to Murcer’s 1971 campaign, when he hit .331 with 25 homers and 94 RBI. But those were the dead-ball 70’s remember. Murcer nearly led the league in all categories, sparking Ted Williams‘ comments. Those numbers projected in today’s lively- ball era might equate to like 45-50 homers and 140 RBI and a .355 batting average. Do you think a Yankee centerfielder putting up those numbers today would be the talk of baseball? 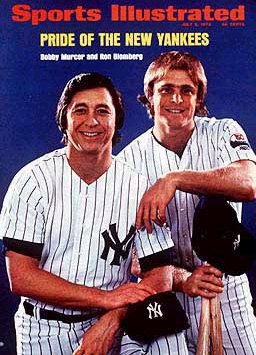 Murcer has been quoted as saying if he hadn’t been traded by the Yankees, and played his whole career at Yankee Stadium, he would have made the Hall of Fame. Sounds insane, but you know what, he’s not far off, especially if he didn’t play ball in the dead-ball ’70’s. Still, those are big ‘ifs’. Murcer was traded, a bunch of times. He didn’t play in the ’90’s. He finished with 252 homers and a .277 lifetime average. Tough luck Bobby.

In 2000, Tony Perez was inducted into the Hall of Fame. That should have opened up the door for Nettles. Perez was not better than Murcer; you would not have found a GM in baseball in the 1970’s who would have traded Murcer for Perez. And no way was Perez better or more valuable than Nettles.  Tony Perez was a star first baseman. His job was to hit. He hit 379 homeruns to Nettles’ 390. Perez was mostly known as a big RBI man. He drove in 1,652 RBI on the big Red machine; Nettles 1,314. Perez hit .279 lifetime; Nettles .248. But Nettles played third, an important defensive position, and played it with style. No contest.

In the early 2000’s, the Yankees organization announced their greatest team with best players at every position; they named Graig Nettles as their 3rd baseman. It can be argued that is still the case, even with Alex Rodriguez having played 3rd for the Yanks for 10 years, winning two MVP’s and the 2009 World Series! As we found out later, ARod had a little “help”. Nettles was once asked about steroids, and — always a man of honesty — said he would have certainly taken them if they were available in the 70’s. Imagine his numbers if he did!!